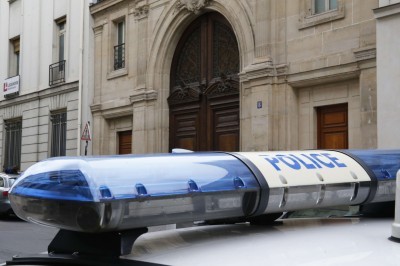 A police car is seen outside the Paris offices of Google as French police carry out a search as part of a tax fraud investigation.
TECHNOLOGY French police raid Google over tax issue
Police raided Google’s French headquarters Tuesday looking for evidence of “aggravated tax fraud,” one of Europe’s most conspicuous attempts yet to cast a U.S. technology leader as a manipulative scofflaw.

The probe reflects European indignation looming over Google and other U.S. tech companies as they amass huge amounts of cash while cutting their tax bills through complex maneuvers that shield their profits.

Google issued a statement Tuesday maintaining that it complies with all laws. The company, owned by Alphabet, also said it is cooperating with the French investigation.

Other major tech companies, including Apple and Facebook, also have been skewered in Europe for scrimping on their tax bills. At the end of last year, the U.S. technology sector had stockpiled $777 billion in cash, nearly half of the $1.68 trillion held by non-financial companies in the country, reported a study by Moody’s Investors Service.

Nearly 90 percent of the cash held by five tech companies is being kept in overseas accounts.

France’s investigation is focused on an Ireland subsidiary that enables Google to do business with customers across Europe while minimizing its taxes, known as profit-shifting. European regulators have been pressing companies to pay taxes in the jurisdictions in which they do business.

Monsanto rejected a $62 billion takeover offer from Bayer as too low, while saying it remains open to further deal talks, putting pressure on the German pharmaceutical giant to raise a bid that has already sent its stock tumbling.

“We believe in the substantial benefits an integrated strategy could provide to growers and broader society, and we have long respected Bayer’s business,” Hugh Grant, chief executive of the U.S. seeds company, said in a statement Tuesday. “However, the current proposal significantly undervalues our company and also does not adequately address or provide reassurance for some of the potential financing and regulatory execution risks related to the acquisition.”

Bayer will likely come back with a higher bid, Jonas Oxgaard, an analyst with Sanford C. Bernstein & Co. in New York, said in a note, adding that an offer below $135 per share would be “challenging” for Monsanto to accept.

Buying Monsanto would create the world’s biggest supplier of farm chemicals and seeds.

● Twitter is giving users more room to tweet. In coming months, photos, videos and other media won’t count against what is now a 140-character limit. The change is another attempt by the San Francisco company to make its messaging service easier to use and to attract new users. Twitter has struggled for years to find a cure for slow user growth. The number of people using Twitter is less than one-fifth those actively using Facebook.

● Hewlett Packard Enterprise said it plans to spin off and merge its enterprise services business with Computer Sciences. HPE, which houses the former Hewlett-Packard’s corporate hardware and services division, said the merger is expected to produce cost synergies of about $1 billion in the first year after close.

● Americans ramped up their purchases of new homes in April to the highest level since January 2008, a strong start to the spring buying season. The Commerce Department said new home sales jumped 16.6 percent last month to a seasonally adjusted rate of 619,000, up from 531,000 in the previous month. March’s total was revised higher.

● Increased mortgage borrowing was behind a 1.1 percent rise in U.S. household debt in the first quarter, with slowdowns in other areas such as credit-card balances and auto loans, according to the Federal Reserve Bank of New York. Total mortgage debt rose 1.5 percent from the final quarter of 2015 to $8.37 trillion, the highest level since 2011, according to the New York Fed’s quarterly report on household debt and credit. Auto-loan debt rose to a record high of $1.07 trillion going back to 2003.

● Huawei Technologies filed patent suits against Samsung Electronics in the United States and China after the two were not able to reach a licensing deal over the use of technology fundamental to how mobile networks operate. In a lawsuit filed Tuesday in federal court in San Francisco, Huawei claims Samsung infringes as many as 11 patents related to the industry standard for fourth-generation mobile devices. It’s seeking cash compensation. In the public portion of the complaint, Huawei doesn’t seek any order to block sales of Samsung products in the United States. The patents cover communications networks and software to operate LTE networks established through international standard-setting organizations, Huawei said.