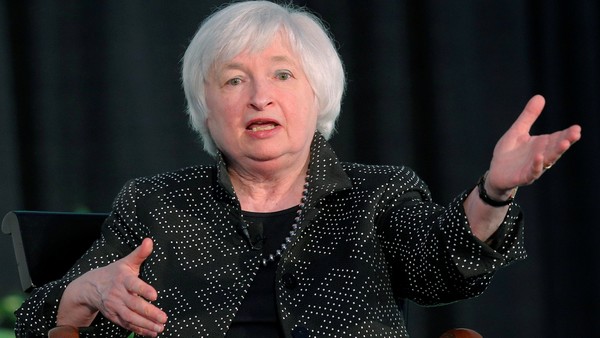 With the pace of US job creation slowing to the lowest level since 2010 investors turn their attention to Federal Reserve chair Janet Yellen for clues on the timing of the next interest rate rise. Here’s what to watch in the coming days:

Investors will tune in to Ms Yellen’s speech to the World Affairs Council of Philadelphia on Monday as they continue to digest Friday’s disappointing jobs report. “Markets will be waiting with bated breath to see whether she strikes a more hawkish tone or one of continued cautiousness ahead of the June FOMC meeting,” said economists at Bank of America.

Following weak job growth numbers, expectations for a rate rise in June slid to just 2 per cent, while odds of a move in July nearly halved to 27.5 per cent from a day earlier, according to Bloomberg calculations of movements in federal funds futures.

The slow pace of hiring comes in contrast to recent hawkish commentary from a handful of Fed officials and from comments in the latest Beige Book, which indicated “tight labour markets were widely noted” across the 12 reporting districts.

Investors will also keep an eye on the Jolts report that Ms Yellen tracks. Economists expect there were 5.65m job openings in April, down from 5.76m the previous month.

On the political front investors will keep an eye on US presidential primaries and caucuses in California, Montana, New Jersey, and New Mexico among others.

Some 475 delegates are at stake in the Democratic primary in California where former secretary of state Hillary Clinton will take on Vermont senator Bernie Sanders. According to an average of recent polls compiled by Real Clear Politics, Mrs Clinton has just a 1.5 percentage point lead over her Republican opponent Donald Trump.

Mrs Clinton has accused Mr Trump of pushing a “dangerously incoherent” foreign policy and having a temperament that risked involving the US in a nuclear war.

Geopolitics in the South China Sea, cyber security and economic co-operation are all subjects that Treasury secretary Jacob Lew and secretary of state John Kerry will discuss when they visit Beijing next week.