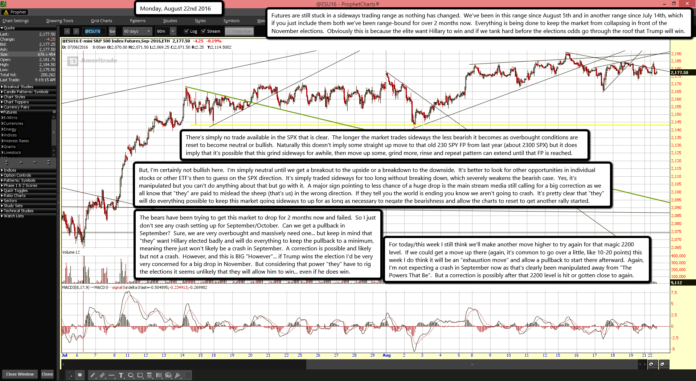 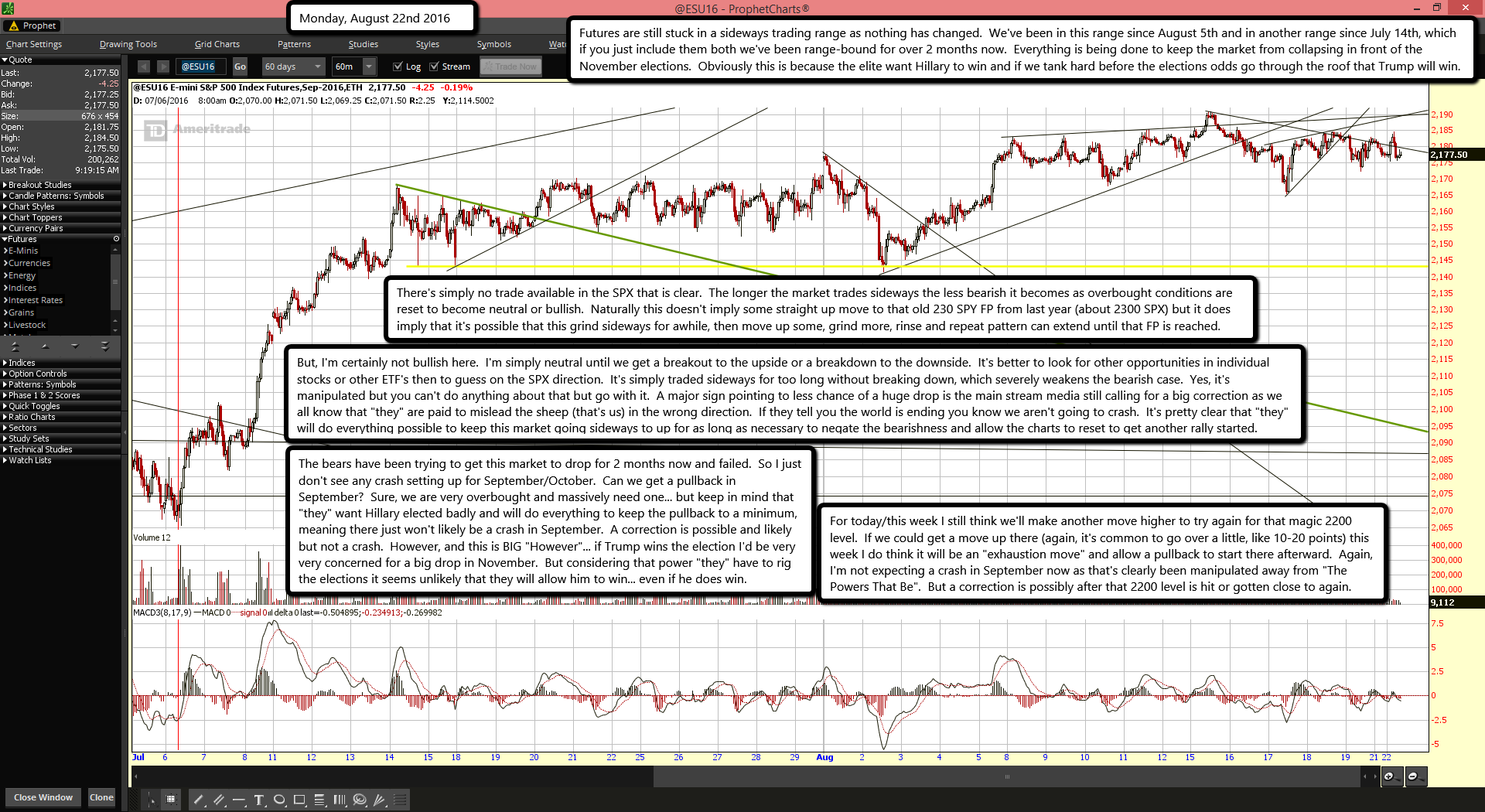 Futures are still stuck in a sideways trading range as nothing has changed.  We've been in this range since August 5th and in another range since July 14th, which if you just include them both we've been range-bound for over 2 months now.  Everything is being done to keep the market from collapsing in front of the November elections.  Obviously this is because the elite want Hillary to win and if we tank hard before the elections odds go through the roof that Trump will win.

There's simply no trade available in the SPX that is clear.  The longer the market trades sideways the less bearish it becomes as overbought conditions are reset to become neutral or bullish.  Naturally this doesn't imply some straight up move to that old 230 SPY FP from last year (about 2300 SPX) but it does imply that it's possible that this grind sideways for awhile, then move up some, grind more, rinse and repeat pattern can extend until that FP is reached.

But, I'm certainly not bullish here.  I'm simply neutral until we get a breakout to the upside or a breakdown to the downside.  It's better to look for other opportunities in individual stocks or other ETF's then to guess on the SPX direction.  It's simply traded sideways for too long without breaking down, which severely weakens the bearish case.  Yes, it's manipulated but you can't do anything about that but go with it.  A major sign pointing to less chance of a huge drop is the main stream media still calling for a big correction as we all know that "they" are paid to mislead the sheep (that's us) in the wrong direction.  If they tell you the world is ending you know we aren't going to crash.  It's pretty clear that "they" will do everything possible to keep this market going sideways to up for as long as necessary to negate the bearishness and allow the charts to reset to get another rally started.

The bears have been trying to get this market to drop for 2 months now and failed.  So I just don't see any crash setting up for September/October.  Can we get a pullback in September?  Sure, we are very overbought and massively need one... but keep in mind that "they" want Hillary elected badly and will do everything to keep the pullback to a minimum, meaning there just won't likely be a crash in September.  A correction is possible and likely but not a crash.  However, and this is BIG "However"... if Trump wins the election I'd be very very concerned for a big drop in November.  But considering that power "they" have to rig the elections it seems unlikely that they will allow him to win... even if he does win.

For today/this week I still think we'll make another move higher to try again for that magic 2200 level.  If we could get a move up there (again, it's common to go over a little, like 10-20 points) this week I do think it will be an "exhaustion move" and allow a pullback to start there afterward.  Again, I'm not expecting a crash in September now as that's clearly been manipulated away from "The Powers That Be".  But a correction is possibly after that 2200 level is hit or gotten close to again.