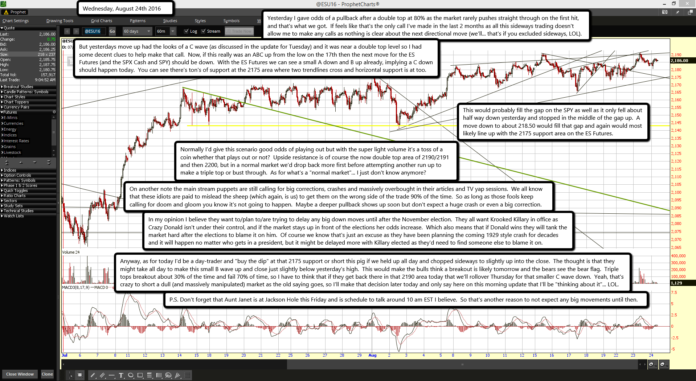 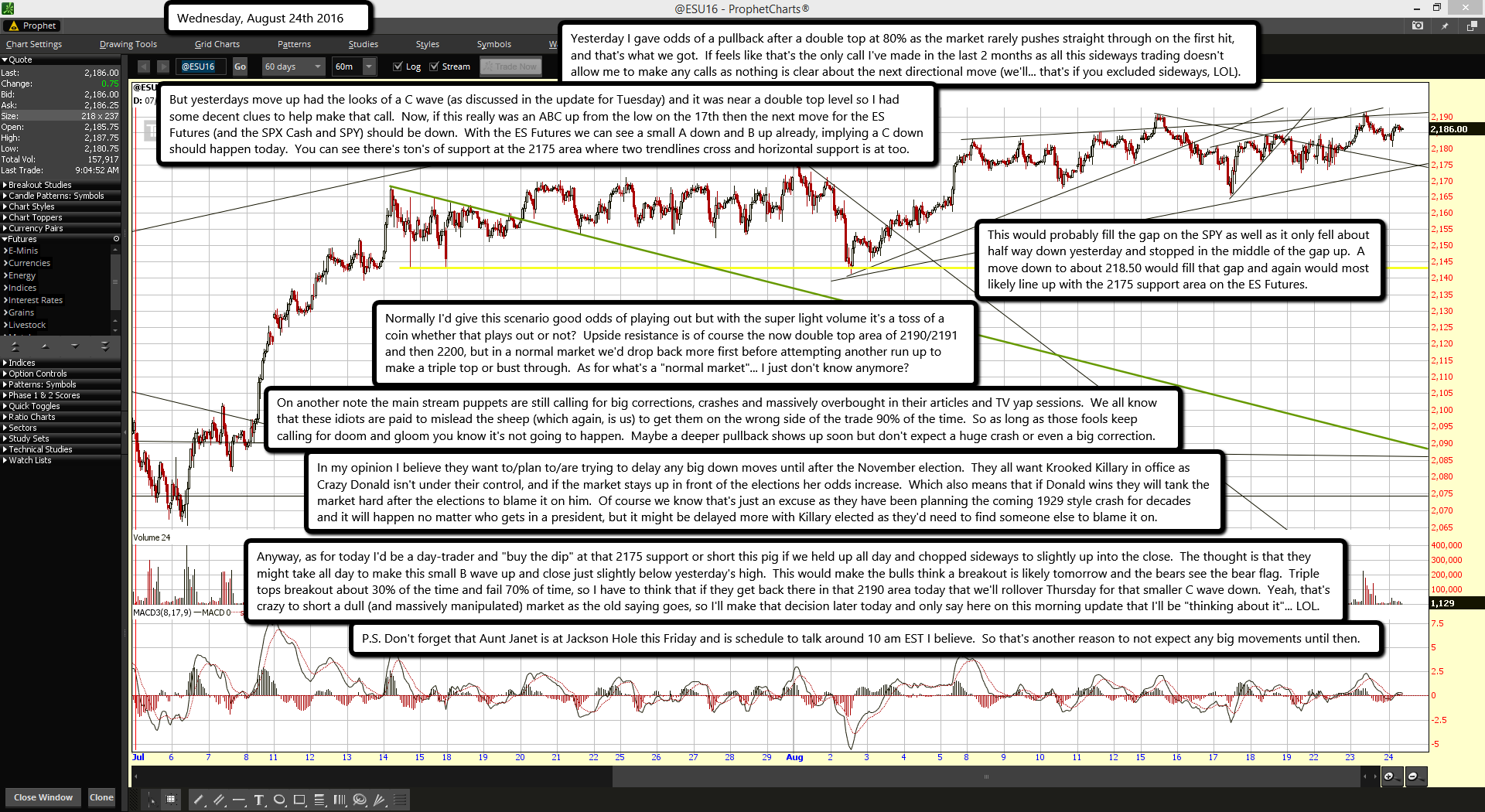 Yesterday I gave odds of a pullback after a double top at 80% as the market rarely pushes straight through on the first hit, and that's what we got.  If feels like that's the only call I've made in the last 2 months as all this sideways trading doesn't allow me to make any calls as nothing is clear about the next directional move (we'll... that's if you excluded sideways, LOL).

But yesterdays move up had the looks of a C wave (as discussed in the update for Tuesday) and it was near a double top level so I had some decent clues to help make that call.  Now, if this really was an ABC up from the low on the 17th then the next move for the ES Futures (and the SPX Cash and SPY) should be down.  With the ES Futures we can see a small A down and B up already, implying a C down should happen today.  You can see there's ton's of support at the 2175 area where two trendlines cross and horizontal support is at too.

This would probably fill the gap on the SPY as well as it only fell about half way down yesterday and stopped in the middle of the gap up.  A move down to about 218.50 would fill that gap and again would most likely line up with the 2175 support area on the ES Futures.

Normally I'd give this scenario good odds of playing out but with the super light volume it's a toss of a coin whether that plays out or not?  Upside resistance is of course the now double top area of 2190/2191 and then 2200, but in a normal market we'd drop back more first before attempting another run up to make a triple top or bust through.  As for what's a "normal market"... I just don't know anymore?

On another note the main stream puppets are still calling for big corrections, crashes and massively overbought in their articles and TV yap sessions.  We all know that these idiots are paid to mislead the sheep (which again, is us) to get them on the wrong side of the trade 90% of the time.  So as long as those fools keep calling for doom and gloom you know it's not going to happen.  Maybe a deeper pullback shows up soon but don't expect a huge crash or even a big correction.

In my opinion I believe they want to/plan to/are trying to delay any big down moves until after the November election.  They all want Krooked Killary in office as Crazy Donald isn't under their control, and if the market stays up in front of the elections her odds increase.  Which also means that if Donald wins they will tank the market hard after the elections to blame it on him.  Of course we know that's just an excuse as they have been planning the coming 1929 style crash for decades and it will happen no matter who gets in a president, but it might be delayed more with Killary elected as they'd need to find someone else to blame it on.

Anyway, as for today I'd be a day-trader and "buy the dip" at that 2175 support or short this pig if we held up all day and chopped sideways to slightly up into the close.  The thought is that they might take all day to make this small B wave up and close just slightly below yesterday's high.  This would make the bulls think a breakout is likely tomorrow and the bears see the bear flag.  Triple tops breakout about 30% of the time and fail 70% of time, so I have to think that if they get back there in that 2190 area today that we'll rollover Thursday for that smaller C wave down.  Yeah, that's crazy to short a dull (and massively manipulated) market as the old saying goes, so I'll make that decision later today and only say here on this morning update that I'll be "thinking about it"... LOL. 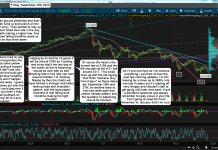 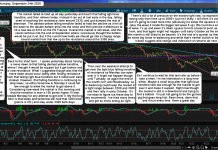