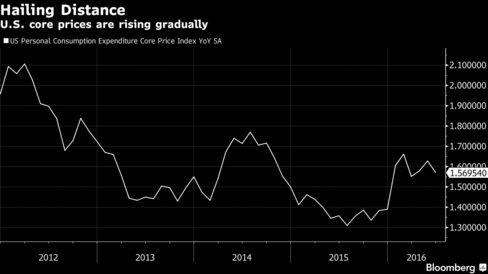 Federal Reserve Vice Chairman Stanley Fischer signaled that a 2016 rate hike is still under consideration, saying the U.S. economy is already close to meeting the central bank’s goals and that growth will gain steam.

“We are close to our targets,” Fischer said in a speech at the Aspen Institute in Aspen, Colorado on Sunday. “Looking ahead, I expect GDP growth to pick up in coming quarters, as investment recovers from a surprisingly weak patch and the drag from past dollar appreciation diminishes,” he added, without giving explicit views on his rate outlook.

Fischer’s remarks come less than a week before Fed Chair Janet Yellen speaks Aug. 26 at an annual symposium hosted by the Kansas City Fed in Jackson Hole, Wyoming. Investors are looking for clues from central bankers on the timing of potential interest-rate increases amid modest economic growth, strong job gains, and only moderate increases in inflation.

“It would be quite an event if Fischer went out so close to Yellen’s speech this week and said something” the Fed Chair disagrees with, said Roberto Perli, a partner at Cornerstone Macro LLC and former Fed board economist. “While I don’t expect Yellen to provide much rate guidance in Jackson Hole, I think she will echo Fischer’s upbeat assessment of the U.S. economy.”

The central bank boosted borrowing costs for the first time in seven years in December, and has left the benchmark lending rate unchanged at its five meetings so far this year. On Sunday, Fischer said the behavior of employment has been “remarkably resilient” even as the economy has passed through several shocks, while GDP growth has been “mediocre at best.”

While the economy has done “less well” in moving toward the Fed’s 2 percent inflation target, Fischer said the central bank’s preferred price benchmark, minus food and energy costs, at 1.6 percent was “within hailing distance of 2 percent.”

Fed officials at their most recent policy meeting in July debated progress on inflation, with most continuing to forecast it would rise to their 2 percent target over the medium term versus a minority group which saw downside risks to prices, minutes from the gathering showed.

“He is pushing back a little bit against the views of the market and some of his more dovish colleagues,” said Michael Hanson, senior global economist at Bank of America in New York. “He is saying it makes sense to consider some additional normalization of rates.”

Fischer spent much of his speech discussing the slowdown in worker output per hour, or productivity, noting that it increased 1.25 percent per year on average from 2006 to 2015, compared with 2.5 percent from 1949 to 2005.

“A 1.25 percentage point slowdown in productivity growth is a massive change, one that, if it were to persist, would have wide-ranging consequences for employment, wage growth, and economic policy more broadly,” he said.

Fed officials raised the benchmark lending rate to a range of 0.25 to 0.5 percent in December. In June, their median estimate predicted at least two hikes this year. Investors see roughly 50-50 odds of a rate increase by year-end, according to the prices of federal funds futures contracts. The rate-setting Federal Open Market Committee next meets Sept. 20-21, and will convene again in November and December.

Reading Fischer’s speech, “you would say they are ready to move,” said Daniel Thornton, a former St. Louis Fed research economist who now works independently. “It seems that he is trying to hint in that direction, but I don’t think they will do anything before the election” in November.

Watch Next: What Have Markets Priced In for a Fed Move?