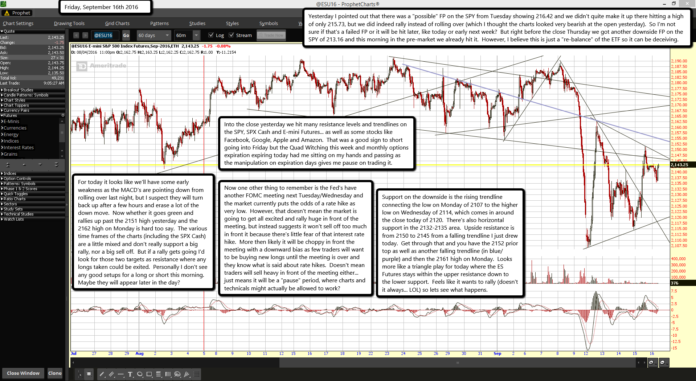 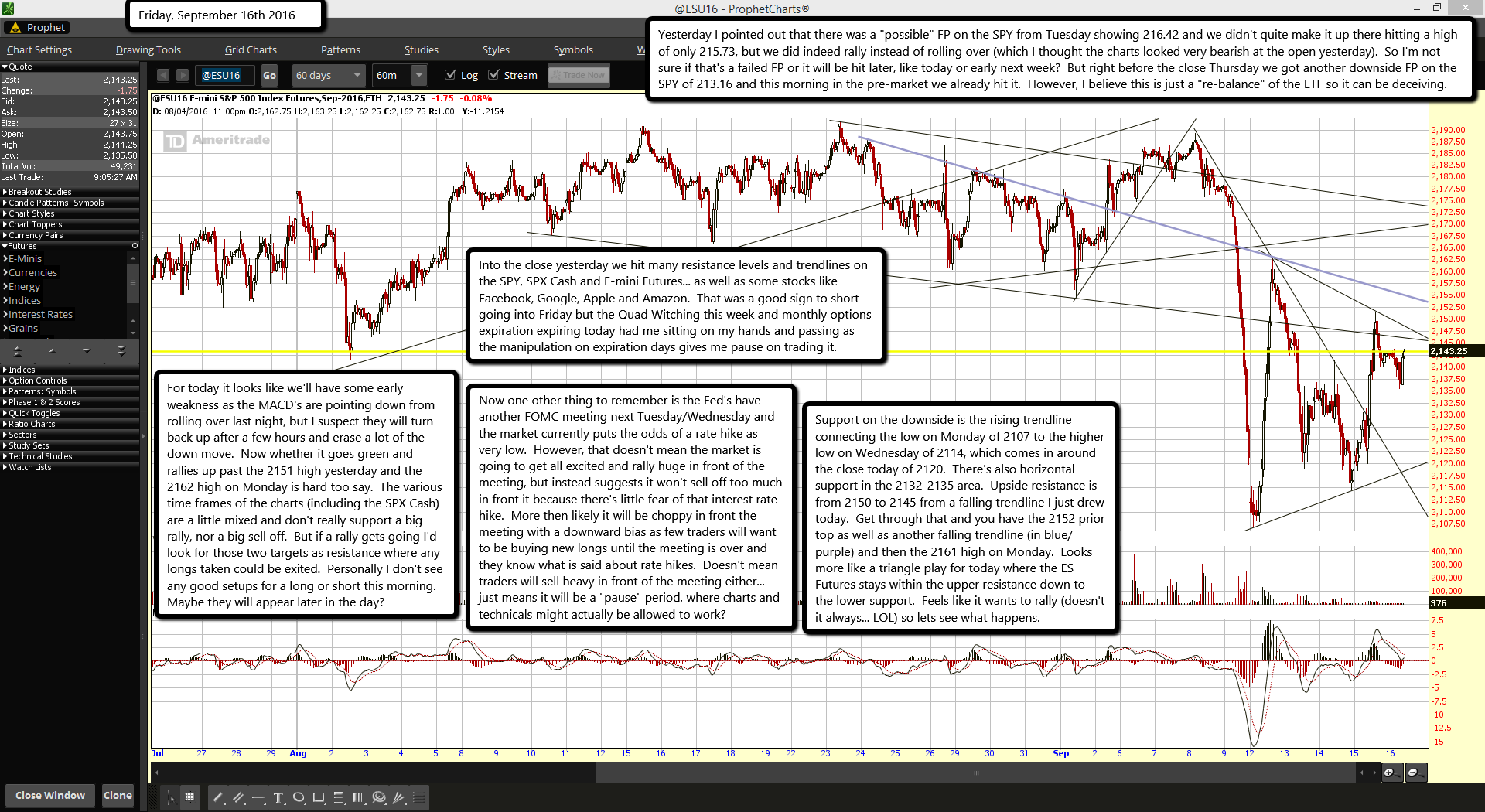 Yesterday I pointed out that there was a "possible" FP on the SPY from Tuesday showing 216.42 and we didn't quite make it up there hitting a high of only 215.73, but we did indeed rally instead of rolling over (which I thought the charts looked very bearish at the open yesterday).  So I'm not sure if that's a failed FP or it will be hit later, like today or early next week?  But right before the close Thursday we got another downside FP on the SPY of 213.16 and this morning in the pre-market we already hit it.  However, I believe this is just a "re-balance" of the ETF so it can be deceiving.

Into the close yesterday we hit many resistance levels and trendlines on the SPY, SPX Cash and E-mini Futures... as well as some stocks like Facebook, Google, Apple and Amazon.  That was a good sign to short going into Friday but the Quad Witching this week and monthly options expiration expiring today had me sitting on my hands and passing as the manipulation on expiration days gives me pause on trading it.

For today it looks like we'll have some early weakness as the MACD's are pointing down from rolling over last night, but I suspect they will turn back up after a few hours and erase a lot of the down move.  Now whether it goes green and rallies up past the 2151 high yesterday and the 2162 high on Monday is hard too say.  The various time frames of the charts (including the SPX Cash) are a little mixed and don't really support a big rally, nor a big sell off.  But if a rally gets going I'd look for those two targets as resistance where any longs taken could be exited.  Personally I don't see any good setups for a long or short this morning.  Maybe they will appear later in the day?

Now one other thing to remember is the Fed's have another FOMC meeting next Tuesday/Wednesday and the market currently puts the odds of a rate hike as very low.  However, that doesn't mean the market is going to get all excited and rally huge in front of the meeting, but instead suggests it won't sell off too much in front it because there's little fear of that interest rate hike.  More then likely it will be choppy in front the meeting with a downward bias as few traders will want to be buying new longs until the meeting is over and they know what is said about rate hikes.  Doesn't mean traders will sell heavy in front of the meeting either... just means it will be a "pause" period, where charts and technicals might actually be allowed to work?

Support on the downside is the rising trendline connecting the low on Monday of 2107 to the higher low on Wednesday of 2114, which comes in around the close today of 2120.  There's also horizontal support in the 2132-2135 area.  Upside resistance is from 2150 to 2145 from a falling trendline I just drew today.  Get through that and you have the 2152 prior top as well as another falling trendline (in blue/purple) and then the 2161 high on Monday.  Looks more like a triangle play for today where the ES Futures stays within the upper resistance down to the lower support.  Feels like it wants to rally (doesn't it always... LOL) so lets see what happens.