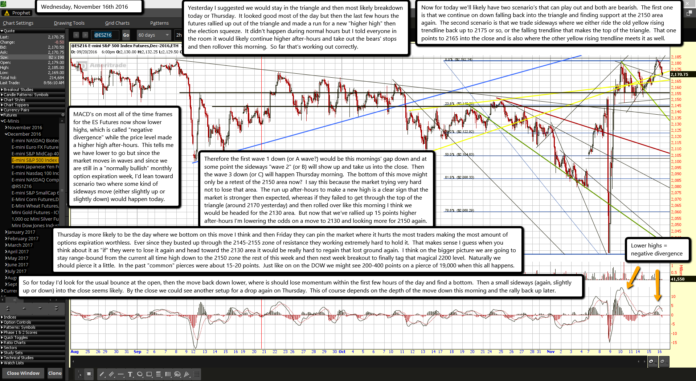 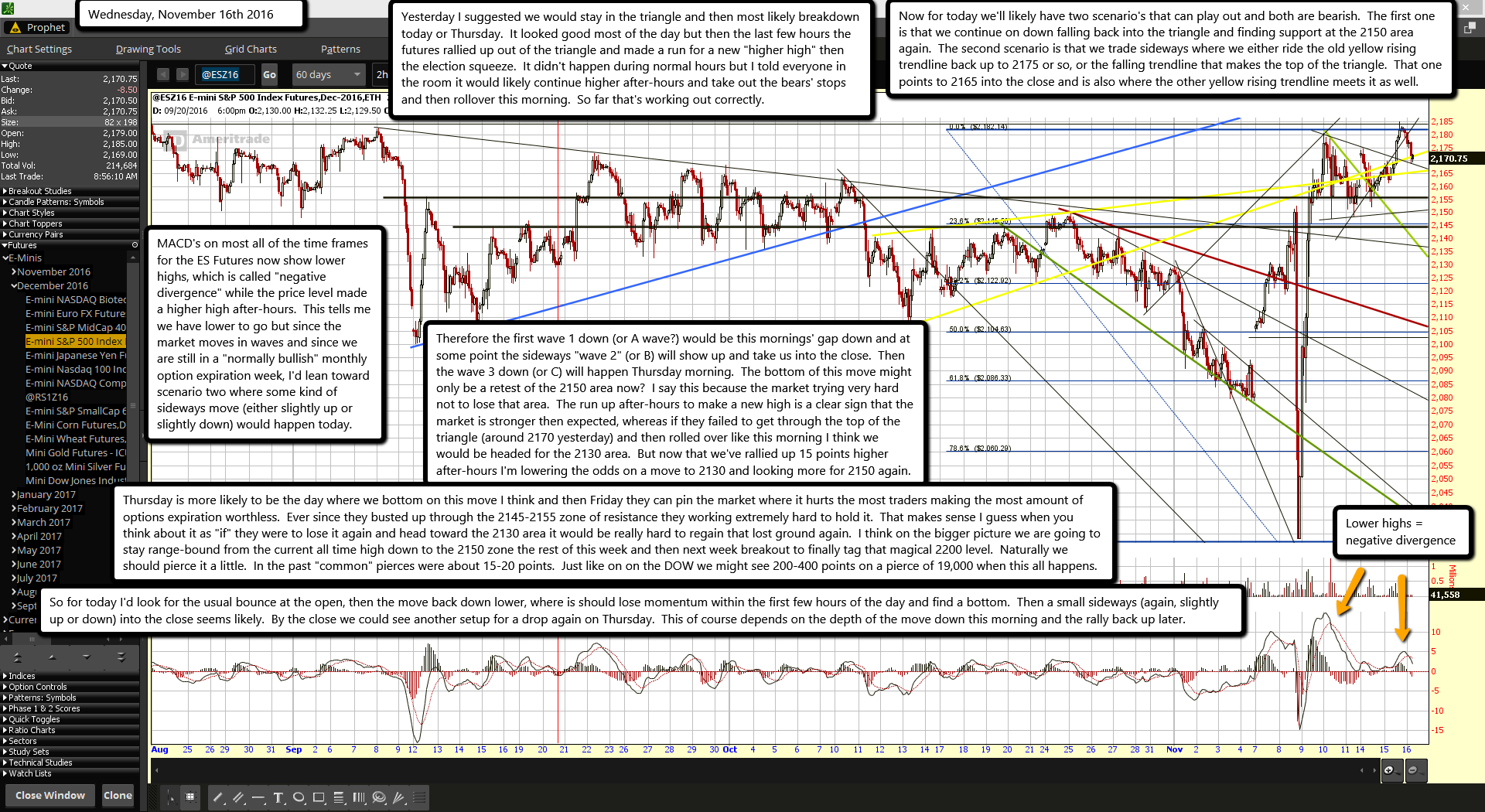 Yesterday I suggested we would stay in the triangle and then most likely breakdown today or Thursday.  It looked good most of the day but then the last few hours the futures rallied up out of the triangle and made a run for a new "higher high" then the election squeeze.  It didn't happen during normal hours but I told everyone in the room it would likely continue higher after-hours and take out the bears' stops and then rollover this morning.  So far that's working out correctly.

Now for today we'll likely have two scenario's that can play out and both are bearish.  The first one is that we continue on down falling back into the triangle and finding support at the 2150 area again.  The second scenario is that we trade sideways where we either ride the old yellow rising trendline back up to 2175 or so, or the falling trendline that makes the top of the triangle.  That one points to 2165 into the close and is also where the other yellow rising trendline meets it as well.

MACD's on most all of the time frames for the ES Futures now show lower highs, which is called "negative divergence" while the price level made a higher high after-hours.  This tells me we have lower to go but since the market moves in waves and since we are still in a "normally bullish" monthly option expiration week, I'd lean toward scenario two where some kind of sideways move (either slightly up or slightly down) would happen today.

Therefore the first wave 1 down (or A wave?) would be this mornings' gap down and at some point the sideways "wave 2" (or B) will show up and take us into the close.  Then the wave 3 down (or C) will happen Thursday morning.  The bottom of this move might only be a retest of the 2150 area now?  I say this because the market trying very hard not to lose that area.  The run up after-hours to make a new high is a clear sign that the market is stronger then expected, whereas if they failed to get through the top of the triangle (around 2170 yesterday) and then rolled over like this morning I think we would be headed for the 2130 area.  But now that we've rallied up 15 points higher after-hours I'm lowering the odds on a move to 2130 and looking more for 2150 again.

Thursday is more likely to be the day where we bottom on this move I think and then Friday they can pin the market where it hurts the most traders making the most amount of options expiration worthless.  Ever since they busted up through the 2145-2155 zone of resistance they working extremely hard to hold it.  That makes sense I guess when you think about it as "if" they were to lose it again and head toward the 2130 area it would be really hard to regain that lost ground again.  I think on the bigger picture we are going to stay range-bound from the current all time high down to the 2150 zone the rest of this week and then next week breakout to finally tag that magical 2200 level.  Naturally we should pierce it a little.  In the past "common" pierces were about 15-20 points.  Just like on on the DOW we might see 200-400 points on a pierce of 19,000 when this all happens.

So for today I'd look for the usual bounce at the open, then the move back down lower, where is should lose momentum within the first few hours of the day and find a bottom.  Then a small sideways (again, slightly up or down) into the close seems likely.  By the close we could see another setup for a drop again on Thursday.  This of course depends on the depth of the move down this morning and the rally back up later.