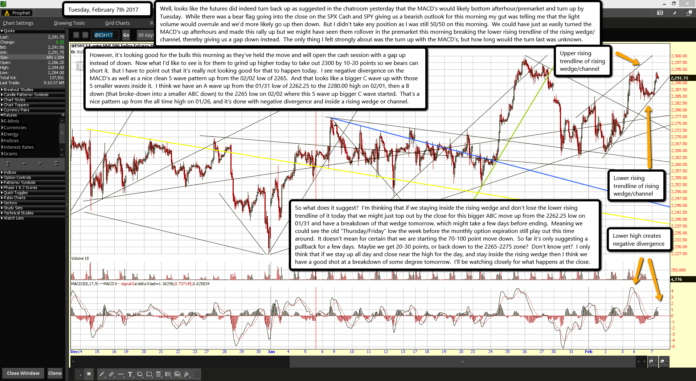 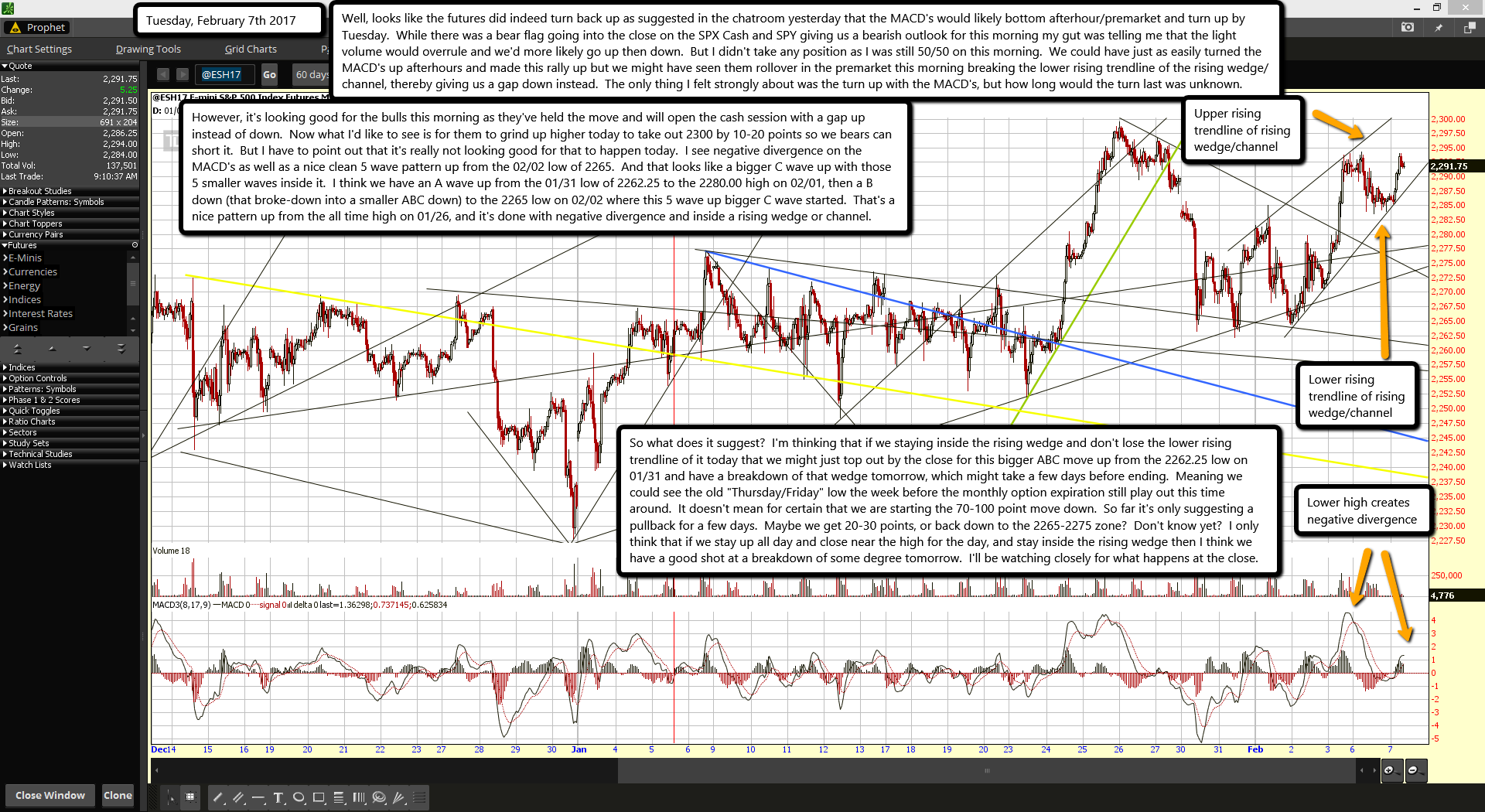 Well, looks like the futures did indeed turn back up as suggested in the chatroom yesterday that the MACD's would likely bottom afterhour/premarket and turn up by Tuesday.  While there was a bear flag going into the close on the SPX Cash and SPY giving us a bearish outlook for this morning my gut was telling me that the light volume would overrule and we'd more likely go up then down.  But I didn't take any position as I was still 50/50 on this morning.  We could have just as easily turned the MACD's up afterhours and made this rally up but we might have seen them rollover in the premarket this morning breaking the lower rising trendline of the rising wedge/channel, thereby giving us a gap down instead.  The only thing I felt strongly about was the turn up with the MACD's, but how long would the turn last was unknown.

However, it's looking good for the bulls this morning as they've held the move and will open the cash session with a gap up instead of down.  Now what I'd like to see is for them to grind up higher today to take out 2300 by 10-20 points so we bears can short it.  But I have to point out that it's really not looking good for that to happen today.  I see negative divergence on the MACD's as well as a nice clean 5 wave pattern up from the 02/02 low of 2265.  And that looks like a bigger C wave up with those 5 smaller waves inside it.  I think we have an A wave up from the 01/31 low of 2262.25 to the 2280.00 high on 02/01, then a B down (that broke-down into a smaller ABC down) to the 2265 low on 02/02 where this 5 wave up bigger C wave started.  That's a nice pattern up from the all time high on 01/26, and it's done with negative divergence and inside a rising wedge or channel.

So what does it suggest?  I'm thinking that if we staying inside the rising wedge and don't lose the lower rising trendline of it today that we might just top out by the close for this bigger ABC move up from the 2262.25 low on 01/31 and have a breakdown of that wedge tomorrow, which might take a few days before ending.  Meaning we could see the old "Thursday/Friday" low the week before the monthly option expiration still play out this time around.  It doesn't mean for certain that we are starting the 70-100 point move down.  So far it's only suggesting a pullback for a few days.  Maybe we get 20-30 points, or back down to the 2265-2275 zone?  Don't know yet?  I only think that if we stay up all day and close near the high for the day, and stay inside the rising wedge then I think we have a good shot at a breakdown of some degree tomorrow.  I'll be watching closely for what happens at the close.