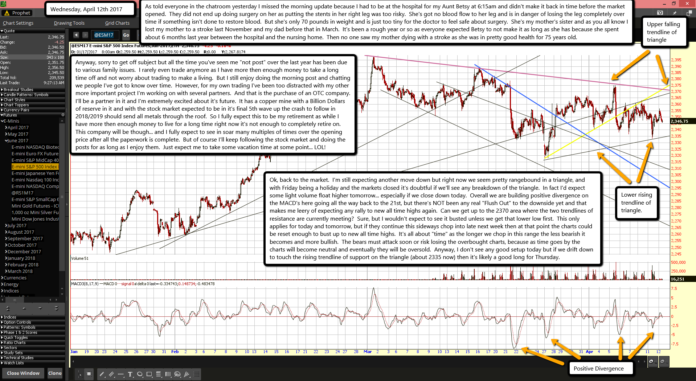 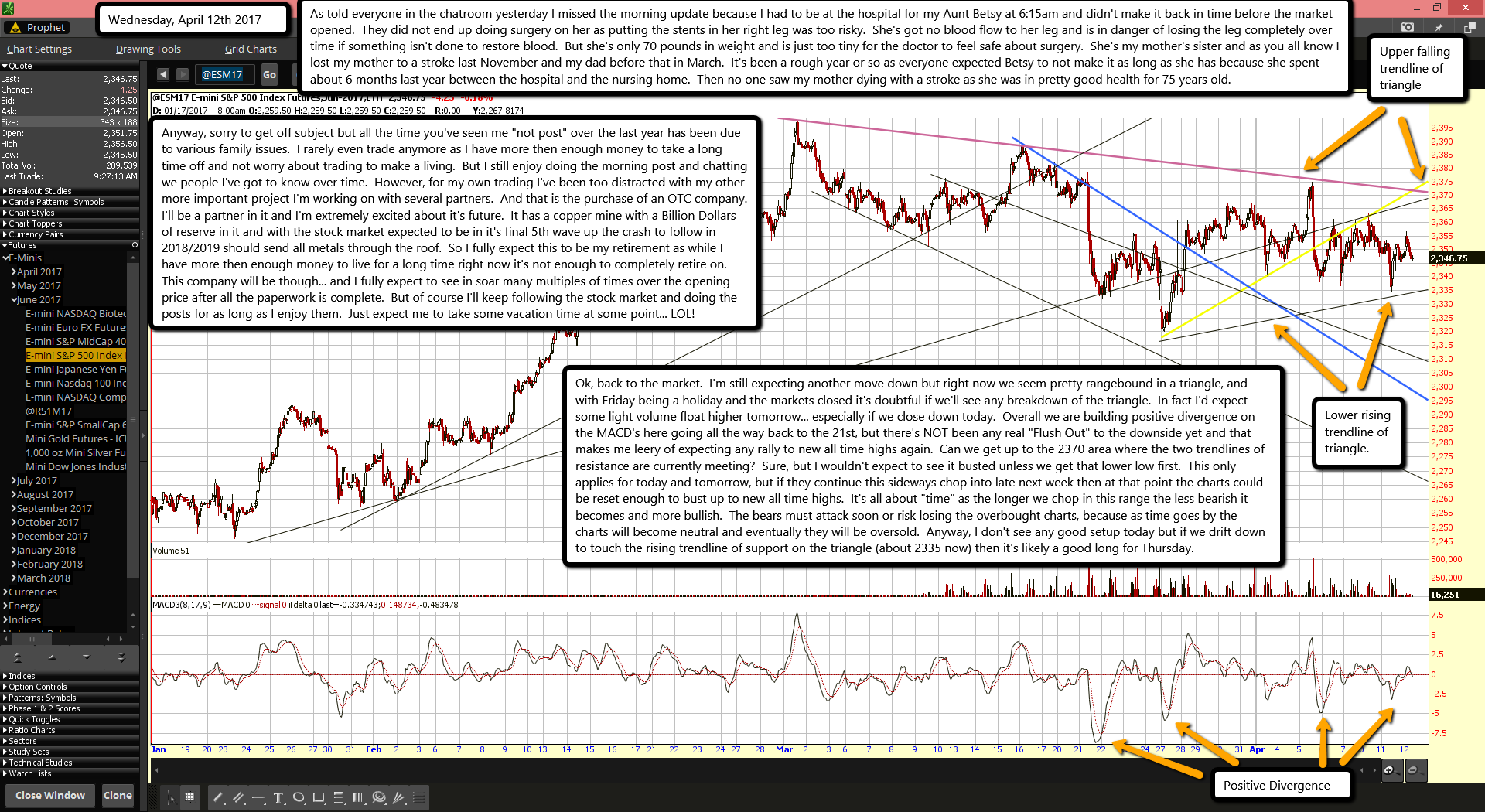 As told everyone in the chatroom yesterday I missed the morning update because I had to be at the hospital for my Aunt Betsy at 6:15am and didn't make it back in time before the market opened.  They did not end up doing surgery on her as putting the stents in her right leg was too risky.  She's got no blood flow to her leg and is in danger of losing the leg completely over time if something isn't done to restore blood.  But she's only 70 pounds in weight and is just too tiny for the doctor to feel safe about surgery.  She's my mother's sister and as you all know I lost my mother to a stroke last November and my dad before that in March.  It's been a rough year or so as everyone expected Betsy to not make it as long as she has because she spent about 6 months last year between the hospital and the nursing home.  Then no one saw my mother dying with a stroke as she was in pretty good health for 75 years old.

Anyway, sorry to get off subject but all the time you've seen me "not post" over the last year has been due to various family issues.  I rarely even trade anymore as I have more then enough money to take a long time off and not worry about trading to make a living.  But I still enjoy doing the morning post and chatting we people I've got to know over time.  However, for my own trading I've been too distracted with my other more important project I'm working on with several partners.  And that is the purchase of an OTC company.  I'll be a partner in it and I'm extremely excited about it's future.  It has a copper mine with a Billion Dollars of reserve in it and with the stock market expected to be in it's final 5th wave up the crash to follow in 2018/2019 should send all metals through the roof.  So I fully expect this to be my retirement as while I have more then enough money to live for a long time right now it's not enough to completely retire on.  This company will be though... and I fully expect to see in soar many multiples of times over the opening price after all the paperwork is complete.  But of course I'll keep following the stock market and doing the posts for as long as I enjoy them.  Just expect me to take some vacation time at some point... LOL!

Ok, back to the market.  I'm still expecting another move down but right now we seem pretty rangebound in a triangle, and with Friday being a holiday and the markets closed it's doubtful if we'll see any breakdown of the triangle.  In fact I'd expect some light volume float higher tomorrow... especially if we close down today.  Overall we are building positive divergence on the MACD's here going all the way back to the 21st, but there's NOT been any real "Flush Out" to the downside yet and that makes me leery of expecting any rally to new all time highs again.  Can we get up to the 2370 area where the two trendlines of resistance are currently meeting?  Sure, but I wouldn't expect to see it busted unless we get that lower low first.  This only applies for today and tomorrow, but if they continue this sideways chop into late next week then at that point the charts could be reset enough to bust up to new all time highs.  It's all about "time" as the longer we chop in this range the less bearish it becomes and more bullish.  The bears must attack soon or risk losing the overbought charts, because as time goes by the charts will become neutral and eventually they will be oversold.  Anyway, I don't see any good setup today but if we drift down to touch the rising trendline of support on the triangle (about 2335 now) then it's likely a good long for Thursday.