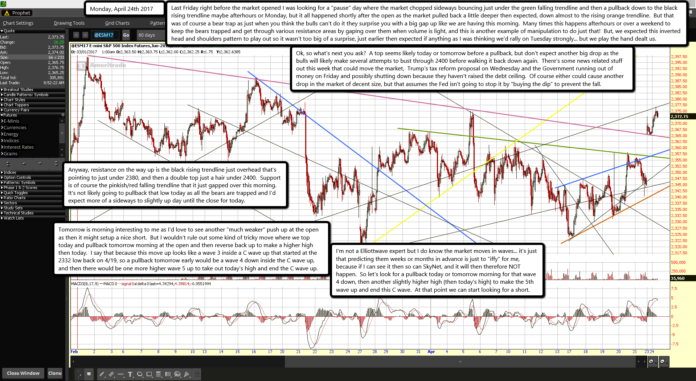 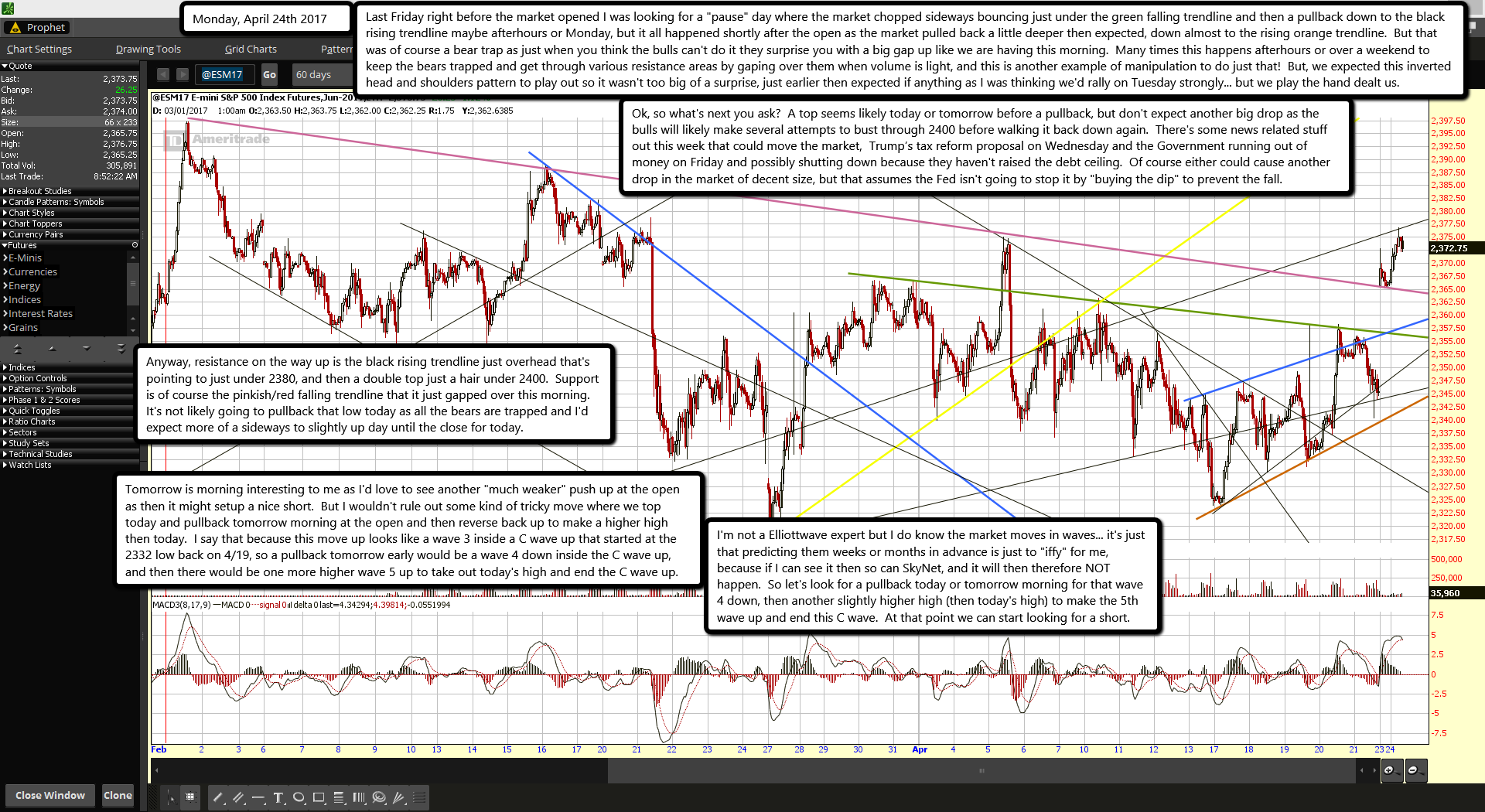 Last Friday right before the market opened I was looking for a "pause" day where the market chopped sideways bouncing just under the green falling trendline and then a pullback down to the black rising trendline maybe afterhours or Monday, but it all happened shortly after the open as the market pulled back a little deeper then expected, down almost to the rising orange trendline.  But that was of course a bear trap as just when you think the bulls can't do it they surprise you with a big gap up like we are having this morning.  Many times this happens afterhours or over a weekend to keep the bears trapped and get through various resistance areas by gaping over them when volume is light, and this is another example of manipulation to do just that!  But, we expected this inverted head and shoulders pattern to play out so it wasn't too big of a surprise, just earlier then expected if anything as I was thinking we'd rally on Tuesday strongly... but we play the hand dealt us.

Ok, so what's next you ask?  A top seems likely today or tomorrow before a pullback, but don't expect another big drop as the bulls will likely make several attempts to bust through 2400 before walking it back down again.  There's some news related stuff out this week that could move the market,  Trump’s tax reform proposal on Wednesday and the Government running out of money on Friday and possibly shutting down because they haven't raised the debt ceiling.  Of course either could cause another drop in the market of decent size, but that assumes the Fed isn't going to stop it by "buying the dip" to prevent the fall.

Anyway, resistance on the way up is the black rising trendline just overhead that's pointing to just under 2380, and then a double top just a hair under 2400.  Support is of course the pinkish/red falling trendline that it just gapped over this morning.  It's not likely going to pullback that low today as all the bears are trapped and I'd expect more of a sideways to slightly up day until the close for today.

Tomorrow is morning interesting to me as I'd love to see another "much weaker" push up at the open as then it might setup a nice short.  But I wouldn't rule out some kind of tricky move where we top today and pullback tomorrow morning at the open and then reverse back up to make a higher high then today.  I say that because this move up looks like a wave 3 inside a C wave up that started at the 2332 low back on 4/19, so a pullback tomorrow early would be a wave 4 down inside the C wave up, and then there would be one more higher wave 5 up to take out today's high and end the C wave up.

I'm not a Elliottwave expert but I do know the market moves in waves... it's just that predicting them weeks or months in advance is just to "iffy" for me, because if I can see it then so can SkyNet, and it will then therefore NOT happen.  So let's look for a pullback today or tomorrow morning for that wave 4 down, then another slightly higher high (then today's high) to make the 5th wave up and end this C wave.  At that point we can start looking for a short.