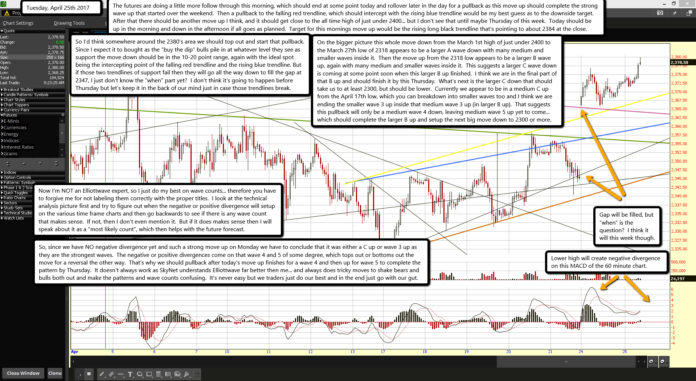 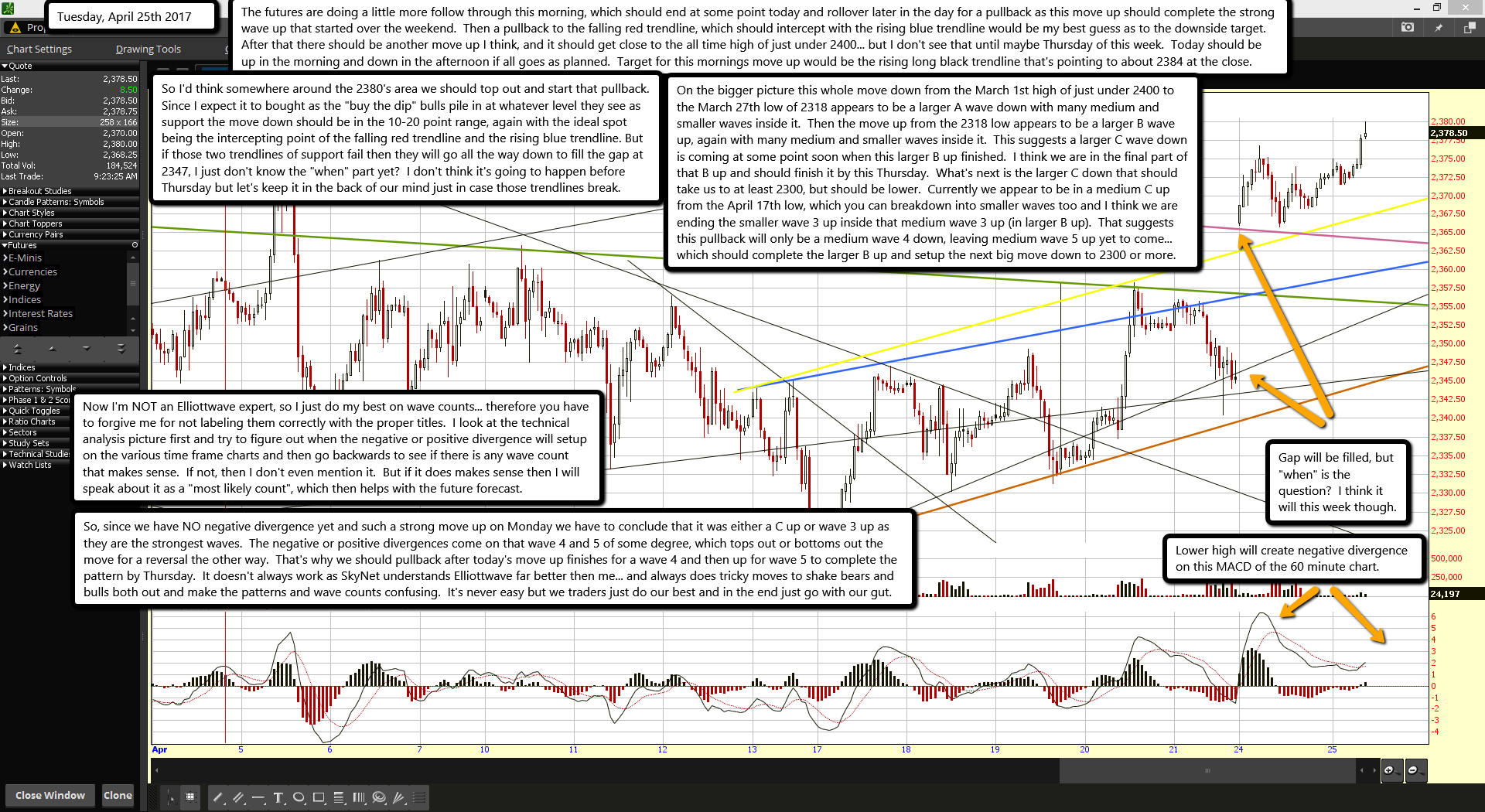 The futures are doing a little more follow through this morning, which should end at some point today and rollover later in the day for a pullback as this move up should complete the strong wave up that started over the weekend.  Then a pullback to the falling red trendline, which should intercept with the rising blue trendline would be my best guess as to the downside target.  After that there should be another move up I think, and it should get close to the all time high of just under 2400... but I don't see that until maybe Thursday of this week.  Today should be up in the morning and down in the afternoon if all goes as planned.  Target for this mornings move up would be the rising long black trendline that's pointing to about 2384 at the close.

So I'd think somewhere around the 2380's area we should top out and start that pullback.  Since I expect it to bought as the "buy the dip" bulls pile in at whatever level they see as support the move down should be in the 10-20 point range, again with the ideal spot being the intercepting point of the falling red trendline and the rising blue trendline. But if those two trendlines of support fail then they will go all the way down to fill the gap at 2347, I just don't know the "when" part yet?  I don't think it's going to happen before Thursday but let's keep it in the back of our mind just in case those trendlines break.

On the bigger picture this whole move down from the March 1st high of just under 2400 to the March 27th low of 2318 appears to be a larger A wave down with many medium and smaller waves inside it.  Then the move up from the 2318 low appears to be a larger B wave up, again with many medium and smaller waves inside it.  This suggests a larger C wave down is coming at some point soon when this larger B up finished.  I think we are in the final part of that B up and should finish it by this Thursday.  What's next is the larger C down that should take us to at least 2300, but should be lower.  Currently we appear to be in a medium C up from the April 17th low, which you can breakdown into smaller waves too and I think we are ending the smaller wave 3 up inside that medium wave 3 up (in larger B up).  That suggests this pullback will only be a medium wave 4 down, leaving medium wave 5 up yet to come... which should complete the larger B up and setup the next big move down to 2300 or more.

Now I'm NOT an Elliottwave expert, so I just do my best on wave counts... therefore you have to forgive me for not labeling them correctly with the proper titles.  I look at the technical analysis picture first and try to figure out when the negative or positive divergence will setup on the various time frame charts and then go backwards to see if there is any wave count that makes sense.  If not, then I don't even mention it.  But if it does makes sense then I will speak about it as a "most likely count", which then helps with the future forecast.

So, since we have NO negative divergence yet and such a strong move up on Monday we have to conclude that it was either a C up or wave 3 up as they are the strongest waves.  The negative or positive divergences come on that wave 4 and 5 of some degree, which tops out or bottoms out the move for a reversal the other way.  That's why we should pullback after today's move up finishes for a wave 4 and then up for wave 5 to complete the pattern by Thursday.  It doesn't always work as SkyNet understands Elliottwave far better then me... and always does tricky moves to shake bears and bulls both out and make the patterns and wave counts confusing.  It's never easy but we traders just do our best and in the end just go with our gut.