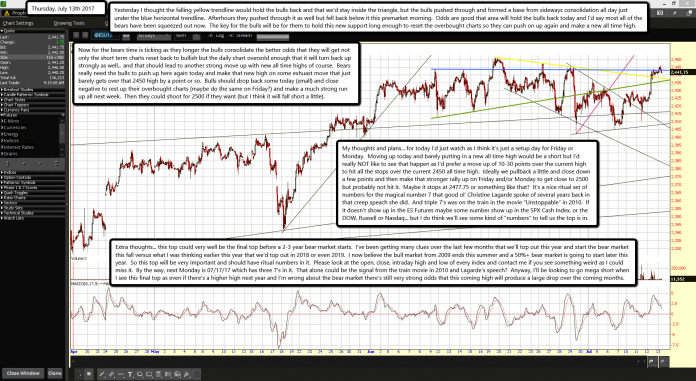 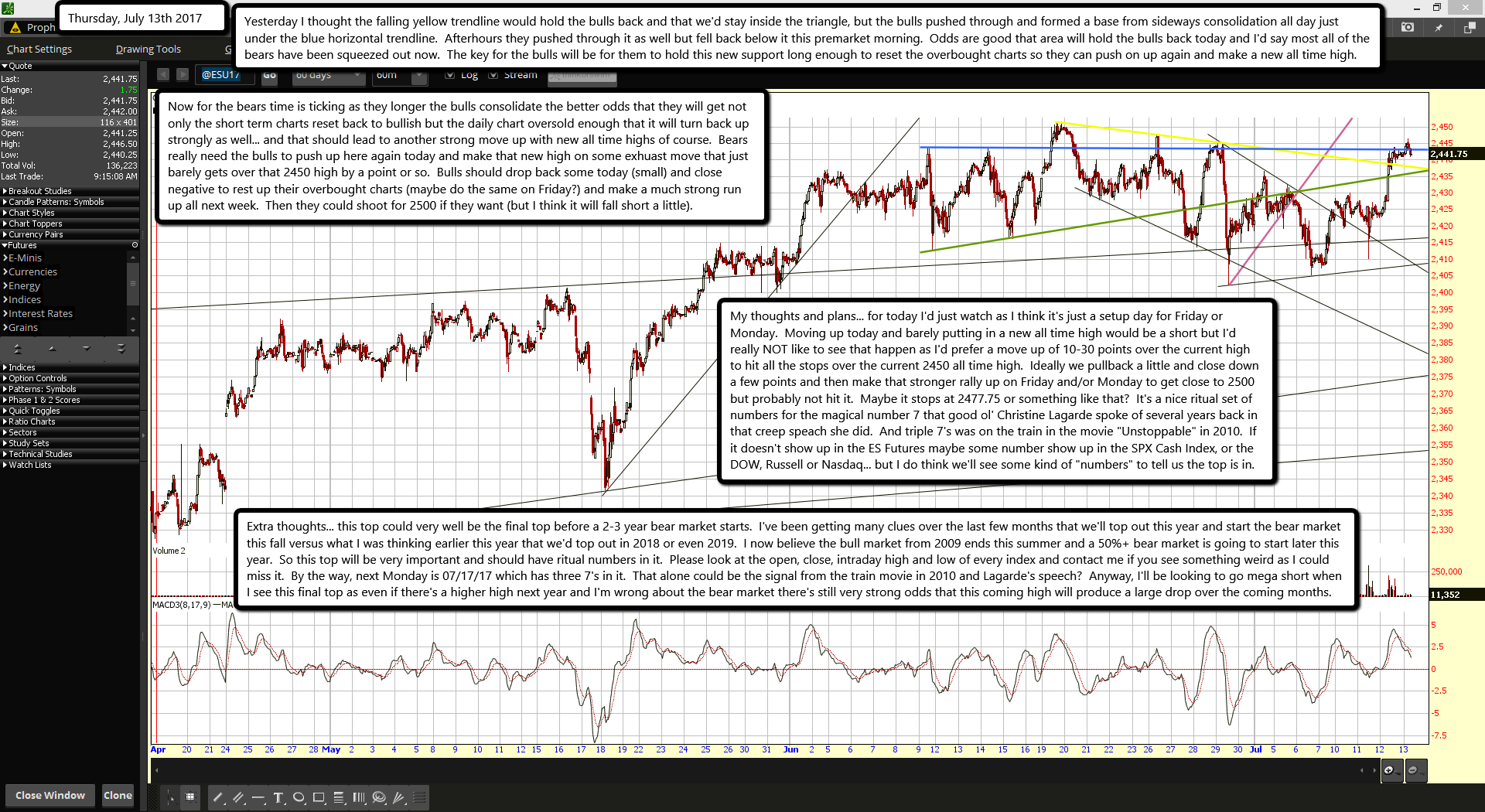 Yesterday I thought the falling yellow trendline would hold the bulls back and that we'd stay inside the triangle, but the bulls pushed through and formed a base from sideways consolidation all day just under the blue horizontal trendline.  Afterhours they pushed through it as well but fell back below it this premarket morning.  Odds are good that area will hold the bulls back today and I'd say most all of the bears have been squeezed out now.  The key for the bulls will be for them to hold this new support long enough to reset the overbought charts so they can push on up again and make a new all time high.

Now for the bears time is ticking as they longer the bulls consolidate the better odds that they will get not only the short term charts reset back to bullish but the daily chart oversold enough that it will turn back up strongly as well... and that should lead to another strong move up with new all time highs of course.  Bears really need the bulls to push up here again today and make that new high on some exhuast move that just barely gets over that 2450 high by a point or so.  Bulls should drop back some today (small) and close negative to rest up their overbought charts (maybe do the same on Friday?) and make a much strong run up all next week.  Then they could shoot for 2500 if they want (but I think it will fall short a little).

My thoughts and plans... for today I'd just watch as I think it's just a setup day for Friday or Monday.  Moving up today and barely putting in a new all time high would be a short but I'd really NOT like to see that happen as I'd prefer a move up of 10-30 points over the current high to hit all the stops over the current 2450 all time high.  Ideally we pullback a little and close down a few points and then make that stronger rally up on Friday and/or Monday to get close to 2500 but probably not hit it.  Maybe it stops at 2477.75 or something like that?  It's a nice ritual set of numbers for the magical number 7 that good ol' Christine Lagarde spoke of several years back in that creep speach she did.  And triple 7's was on the train in the movie "Unstoppable" in 2010.  If it doesn't show up in the ES Futures maybe some number show up in the SPX Cash Index, or the DOW, Russell or Nasdaq... but I do think we'll see some kind of "numbers" to tell us the top is in.

Extra thoughts... this top could very well be the final top before a 2-3 year bear market starts.  I've been getting many clues over the last few months that we'll top out this year and start the bear market this fall versus what I was thinking earlier this year that we'd top out in 2018 or even 2019.  I now believe the bull market from 2009 ends this summer and a 50%+ bear market is going to start later this year.  So this top will be very important and should have ritual numbers in it.  Please look at the open, close, intraday high and low of every index and contact me if you see something weird as I could miss it.  By the way, next Monday is 07/17/17 which has three 7's in it.  That alone could be the signal from the train movie in 2010 and Lagarde's speech?  Anyway, I'll be looking to go mega short when I see this final top as even if there's a higher high next year and I'm wrong about the bear market there's still very strong odds that this coming high will produce a large drop over the coming months.