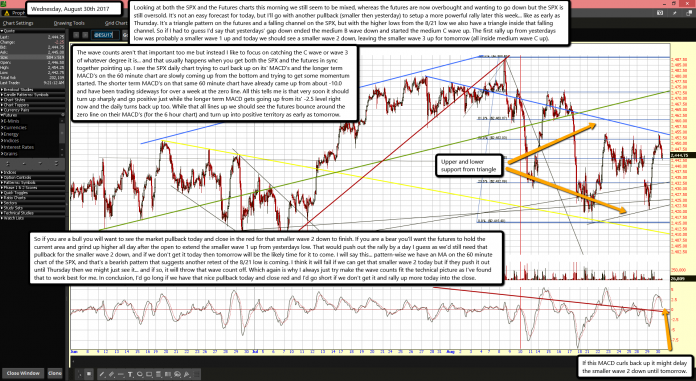 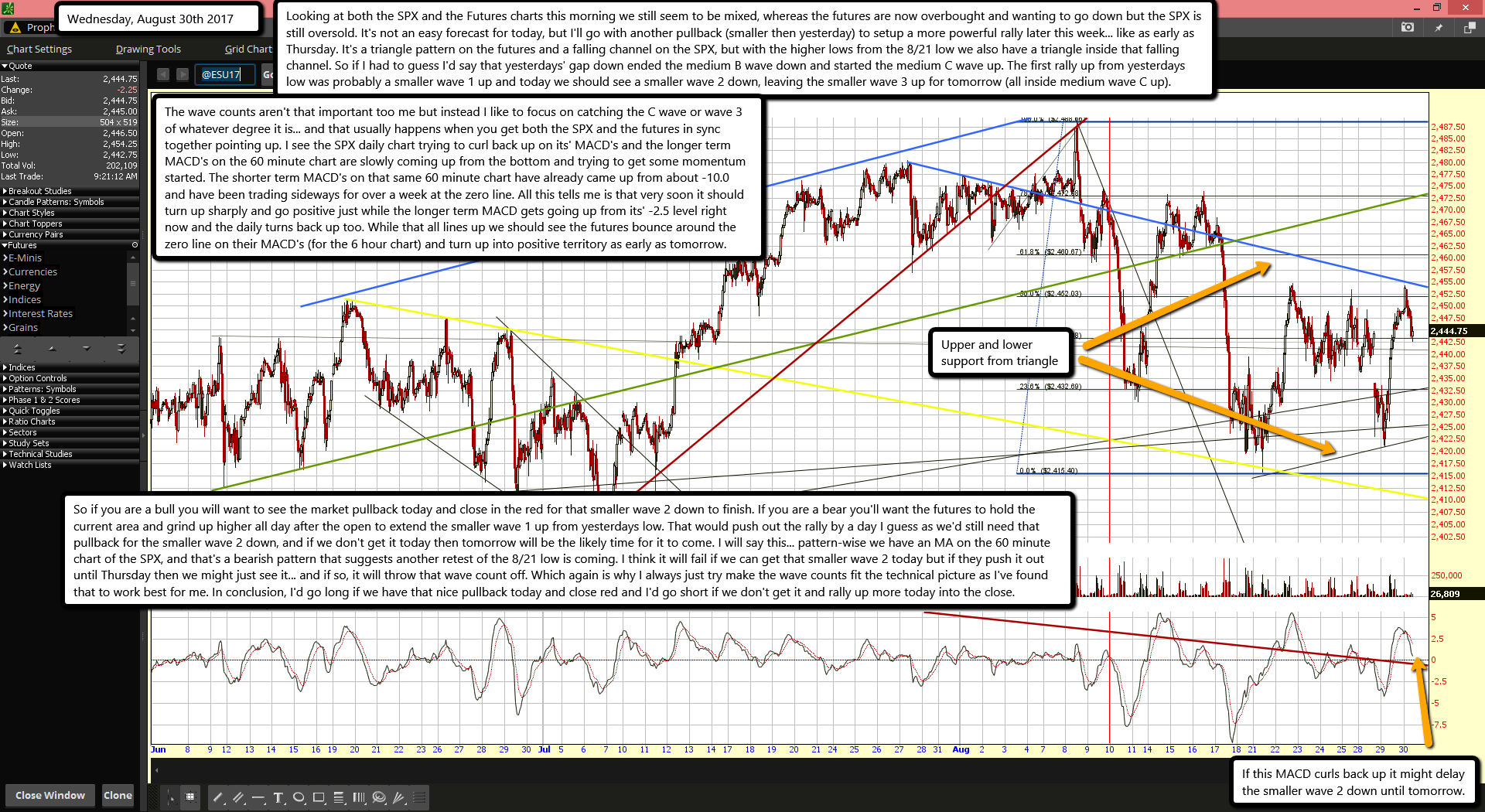 Looking at both the SPX and the Futures charts this morning we still seem to be mixed, whereas the futures are now overbought and wanting to go down but the SPX is still oversold. It's not an easy forecast for today, but I'll go with another pullback (smaller then yesterday) to setup a more powerful rally later this week... like as early as Thursday. It's a triangle pattern on the futures and a falling channel on the SPX, but with the higher lows from the 8/21 low we also have a triangle inside that falling channel. So if I had to guess I'd say that yesterdays' gap down ended the medium B wave down and started the medium C wave up. The first rally up from yesterdays low was probably a smaller wave 1 up and today we should see a smaller wave 2 down, leaving the smaller wave 3 up for tomorrow (all inside medium wave C up).

The wave counts aren't that important too me but instead I like to focus on catching the C wave or wave 3 of whatever degree it is... and that usually happens when you get both the SPX and the futures in sync together pointing up. I see the SPX daily chart trying to curl back up on its' MACD's and the longer term MACD's on the 60 minute chart are slowly coming up from the bottom and trying to get some momentum started. The shorter term MACD's on that same 60 minute chart have already came up from about -10.0 and have been trading sideways for over a week at the zero line. All this tells me is that very soon it should turn up sharply and go positive just while the longer term MACD gets going up from its' -2.5 level right now and the daily turns back up too. While that all lines up we should see the futures bounce around the zero line on their MACD's (for the 6 hour chart) and turn up into positive territory as early as tomorrow.

So if you are a bull you will want to see the market pullback today and close in the red for that smaller wave 2 down to finish. If you are a bear you'll want the futures to hold the current area and grind up higher all day after the open to extend the smaller wave 1 up from yesterdays low. That would push out the rally by a day I guess as we'd still need that pullback for the smaller wave 2 down, and if we don't get it today then tomorrow will be the likely time for it to come. I will say this... pattern-wise we have an MA on the 60 minute chart of the SPX, and that's a bearish pattern that suggests another retest of the 8/21 low is coming. I think it will fail if we can get that smaller wave 2 today but if they push it out until Thursday then we might just see it... and if so, it will throw that wave count off. Which again is why I always just try make the wave counts fit the technical picture as I've found that to work best for me. In conclusion, I'd go long if we have that nice pullback today and close red and I'd go short if we don't get it and rally up more today into the close.