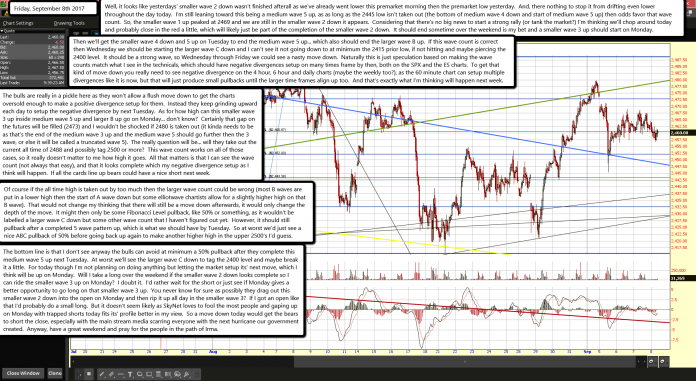 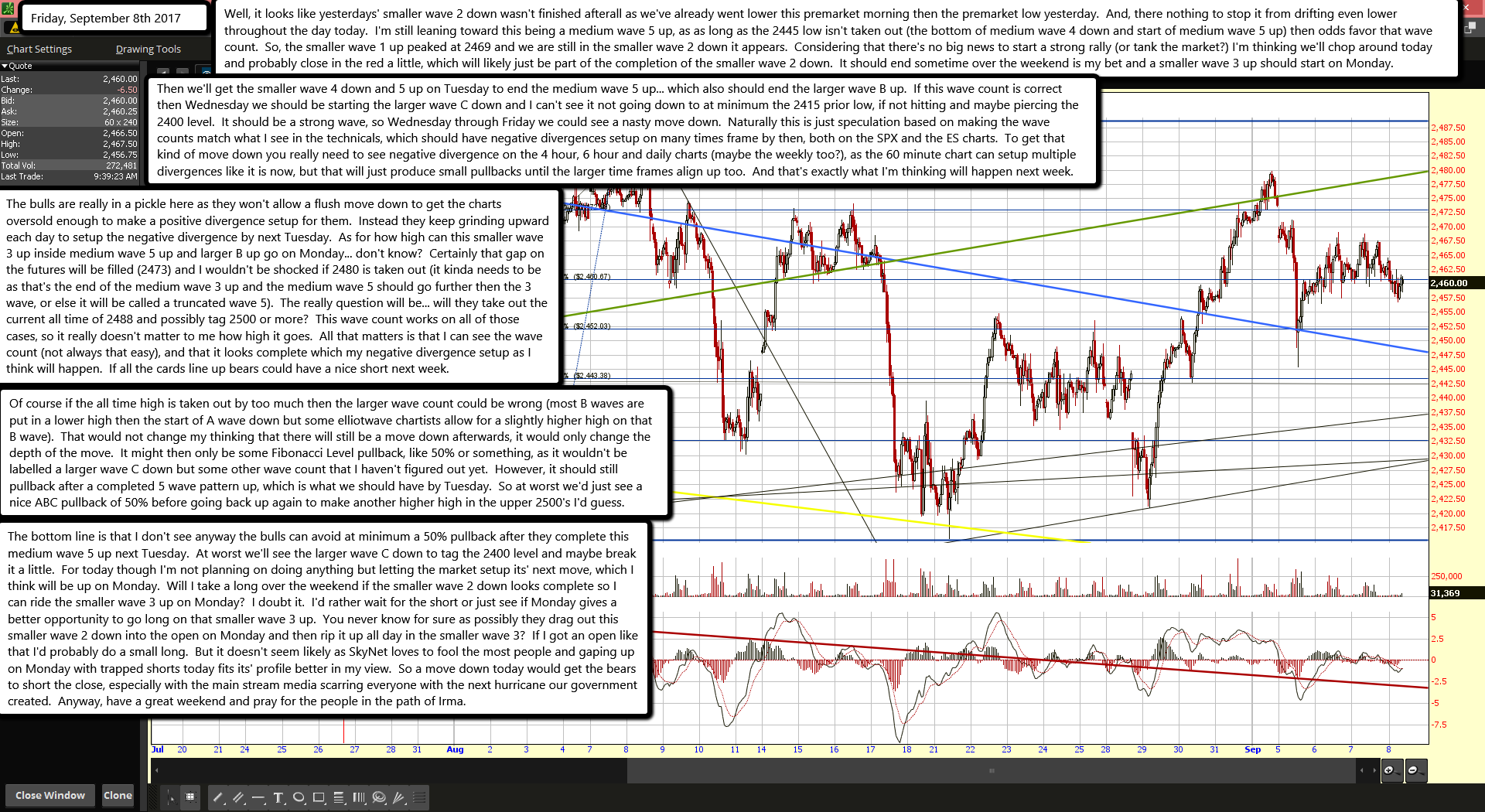 Well, it looks like yesterdays' smaller wave 2 down wasn't finished afterall as we've already went lower this premarket morning then the premarket low yesterday.  And, there nothing to stop it from drifting even lower throughout the day today.  I'm still leaning toward this being a medium wave 5 up, as as long as the 2445 low isn't taken out (the bottom of medium wave 4 down and start of medium wave 5 up) then odds favor that wave count.  So, the smaller wave 1 up peaked at 2469 and we are still in the smaller wave 2 down it appears.  Considering that there's no big news to start a strong rally (or tank the market?) I'm thinking we'll chop around today and probably close in the red a little, which will likely just be part of the completion of the smaller wave 2 down.  It should end sometime over the weekend is my bet and a smaller wave 3 up should start on Monday.

Then we'll get the smaller wave 4 down and 5 up on Tuesday to end the medium wave 5 up... which also should end the larger wave B up.  If this wave count is correct then Wednesday we should be starting the larger wave C down and I can't see it not going down to at minimum the 2415 prior low, if not hitting and maybe piercing the 2400 level.  It should be a strong wave, so Wednesday through Friday we could see a nasty move down.  Naturally this is just speculation based on making the wave counts match what I see in the technicals, which should have negative divergences setup on many times frame by then, both on the SPX and the ES charts.  To get that kind of move down you really need to see negative divergence on the 4 hour, 6 hour and daily charts (maybe the weekly too?), as the 60 minute chart can setup multiple divergences like it is now, but that will just produce small pullbacks until the larger time frames align up too.  And that's exactly what I'm thinking will happen next week.

The bulls are really in a pickle here as they won't allow a flush move down to get the charts oversold enough to make a positive divergence setup for them.  Instead they keep grinding upward each day to setup the negative divergence by next Tuesday.  As for how high can this smaller wave 3 up inside medium wave 5 up and larger B up go on Monday... don't know?  Certainly that gap on the futures will be filled (2473) and I wouldn't be shocked if 2480 is taken out (it kinda needs to be as that's the end of the medium wave 3 up and the medium wave 5 should go further then the 3 wave, or else it will be called a truncated wave 5).  The really question will be... will they take out the current all time of 2488 and possibly tag 2500 or more?  This wave count works on all of those cases, so it really doesn't matter to me how high it goes.  All that matters is that I can see the wave count (not always that easy), and that it looks complete which my negative divergence setup as I think will happen.  If all the cards line up bears could have a nice short next week.

Of course if the all time high is taken out by too much then the larger wave count could be wrong (most B waves are put in a lower high then the start of A wave down but some elliotwave chartists allow for a slightly higher high on that B wave).  That would not change my thinking that there will still be a move down afterwards, it would only change the depth of the move.  It might then only be some Fibonacci Level pullback, like 50% or something, as it wouldn't be labelled a larger wave C down but some other wave count that I haven't figured out yet.  However, it should still pullback after a completed 5 wave pattern up, which is what we should have by Tuesday.  So at worst we'd just see a nice ABC pullback of 50% before going back up again to make another higher high in the upper 2500's I'd guess.

The bottom line is that I don't see anyway the bulls can avoid at minimum a 50% pullback after they complete this medium wave 5 up next Tuesday.  At worst we'll see the larger wave C down to tag the 2400 level and maybe break it a little.  For today though I'm not planning on doing anything but letting the market setup its' next move, which I think will be up on Monday.  Will I take a long over the weekend if the smaller wave 2 down looks complete so I can ride the smaller wave 3 up on Monday?  I doubt it.  I'd rather wait for the short or just see if Monday gives a better opportunity to go long on that smaller wave 3 up.  You never know for sure as possibly they drag out this smaller wave 2 down into the open on Monday and then rip it up all day in the smaller wave 3?  If I got an open like that I'd probably do a small long.  But it doesn't seem likely as SkyNet loves to fool the most people and gaping up on Monday with trapped shorts today fits its' profile better in my view.  So a move down today would get the bears to short the close, especially with the main stream media scarring everyone with the next hurricane our government created.  Anyway, have a great weekend and pray for the people in the path of Irma.