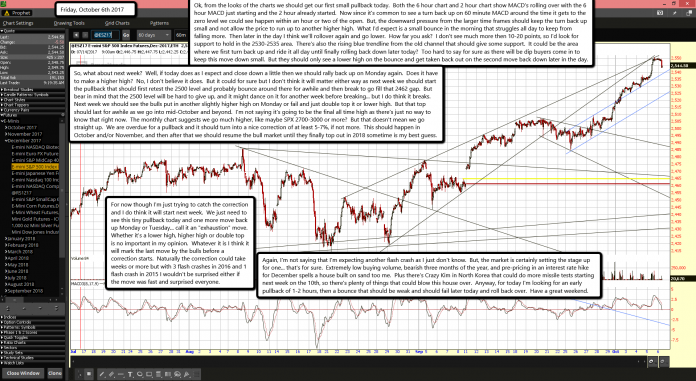 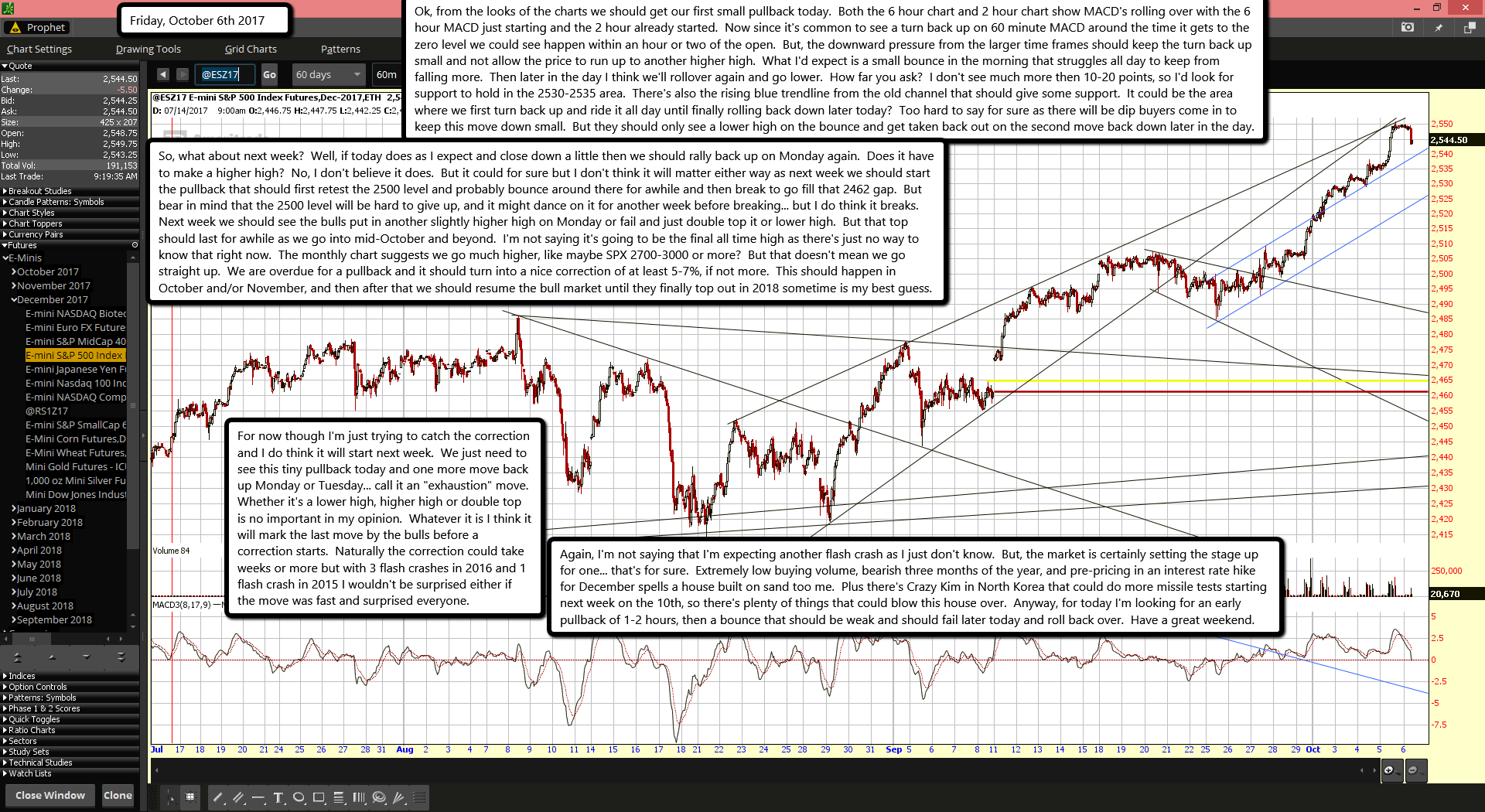 Ok, from the looks of the charts we should get our first small pullback today.  Both the 6 hour chart and 2 hour chart show MACD's rolling over with the 6 hour MACD just starting and the 2 hour already started.  Now since it's common to see a turn back up on 60 minute MACD around the time it gets to the zero level we could see happen within an hour or two of the open.  But, the downward pressure from the larger time frames should keep the turn back up small and not allow the price to run up to another higher high.  What I'd expect is a small bounce in the morning that struggles all day to keep from falling more.  Then later in the day I think we'll rollover again and go lower.  How far you ask?  I don't see much more then 10-20 points, so I'd look for support to hold in the 2530-2535 area.  There's also the rising blue trendline from the old channel that should give some support.  It could be the area where we first turn back up and ride it all day until finally rolling back down later today?  Too hard to say for sure as there will be dip buyers come in to keep this move down small.  But they should only see a lower high on the bounce and get taken back out on the second move back down later in the day.

So, what about next week?  Well, if today does as I expect and close down a little then we should rally back up on Monday again.  Does it have to make a higher high?  No, I don't believe it does.  But it could for sure but I don't think it will matter either way as next week we should start the pullback that should first retest the 2500 level and probably bounce around there for awhile and then break to go fill that 2462 gap.  But bear in mind that the 2500 level will be hard to give up, and it might dance on it for another week before breaking... but I do think it breaks.  Next week we should see the bulls put in another slightly higher high on Monday or fail and just double top it or lower high.  But that top should last for awhile as we go into mid-October and beyond.  I'm not saying it's going to be the final all time high as there's just no way to know that right now.  The monthly chart suggests we go much higher, like maybe SPX 2700-3000 or more?  But that doesn't mean we go straight up.  We are overdue for a pullback and it should turn into a nice correction of at least 5-7%, if not more.  This should happen in October and/or November, and then after that we should resume the bull market until they finally top out in 2018 sometime is my best guess.

For now though I'm just trying to catch the correction and I do think it will start next week.  We just need to see this tiny pullback today and one more move back up Monday or Tuesday... call it an "exhaustion" move.  Whether it's a lower high, higher high or double top is no important in my opinion.  Whatever it is I think it will mark the last move by the bulls before a correction starts.  Naturally the correction could take weeks or more but with 3 flash crashes in 2016 and 1 flash crash in 2015 I wouldn't be surprised either if the move was fast and surprised everyone.

Again, I'm not saying that I'm expecting another flash crash as I just don't know.  But, the market is certainly setting the stage up for one... that's for sure.  Extremely low buying volume, bearish three months of the year, and pre-pricing in an interest rate hike for December spells a house built on sand too me.  Plus there's Crazy Kim in North Korea that could do more missile tests starting next week on the 10th, so there's plenty of things that could blow this house over.  Anyway, for today I'm looking for an early pullback of 1-2 hours, then a bounce that should be weak and should fail later today and roll back over.  Have a great weekend.