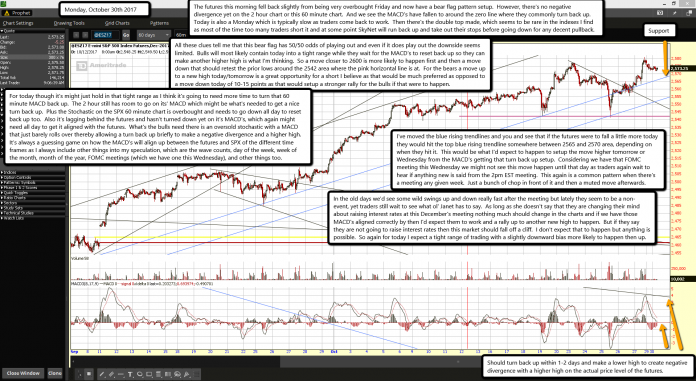 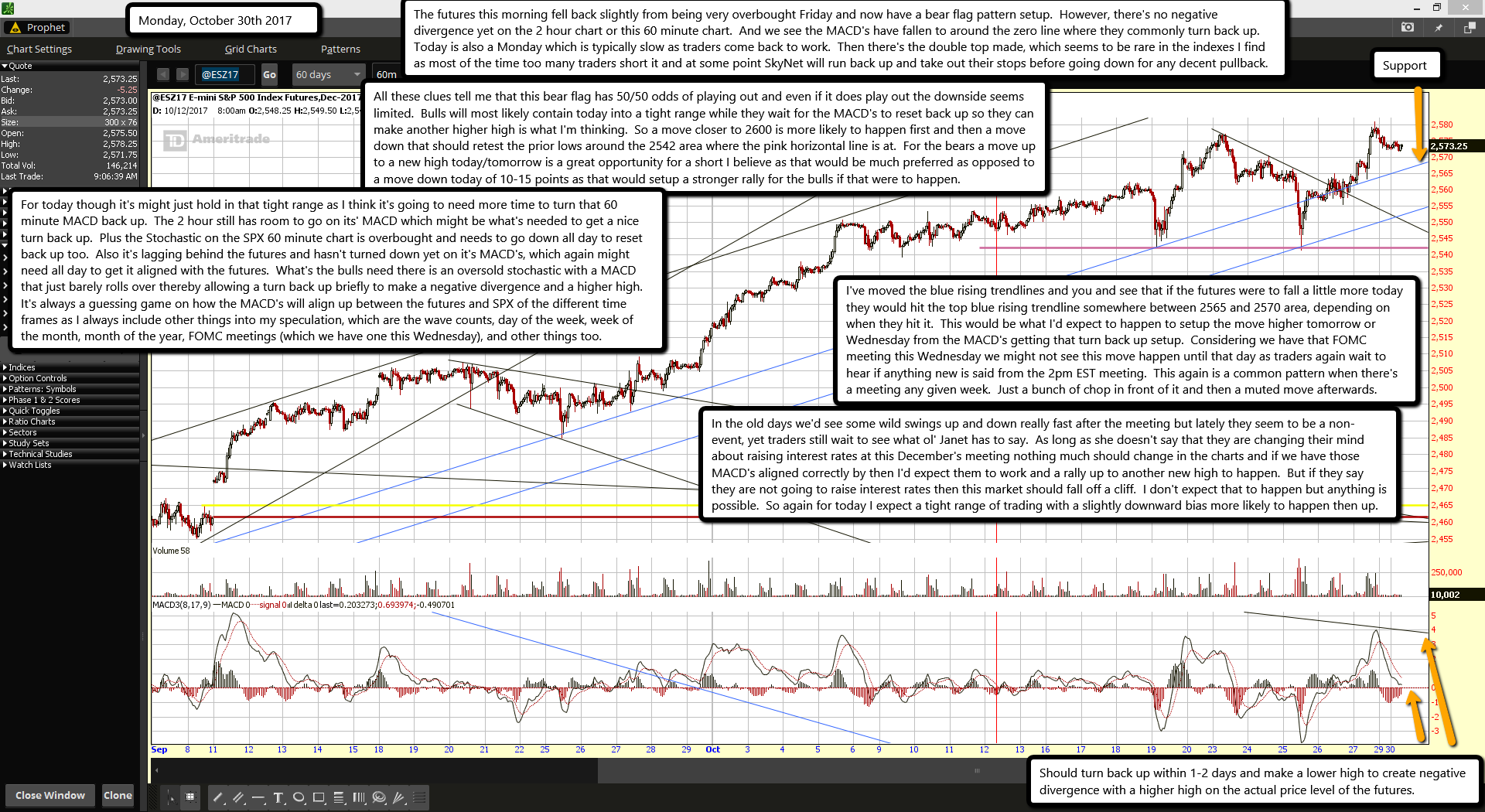 The futures this morning fell back slightly from being very overbought Friday and now have a bear flag pattern setup.  However, there's no negative divergence yet on the 2 hour chart or this 60 minute chart.  And we see the MACD's have fallen to around the zero line where they commonly turn back up.  Today is also a Monday which is typically slow as traders come back to work.  Then there's the double top made, which seems to be rare in the indexes I find as most of the time too many traders short it and at some point SkyNet will run back up and take out their stops before going down for any decent pullback.

All these clues tell me that this bear flag has 50/50 odds of playing out and even if it does play out the downside seems limited.  Bulls will most likely contain today into a tight range while they wait for the MACD's to reset back up so they can make another higher high is what I'm thinking.  So a move closer to 2600 is more likely to happen first and then a move down that should retest the prior lows around the 2542 area where the pink horizontal line is at.  For the bears a move up to a new high today/tomorrow is a great opportunity for a short I believe as that would be much preferred as opposed to a move down today of 10-15 points as that would setup a stronger rally for the bulls if that were to happen.

For today though it's might just hold in that tight range as I think it's going to need more time to turn that 60 minute MACD back up.  The 2 hour still has room to go on its' MACD which might be what's needed to get a nice turn back up.  Plus the Stochastic on the SPX 60 minute chart is overbought and needs to go down all day to reset back up too.  Also it's lagging behind the futures and hasn't turned down yet on it's MACD's, which again might need all day to get it aligned with the futures.  What's the bulls need there is an oversold stochastic with a MACD that just barely rolls over thereby allowing a turn back up briefly to make a negative divergence and a higher high.  It's always a guessing game on how the MACD's will align up between the futures and SPX of the different time frames as I always include other things into my speculation, which are the wave counts, day of the week, week of the month, month of the year, FOMC meetings (which we have one this Wednesday), and other things too.

I've moved the blue rising trendlines and you and see that if the futures were to fall a little more today they would hit the top blue rising trendline somewhere between 2565 and 2570 area, depending on when they hit it.  This would be what I'd expect to happen to setup the move higher tomorrow or Wednesday from the MACD's getting that turn back up setup.  Considering we have that FOMC meeting this Wednesday we might not see this move happen until that day as traders again wait to hear if anything new is said from the 2pm EST meeting.  This again is a common pattern when there's a meeting any given week.  Just a bunch of chop in front of it and then a muted move afterwards.

In the old days we'd see some wild swings up and down really fast after the meeting but lately they seem to be a non-event, yet traders still wait to see what ol' Janet has to say.  As long as she doesn't say that they are changing their mind about raising interest rates at this December's meeting nothing much should change in the charts and if we have those MACD's aligned correctly by then I'd expect them to work and a rally up to another new high to happen.  But if they say they are not going to raise interest rates then this market should fall off a cliff.  I don't expect that to happen but anything is possible.  So again for today I expect a tight range of trading with a slightly downward bias more likely to happen then up.