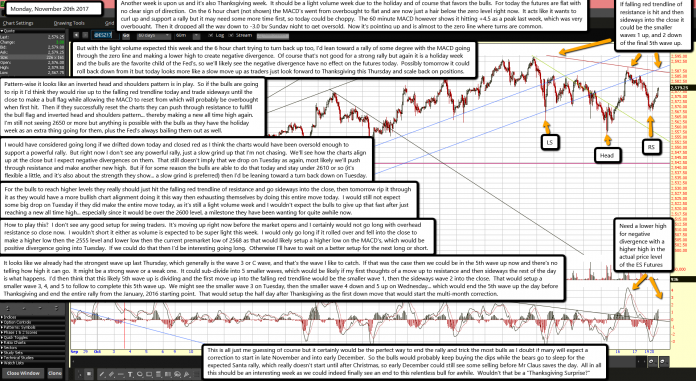 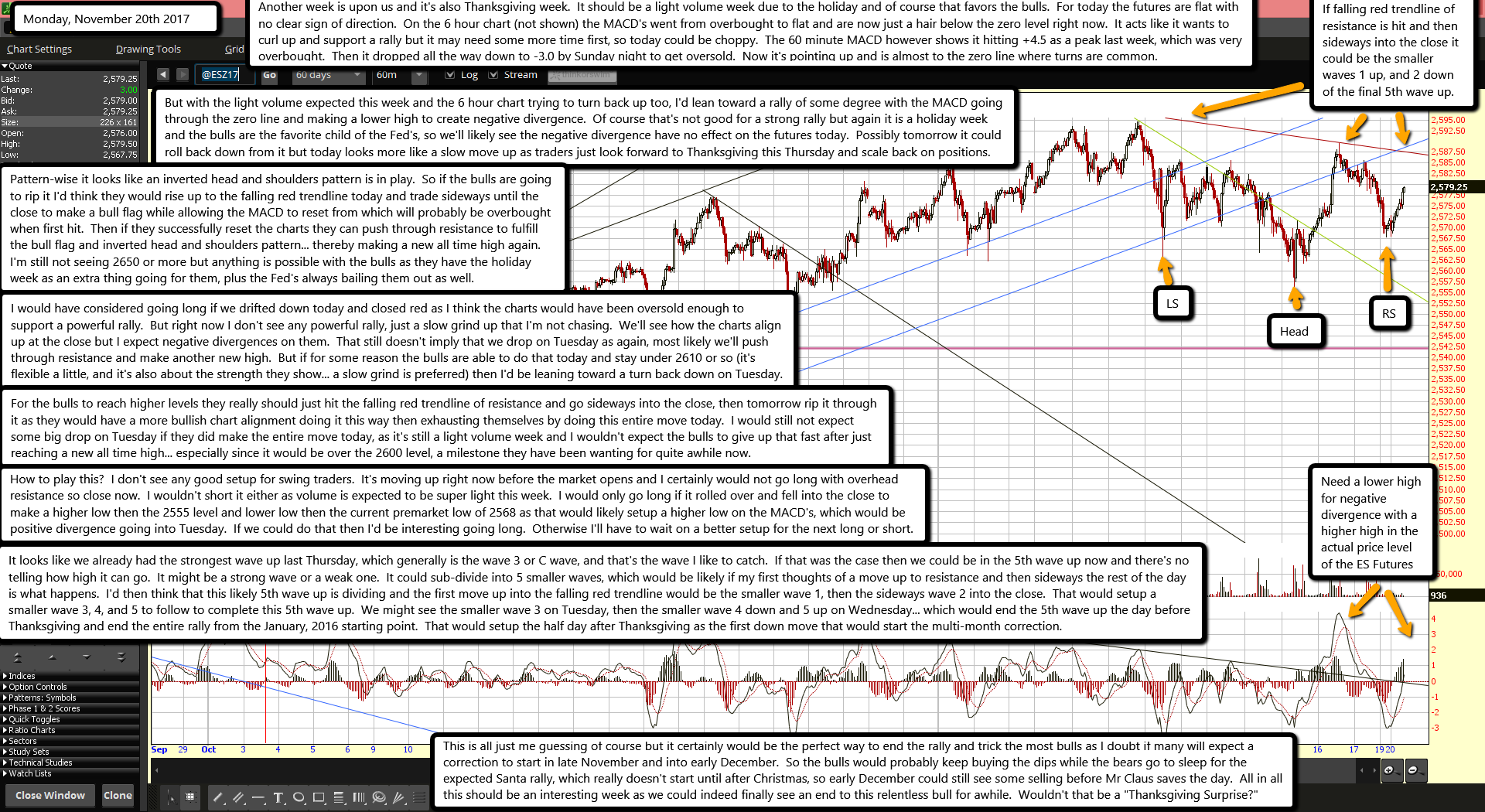 Another week is upon us and it's also Thanksgiving week.  It should be a light volume week due to the holiday and of course that favors the bulls.  For today the futures are flat with no clear sign of direction.  On the 6 hour chart (not shown) the MACD's went from overbought to flat and are now just a hair below the zero level right now.  It acts like it wants to curl up and support a rally but it may need some more time first, so today could be choppy.  The 60 minute MACD however shows it hitting +4.5 as a peak last week, which was very overbought.  Then it dropped all the way down to -3.0 by Sunday night to get oversold.  Now it's pointing up and is almost to the zero line where turns are common.

But with the light volume expected this week and the 6 hour chart trying to turn back up too, I'd lean toward a rally of some degree with the MACD going through the zero line and making a lower high to create negative divergence.  Of course that's not good for a strong rally but again it is a holiday week and the bulls are the favorite child of the Fed's, so we'll likely see the negative divergence have no effect on the futures today.  Possibly tomorrow it could roll back down from it but today looks more like a slow move up as traders just look forward to Thanksgiving this Thursday and scale back on positions.

Pattern-wise it looks like an inverted head and shoulders pattern is in play.  So if the bulls are going to rip it I'd think they would rise up to the falling red trendline today and trade sideways until the close to make a bull flag while allowing the MACD to reset from which will probably be overbought when first hit.  Then if they successfully reset the charts they can push through resistance to fulfill the bull flag and inverted head and shoulders pattern... thereby making a new all time high again.  I'm still not seeing 2650 or more but anything is possible with the bulls as they have the holiday week as an extra thing going for them, plus the Fed's always bailing them out as well.

I would have considered going long if we drifted down today and closed red as I think the charts would have been oversold enough to support a powerful rally.  But right now I don't see any powerful rally, just a slow grind up that I'm not chasing.  We'll see how the charts align up at the close but I expect negative divergences on them.  That still doesn't imply that we drop on Tuesday as again, most likely we'll push through resistance and make another new high.  But if for some reason the bulls are able to do that today and stay under 2610 or so (it's flexible a little, and it's also about the strength they show... a slow grind is preferred) then I'd be leaning toward a turn back down on Tuesday.

For the bulls to reach higher levels they really should just hit the falling red trendline of resistance and go sideways into the close, then tomorrow rip it through it as they would have a more bullish chart alignment doing it this way then exhausting themselves by doing this entire move today.  I would still not expect some big drop on Tuesday if they did make the entire move today, as it's still a light volume week and I wouldn't expect the bulls to give up that fast after just reaching a new all time high... especially since it would be over the 2600 level, a milestone they have been wanting for quite awhile now.

How to play this?  I don't see any good setup for swing traders.  It's moving up right now before the market opens and I certainly would not go long with overhead resistance so close now.  I wouldn't short it either as volume is expected to be super light this week.  I would only go long if it rolled over and fell into the close to make a higher low then the 2555 level and lower low then the current premarket low of 2568 as that would likely setup a higher low on the MACD's, which would be positive divergence going into Tuesday.  If we could do that then I'd be interesting going long.  Otherwise I'll have to wait on a better setup for the next long or short.

It looks like we already had the strongest wave up last Thursday, which generally is the wave 3 or C wave, and that's the wave I like to catch.  If that was the case then we could be in the 5th wave up now and there's no telling how high it can go.  It might be a strong wave or a weak one.  It could sub-divide into 5 smaller waves, which would be likely if my first thoughts of a move up to resistance and then sideways the rest of the day is what happens.  I'd then think that this likely 5th wave up is dividing and the first move up into the falling red trendline would be the smaller wave 1, then the sideways wave 2 into the close.  That would setup a smaller wave 3, 4, and 5 to follow to complete this 5th wave up.  We might see the smaller wave 3 on Tuesday, then the smaller wave 4 down and 5 up on Wednesday... which would end the 5th wave up the day before Thanksgiving and end the entire rally from the January, 2016 starting point.  That would setup the half day after Thanksgiving as the first down move that would start the multi-month correction.

This is all just me guessing of course but it certainly would be the perfect way to end the rally and trick the most bulls as I doubt if many will expect a correction to start in late November and into early December.  So the bulls would probably keep buying the dips while the bears go to sleep for the expected Santa rally, which really doesn't start until after Christmas, so early December could still see some selling before Mr Claus saves the day.  All in all this should be an interesting week as we could indeed finally see an end to this relentless bull for awhile.  Wouldn't that be a "Thanksgiving Surprise?"