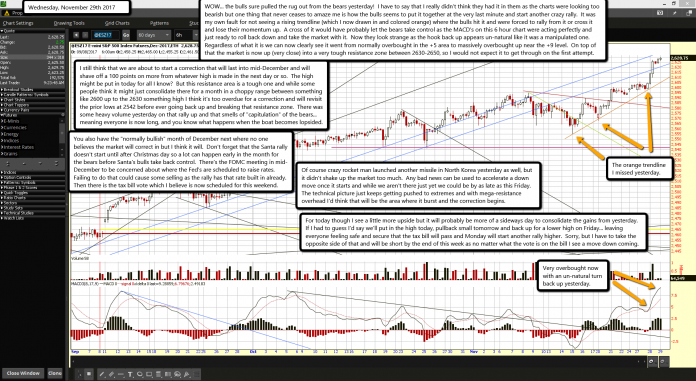 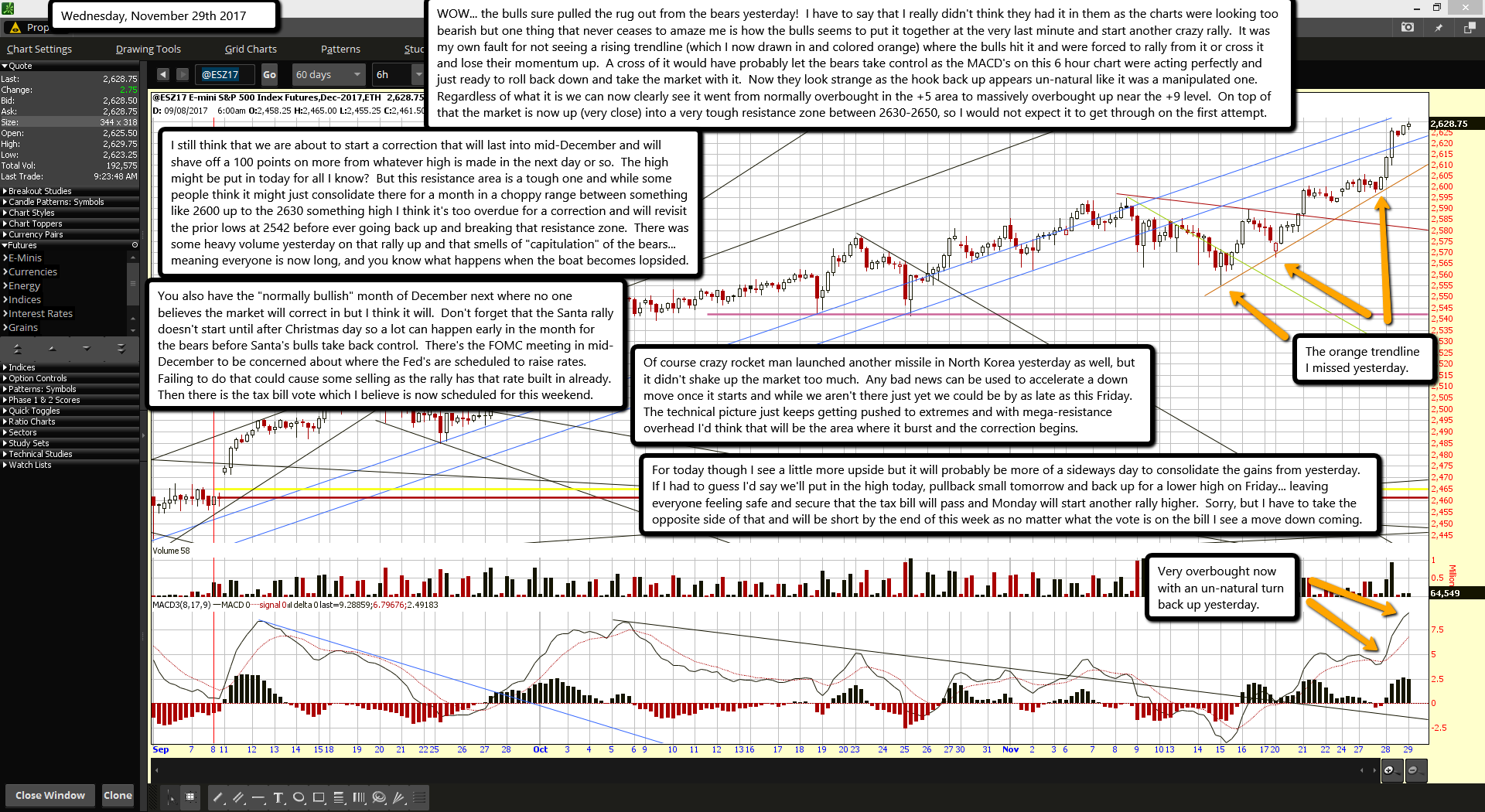 WOW... the bulls sure pulled the rug out from the bears yesterday!  I have to say that I really didn't think they had it in them as the charts were looking too bearish but one thing that never ceases to amaze me is how the bulls seems to put it together at the very last minute and start another crazy rally.  It was my own fault for not seeing a rising trendline (which I now drawn in and colored orange) where the bulls hit it and were forced to rally from it or cross it and lose their momentum up.  A cross of it would have probably let the bears take control as the MACD's on this 6 hour chart were acting perfectly and just ready to roll back down and take the market with it.  Now they look strange as the hook back up appears un-natural like it was a manipulated one.  Regardless of what it is we can now clearly see it went from normally overbought in the +5 area to massively overbought up near the +9 level.  On top of that the market is now up (very close) into a very tough resistance zone between 2630-2650, so I would not expect it to get through on the first attempt.

I still think that we are about to start a correction that will last into mid-December and will shave off a 100 points on more from whatever high is made in the next day or so.  The high might be put in today for all I know?  But this resistance area is a tough one and while some people think it might just consolidate there for a month in a choppy range between something like 2600 up to the 2630 something high I think it's too overdue for a correction and will revisit the prior lows at 2542 before ever going back up and breaking that resistance zone.  There was some heavy volume yesterday on that rally up and that smells of "capitulation" of the bears... meaning everyone is now long, and you know what happens when the boat becomes lopsided.

You also have the "normally bullish" month of December next where no one believes the market will correct in but I think it will.  Don't forget that the Santa rally doesn't start until after Christmas day so a lot can happen early in the month for the bears before Santa's bulls take back control.  There's the FOMC meeting in mid-December to be concerned about where the Fed's are scheduled to raise rates.  Failing to do that could cause some selling as the rally has that rate built in already.  Then there is the tax bill vote which I believe is now scheduled for this weekend.

Of course crazy rocket man launched another missile in North Korea yesterday as well, but it didn't shake up the market too much.  Any bad news can be used to accelerate a down move once it starts and while we aren't there just yet we could be by as late as this Friday.  The technical picture just keeps getting pushed to extremes and with mega-resistance overhead I'd think that will be the area where it burst and the correction begins.

For today though I see a little more upside but it will probably be more of a sideways day to consolidate the gains from yesterday.  If I had to guess I'd say we'll put in the high today, pullback small tomorrow and back up for a lower high on Friday... leaving everyone feeling safe and secure that the tax bill will pass and Monday will start another rally higher.  Sorry, but I have to take the opposite side of that and will be short by the end of this week as no matter what the vote is on the bill I see a move down coming.