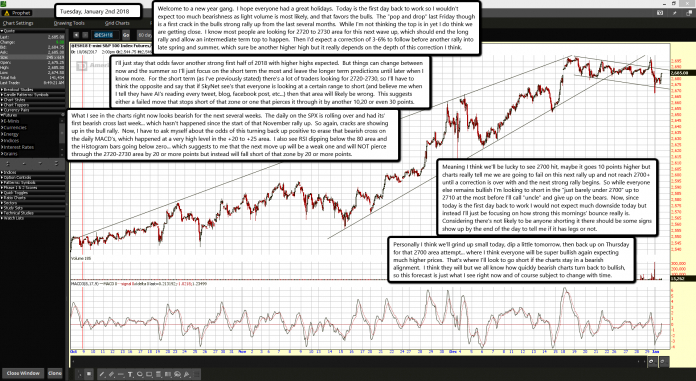 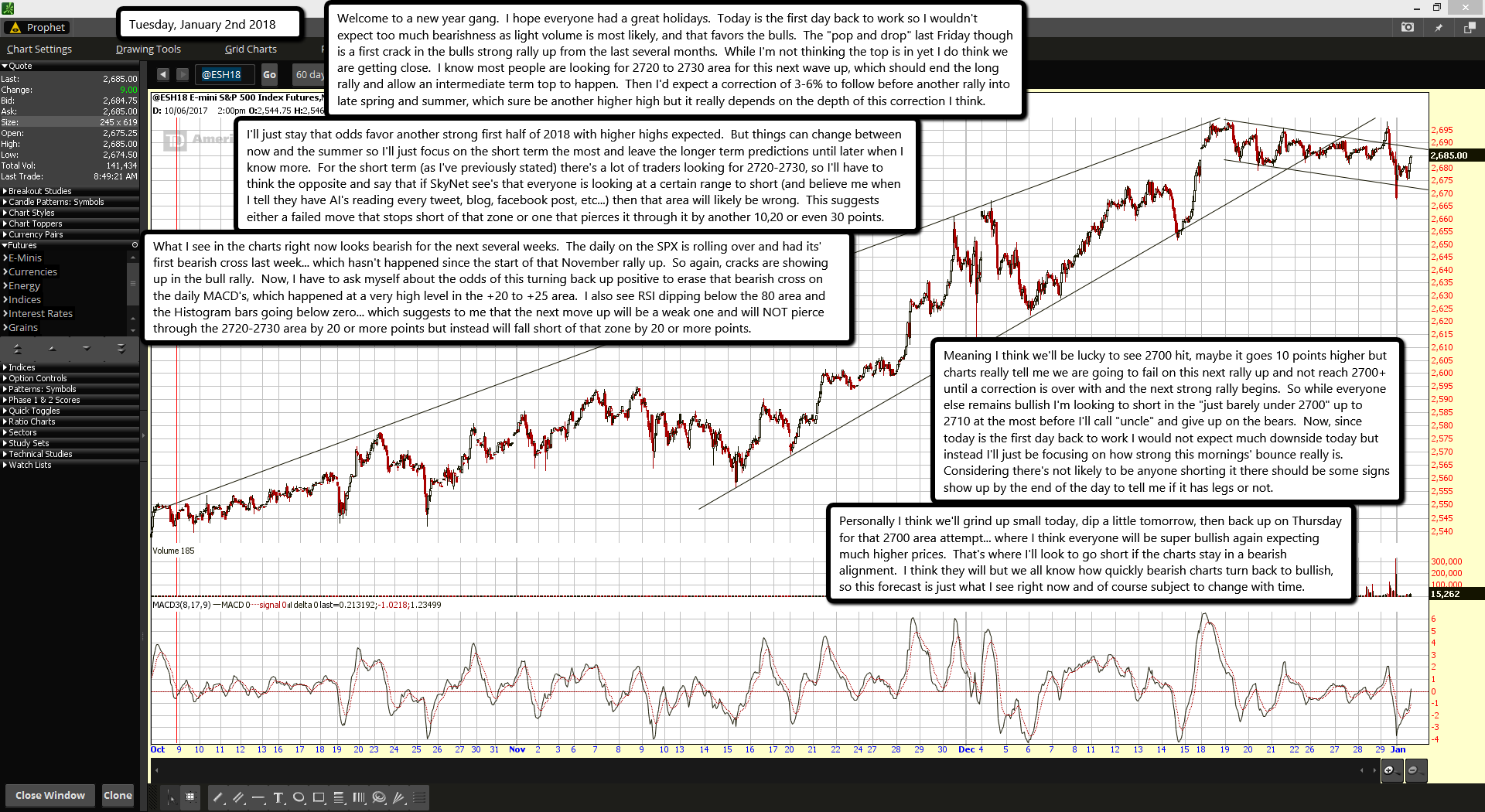 Welcome to a new year gang.  I hope everyone had a great holidays.  Today is the first day back to work so I wouldn't expect too much bearishness as light volume is most likely, and that favors the bulls.  The "pop and drop" last Friday though is a first crack in the bulls strong rally up from the last several months.  While I'm not thinking the top is in yet I do think we are getting close.  I know most people are looking for 2720 to 2730 area for this next wave up, which should end the long rally and allow an intermediate term top to happen.  Then I'd expect a correction of 3-6% to follow before another rally into late spring and summer, which sure be another higher high but it really depends on the depth of this correction I think.

I'll just stay that odds favor another strong first half of 2018 with higher highs expected.  But things can change between now and the summer so I'll just focus on the short term the most and leave the longer term predictions until later when I know more.  For the short term (as I've previously stated) there's a lot of traders looking for 2720-2730, so I'll have to think the opposite and say that if SkyNet see's that everyone is looking at a certain range to short (and believe me when I tell they have AI's reading every tweet, blog, facebook post, etc...) then that area will likely be wrong.  This suggests either a failed move that stops short of that zone or one that pierces it through it by another 10,20 or even 30 points.

What I see in the charts right now looks bearish for the next several weeks.  The daily on the SPX is rolling over and had its' first bearish cross last week... which hasn't happened since the start of that November rally up.  So again, cracks are showing up in the bull rally.  Now, I have to ask myself about the odds of this turning back up positive to erase that bearish cross on the daily MACD's, which happened at a very high level in the +20 to +25 area.  I also see RSI dipping below the 80 area and the Histogram bars going below zero... which suggests to me that the next move up will be a weak one and will NOT pierce through the 2720-2730 area by 20 or more points but instead will fall short of that zone by 20 or more points.

Meaning I think we'll be lucky to see 2700 hit, maybe it goes 10 points higher but charts really tell me we are going to fail on this next rally up and not reach 2700+ until a correction is over with and the next strong rally begins.  So while everyone else remains bullish I'm looking to short in the "just barely under 2700" up to 2710 at the most before I'll call "uncle" and give up on the bears.  Now, since today is the first day back to work I would not expect much downside today but instead I'll just be focusing on how strong this mornings' bounce really is.  Considering there's not likely to be anyone shorting it there should be some signs show up by the end of the day to tell me if it has legs or not.

Personally I think we'll grind up small today, dip a little tomorrow, then back up on Thursday for that 2700 area attempt... where I think everyone will be super bullish again expecting much higher prices.  That's where I'll look to go short if the charts stay in a bearish alignment.  I think they will but we all know how quickly bearish charts turn back to bullish, so this forecast is just what I see right now and of course subject to change with time.