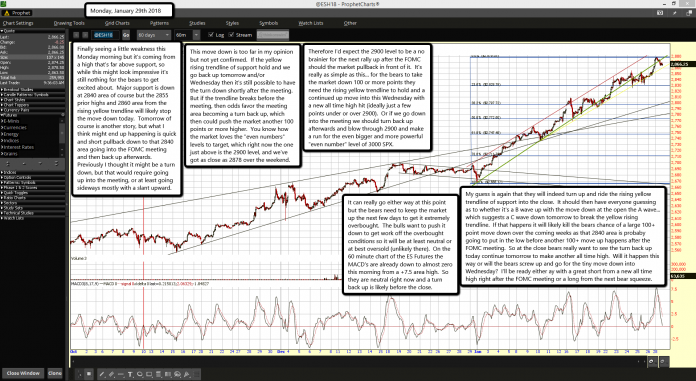 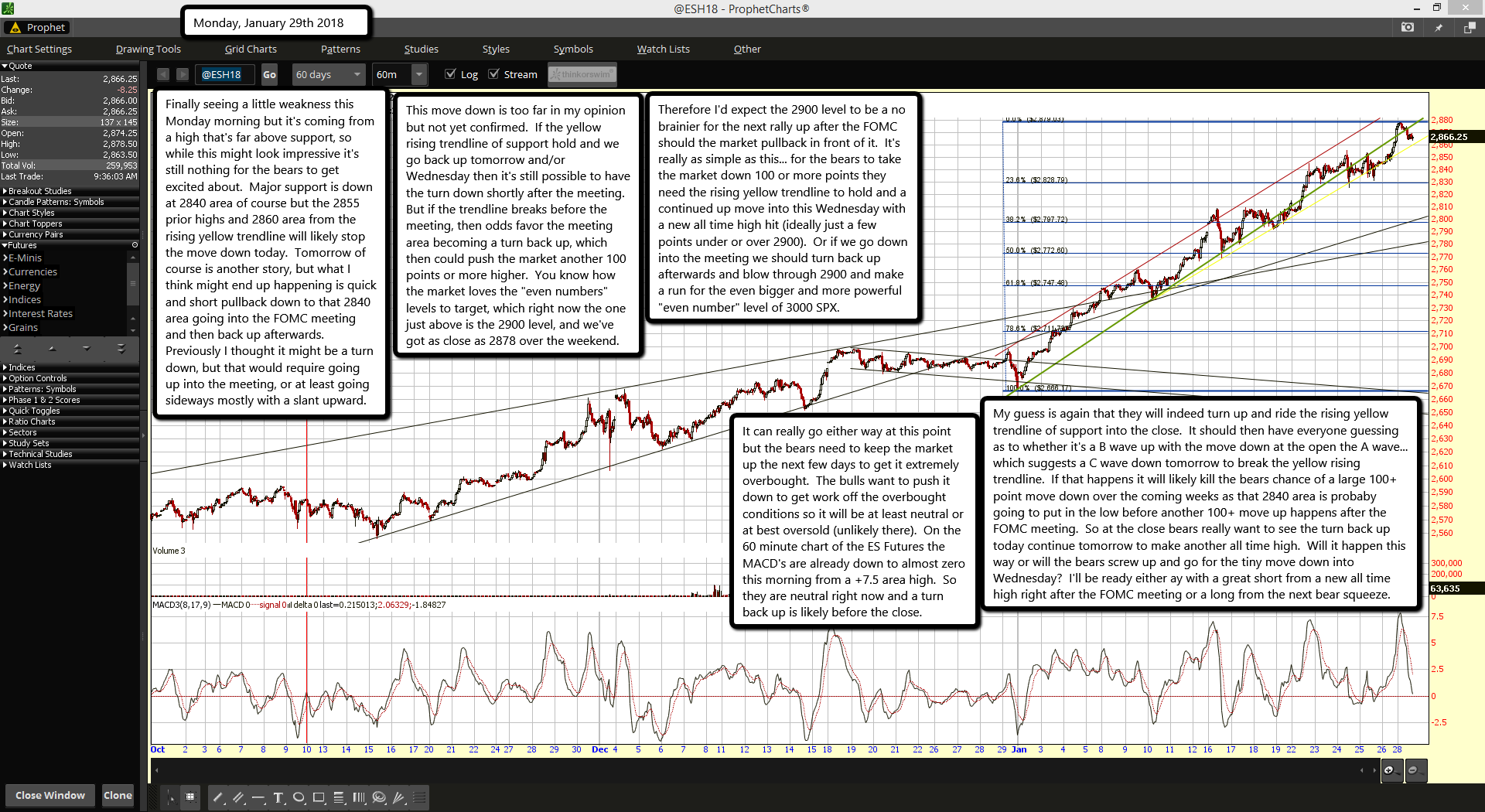 Finally seeing a little weakness this Monday morning but it's coming from a high that's far above support, so while this might look impressive it's still nothing for the bears to get excited about.  Major support is down at 2840 area of course but the 2855 prior highs and 2860 area from the rising yellow trendline will likely stop the move down today.  Tomorrow of course is another story, but what I think might end up happening is quick and short pullback down to that 2840 area going into the FOMC meeting and then back up afterwards.  Previously I thought it might be a turn down, but that would require going up into the meeting, or at least going sideways mostly with a slant upward.

This move down is too far in my opinion but not yet confirmed.  If the yellow rising trendline of support hold and we go back up tomorrow and/or Wednesday then it's still possible to have the turn down shortly after the meeting.  But if the trendline breaks before the meeting, then odds favor the meeting area becoming a turn back up, which then could push the market another 100 points or more higher.  You know how the market loves the "even numbers" levels to target, which right now the one just above is the 2900 level, and we've got as close as 2878 over the weekend.

Therefore I'd expect the 2900 level to be a no brainier for the next rally up after the FOMC should the market pullback in front of it.  It's really as simple as this... for the bears to take the market down 100 or more points they need the rising yellow trendline to hold and a continued up move into this Wednesday with a new all time high hit (ideally just a few points under or over 2900).  Or if we go down into the meeting we should turn back up afterwards and blow through 2900 and make a run for the even bigger and more powerful "even number" level of 3000 SPX.

It can really go either way at this point but the bears need to keep the market up the next few days to get it extremely overbought.  The bulls want to push it down to get work off the overbought conditions so it will be at least neutral or at best oversold (unlikely there).  On the 60 minute chart of the ES Futures the MACD's are already down to almost zero this morning from a +7.5 area high.  So they are neutral right now and a turn back up is likely before the close.

My guess is again that they will indeed turn up and ride the rising yellow trendline of support into the close.  It should then have everyone guessing as to whether it's a B wave up with the move down at the open the A wave... which suggests a C wave down tomorrow to break the yellow rising trendline.  If that happens it will likely kill the bears chance of a large 100+ point move down over the coming weeks as that 2840 area is probaby going to put in the low before another 100+ move up happens after the FOMC meeting.  So at the close bears really want to see the turn back up today continue tomorrow to make another all time high.  Will it happen this way or will the bears screw up and go for the tiny move down into Wednesday?  I'll be ready either ay with a great short from a new all time high right after the FOMC meeting or a long from the next bear squeeze.