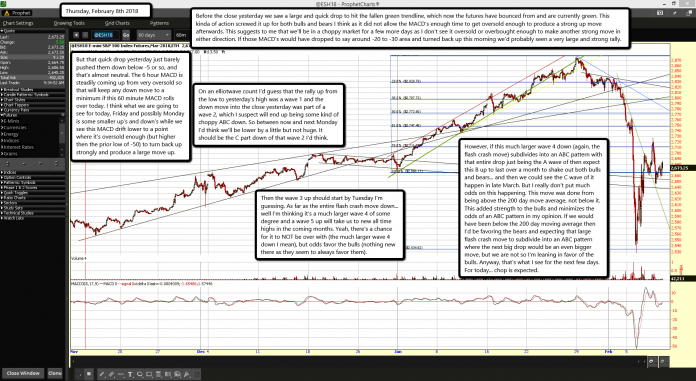 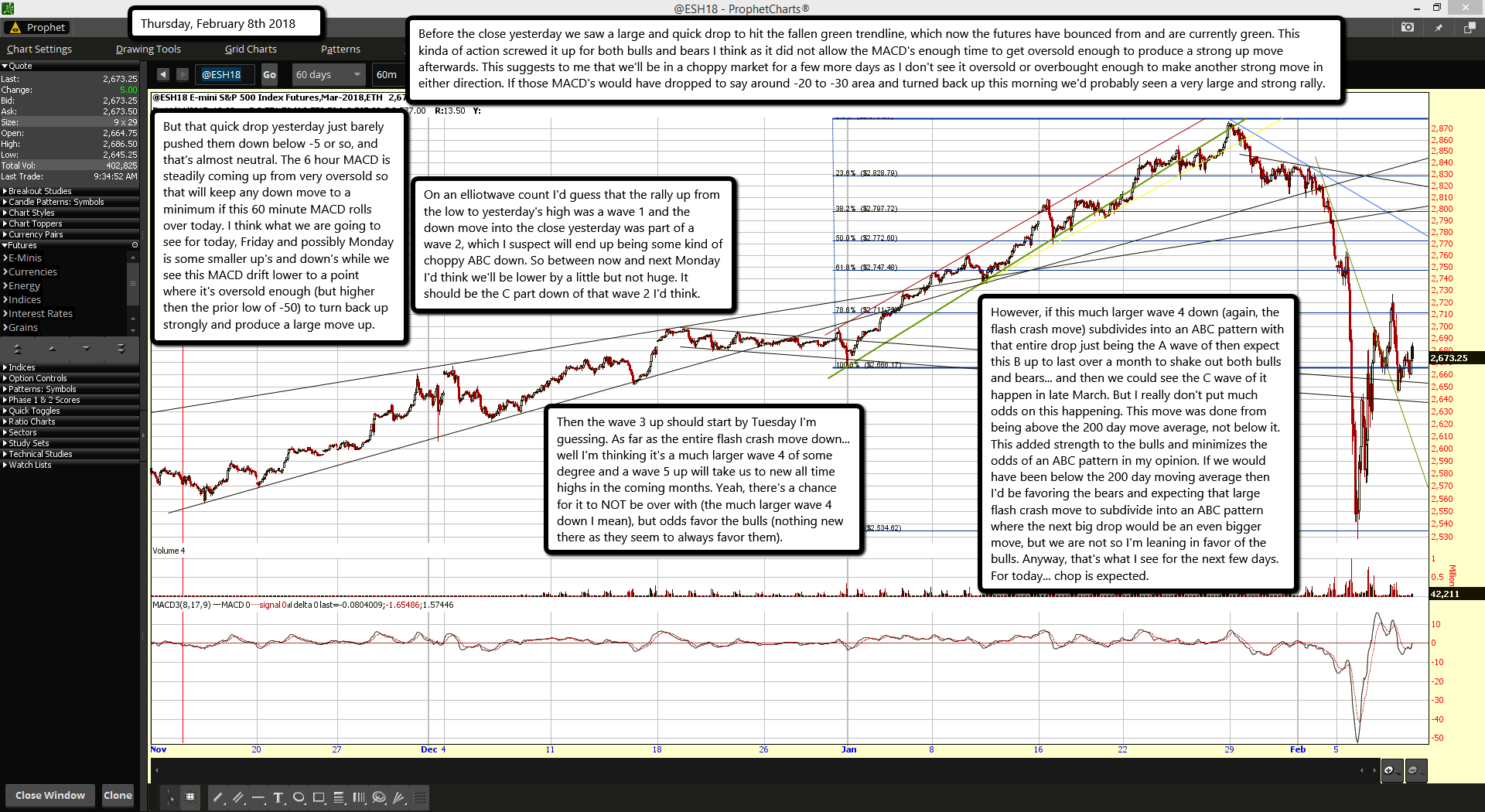 Before the close yesterday we saw a large and quick drop to hit the fallen green trendline, which now the futures have bounced from and are currently green. This kinda of action screwed it up for both bulls and bears I think as it did not allow the MACD's enough time to get oversold enough to produce a strong up move afterwards. This suggests to me that we'll be in a choppy market for a few more days as I don't see it oversold or overbought enough to make another strong move in either direction. If those MACD's would have dropped to say around -20 to -30 area and turned back up this morning we'd probably seen a very large and strong rally.

But that quick drop yesterday just barely pushed them down below -5 or so, and that's almost neutral. The 6 hour MACD is steadily coming up from very oversold so that will keep any down move to a minimum if this 60 minute MACD rolls over today. I think what we are going to see for today, Friday and possibly Monday is some smaller up's and down's while we see this MACD drift lower to a point where it's oversold enough (but higher then the prior low of -50) to turn back up strongly and produce a large move up.

On an elliotwave count I'd guess that the rally up from the low to yesterday's high was a wave 1 and the down move into the close yesterday was part of a wave 2, which I suspect will end up being some kind of choppy ABC down. So between now and next Monday I'd think we'll be lower by a little but not huge. It should be the C part down of that wave 2 I'd think.

Then the wave 3 up should start by Tuesday I'm guessing. As far as the entire flash crash move down... well I'm thinking it's a much larger wave 4 of some degree and a wave 5 up will take us to new all time highs in the coming months. Yeah, there's a chance for it to NOT be over with (the much larger wave 4 down I mean), but odds favor the bulls (nothing new there as they seem to always favor them).

However, if this much larger wave 4 down (again, the flash crash move) subdivides into an ABC pattern with that entire drop just being the A wave of then expect this B up to last over a month to shake out both bulls and bears... and then we could see the C wave of it happen in late March. But I really don't put much odds on this happening. This move was done from being above the 200 day move average, not below it. This added strength to the bulls and minimizes the odds of an ABC pattern in my opinion. If we would have been below the 200 day moving average then I'd be favoring the bears and expecting that large flash crash move to subdivide into an ABC pattern where the next big drop would be an even bigger move, but we are not so I'm leaning in favor of the bulls. Anyway, that's what I see for the next few days. For today... chop is expected.