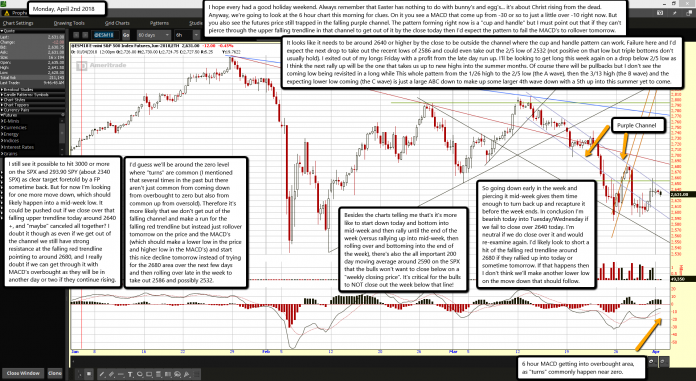 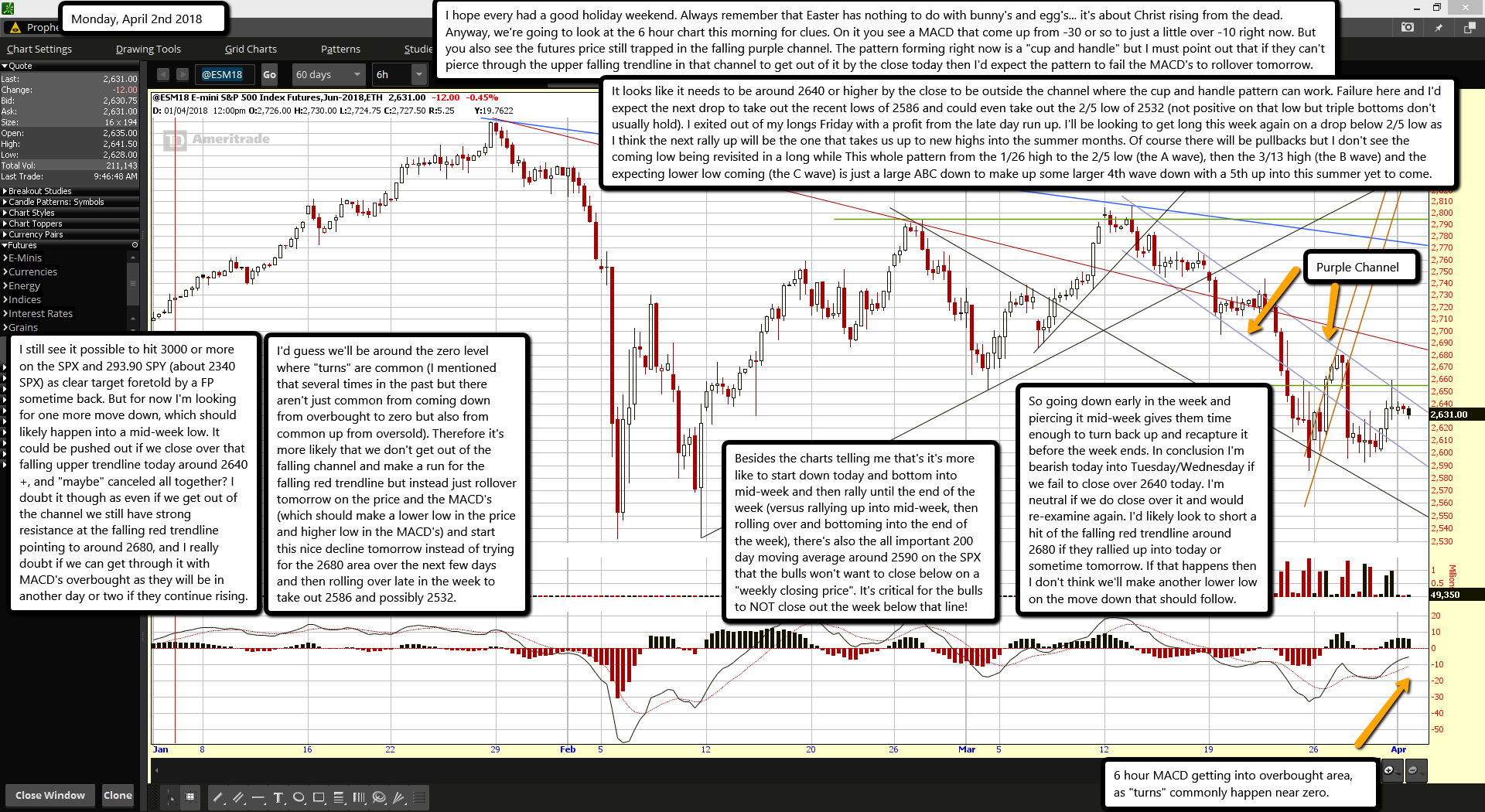 I hope every had a good holiday weekend. Always remember that Easter has nothing to do with bunny's and egg's... it's about Christ rising from the dead. Anyway, we're going to look at the 6 hour chart this morning for clues. On it you see a MACD that come up from -30 or so to just a little over -10 right now. But you also see the futures price still trapped in the falling purple channel. The pattern forming right now is a "cup and handle" but I must point out that if they can't pierce through the upper falling trendline in that channel to get out of it by the close today then I'd expect the pattern to fail the MACD's to rollover tomorrow.

It looks like it needs to be around 2640 or higher by the close to be outside the channel where the cup and handle pattern can work. Failure here and I'd expect the next drop to take out the recent lows of 2586 and could even take out the 2/5 low of 2532 (not positive on that low but triple bottoms don't usually hold). I exited out of my longs Friday with a profit from the late day run up. I'll be looking to get long this week again on a drop below 2/5 low as I think the next rally up will be the one that takes us up to new highs into the summer months. Of course there will be pullbacks but I don't see the coming low being revisited in a long while This whole pattern from the 1/26 high to the 2/5 low (the A wave), then the 3/13 high (the B wave) and the expecting lower low coming (the C wave) is just a large ABC down to make up some larger 4th wave down with a 5th up into this summer yet to come.

I still see it possible to hit 3000 or more on the SPX and 293.90 SPY (about 2340 SPX) as clear target foretold by a FP sometime back. But for now I'm looking for one more move down, which should likely happen into a mid-week low. It could be pushed out if we close over that falling upper trendline today around 2640+, and "maybe" canceled all together? I doubt it though as even if we get out of the channel we still have strong resistance at the falling red trendline pointing to around 2680, and I really doubt if we can get through it with MACD's overbought as they will be in another day or two if they continue rising.

I'd guess we'll be around the zero level where "turns" are common (I mentioned that several times in the past but there aren't just common from coming down from overbought to zero but also from common up from oversold). Therefore it's more likely that we don't get out of the falling channel and make a run for the falling red trendline but instead just rollover tomorrow on the price and the MACD's (which should make a lower low in the price and higher low in the MACD's) and start this nice decline tomorrow instead of trying for the 2680 area over the next few days and then rolling over late in the week to take out 2586 and possibly 2532.

Besides the charts telling me that's it's more like to start down today and bottom into mid-week and then rally until the end of the week (versus rallying up into mid-week, then rolling over and bottoming into the end of the week), there's also the all important 200 day moving average around 2590 on the SPX that the bulls won't want to close below on a "weekly closing price". It's critical for the bulls to NOT close out the week below that line!

So going down early in the week and piercing it mid-week gives them time enough to turn back up and recapture it before the week ends. In conclusion I'm bearish today into Tuesday/Wednesday if we fail to close over 2640 today. I'm neutral if we do close over it and would re-examine again. I'd likely look to short a hit of the falling red trendline around 2680 if they rallied up into today or sometime tomorrow. If that happens then I don't think we'll make another lower low on the move down that should follow.