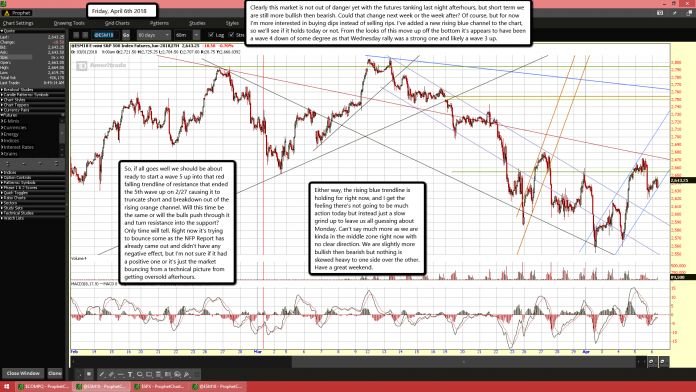 Clearly this market is not out of danger yet with the futures tanking last night afterhours, but short term we are still more bullish then bearish. Could that change next week or the week after? Of course, but for now I'm more interested in buying dips instead of selling rips. I've added a new rising blue channel to the chart, so we'll see if it holds today or not. From the looks of this move up off the bottom it's appears to have been a wave 4 down of some degree as that Wednesday rally was a strong one and likely a wave 3 up.

So, if all goes well we should be about ready to start a wave 5 up into that red falling trendline of resistance that ended the 5th wave up on 2/27 causing it to truncate short and breakdown out of the rising orange channel. Will this time be the same or will the bulls push through it and turn resistance into the support? Only time will tell. Right now it's trying to bounce some as the NFP Report has already came out and didn't have any negative effect, but I'm not sure if it had a positive one or it's just the market bouncing from a technical picture from getting oversold afterhours.

Either way, the rising blue trendline is holding for right now, and I get the feeling there's not going to be much action today but instead just a slow grind up to leave us all guessing about Monday. Can't say much more as we are kinda in the middle zone right now with no clear direction. We are slightly more bullish then bearish but nothing is skewed heavy to one side over the other. Have a great weekend.