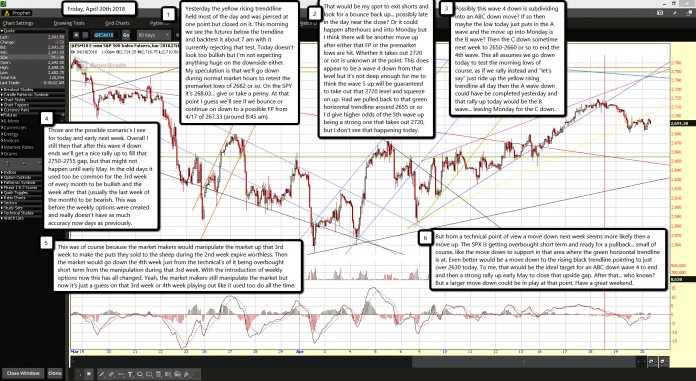 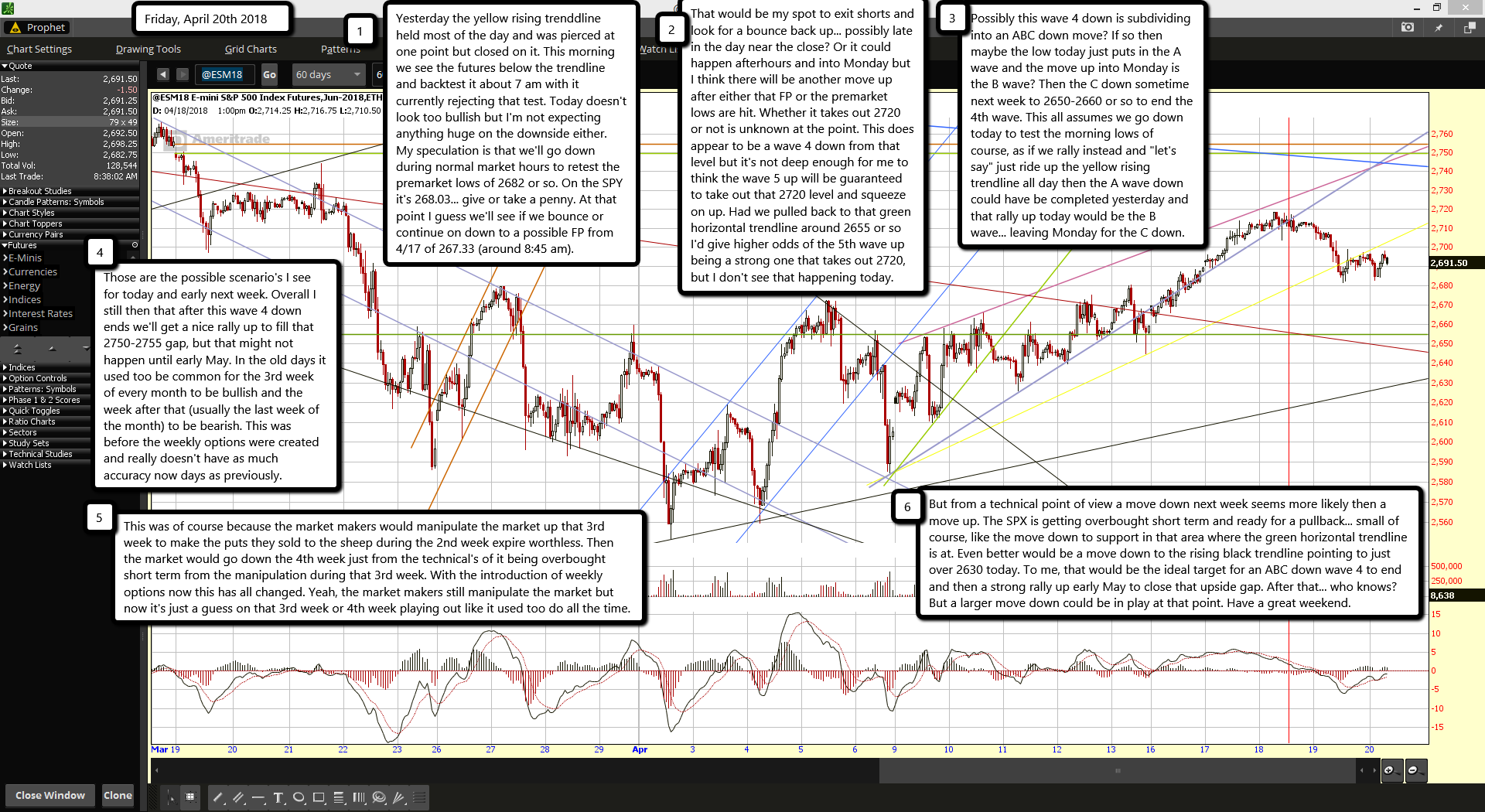 Yesterday the yellow rising trenddline held most of the day and was pierced at one point but closed on it. This morning we see the futures below the trendline and backtest it about 7 am with it currently rejecting that test. Today doesn't look too bullish but I'm not expecting anything huge on the downside either. My speculation is that we'll go down during normal market hours to retest the premarket lows of 2682 or so. On the SPY it's 268.03... give or take a penny. At that point I guess we'll see if we bounce or continue on down to a possible FP from 4/17 of 267.33 (around 8:45 am).

That would be my spot to exit shorts and look for a bounce back up... possibly late in the day near the close? Or it could happen afterhours and into Monday but I think there will be another move up after either that FP or the premarket lows are hit. Whether it takes out 2720 or not is unknown at the point. This does appear to be a wave 4 down from that level but it's not deep enough for me to think the wave 5 up will be guaranteed to take out that 2720 level and squeeze on up. Had we pulled back to that green horizontal trendline around 2655 or so I'd give higher odds of the 5th wave up being a strong one that takes out 2720, but I don't see that happening today.

Possibly this wave 4 down is subdividing into an ABC down move? If so then maybe the low today just puts in the A wave and the move up into Monday is the B wave? Then the C down sometime next week to 2650-2660 or so to end the 4th wave. This all assumes we go down today to test the morning lows of course, as if we rally instead and "let's say" just ride up the yellow rising trendline all day then the A wave down could have be completed yesterday and that rally up today would be the B wave... leaving Monday for the C down.

Those are the possible scenario's I see for today and early next week. Overall I still then that after this wave 4 down ends we'll get a nice rally up to fill that 2750-2755 gap, but that might not happen until early May. In the old days it used too be common for the 3rd week of every month to be bullish and the week after that (usually the last week of the month) to be bearish. This was before the weekly options were created and really doesn't have as much accuracy now days as previously.

But from a technical point of view a move down next week seems more likely then a move up. The SPX is getting overbought short term and ready for a pullback... small of course, like the move down to support in that area where the green horizontal trendline is at. Even better would be a move down to the rising black trendline pointing to just over 2630 today. To me, that would be the ideal target for an ABC down wave 4 to end and then a strong rally up early May to close that upside gap. After that... who knows? But a larger move down could be in play at that point. Have a great weekend.