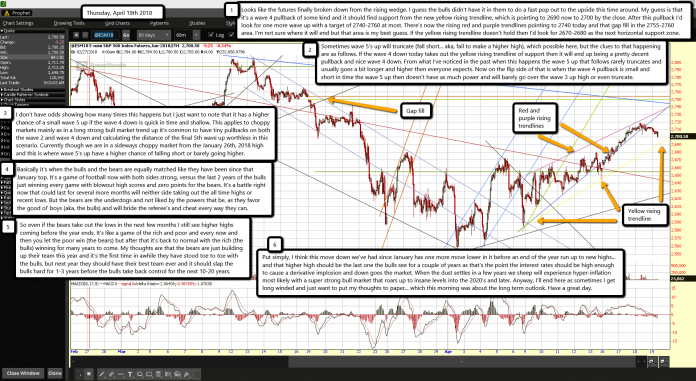 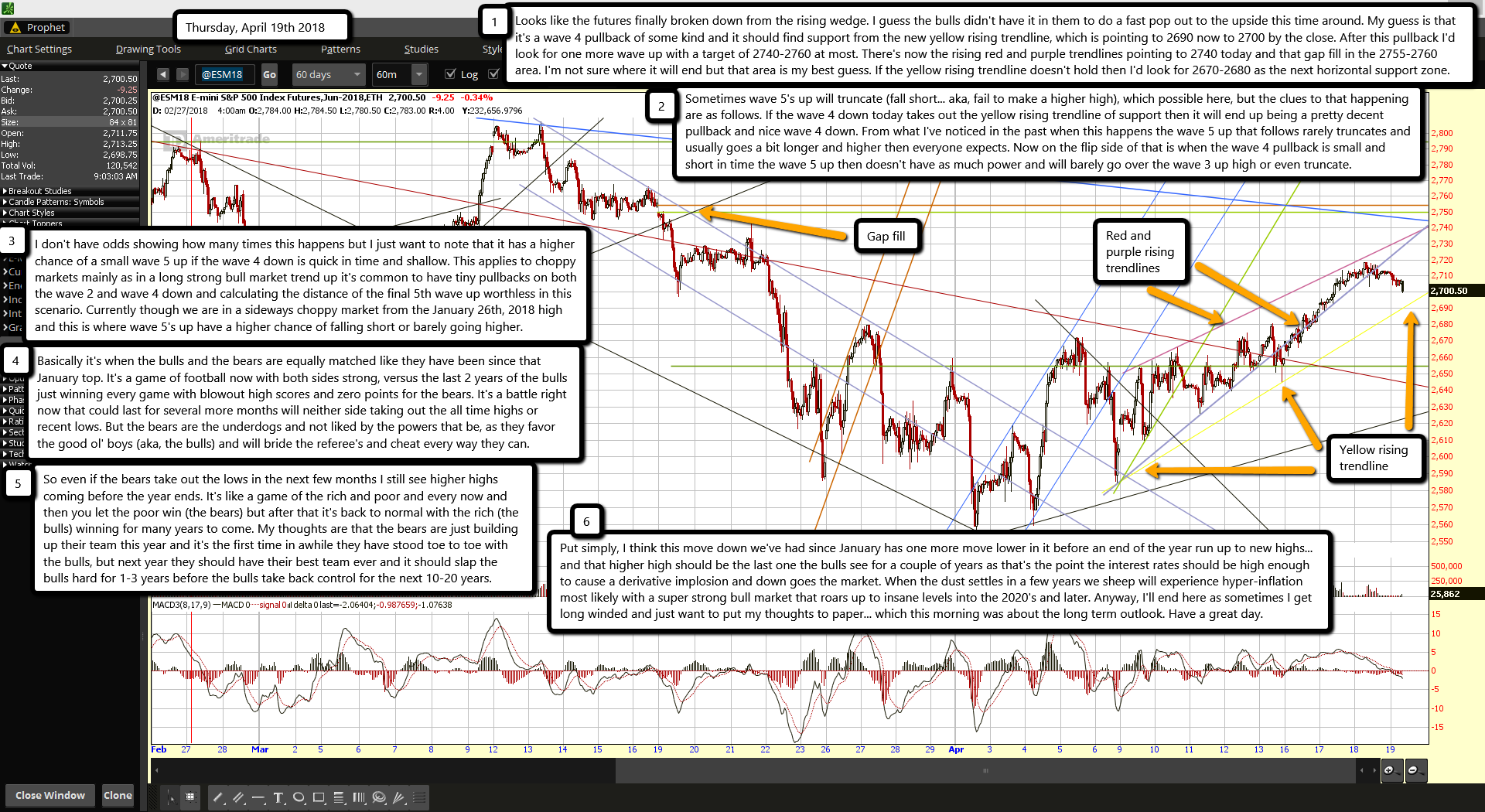 Looks like the futures finally broken down from the rising wedge. I guess the bulls didn't have it in them to do a fast pop out to the upside this time around. My guess is that it's a wave 4 pullback of some kind and it should find support from the new yellow rising trendline, which is pointing to 2690 now to 2700 by the close. After this pullback I'd look for one more wave up with a target of 2740-2760 at most. There's now the rising red and purple trendlines pointing to 2740 today and that gap fill in the 2755-2760 area. I'm not sure where it will end but that area is my best guess. If the yellow rising trendline doesn't hold then I'd look for 2670-2680 as the next horizontal support zone.

Sometimes wave 5's up will truncate (fall short... aka, fail to make a higher high), which possible here, but the clues to that happening are as follows. If the wave 4 down today takes out the yellow rising trendline of support then it will end up being a pretty decent pullback and nice wave 4 down. From what I've noticed in the past when this happens the wave 5 up that follows rarely truncates and usually goes a bit longer and higher then everyone expects. Now on the flip side of that is when the wave 4 pullback is small and short in time the wave 5 up then doesn't have as much power and will barely go over the wave 3 up high or even truncate.

I don't have odds showing how many times this happens but I just want to note that it has a higher chance of a small wave 5 up if the wave 4 down is quick in time and shallow. This applies to choppy markets mainly as in a long strong bull market trend up it's common to have tiny pullbacks on both the wave 2 and wave 4 down and calculating the distance of the final 5th wave up worthless in this scenario. Currently though we are in a sideways choppy market from the January 26th, 2018 high and this is where wave 5's up have a higher chance of falling short or barely going higher.

Basically it's when the bulls and the bears are equally matched like they have been since that January top. It's a game of football now with both sides strong, versus the last 2 years of the bulls just winning every game with blowout high scores and zero points for the bears. It's a battle right now that could last for several more months will neither side taking out the all time highs or recent lows. But the bears are the underdogs and not liked by the powers that be, as they favor the good ol' boys (aka, the bulls) and will bride the referee's and cheat every way they can.

So even if the bears take out the lows in the next few months I still see higher highs coming before the year ends. It's like a game of the rich and poor and every now and then you let the poor win (the bears) but after that it's back to normal with the rich (the bulls) winning for many years to come. My thoughts are that the bears are just building up their team this year and it's the first time in awhile they have stood toe to toe with the bulls, but next year they should have their best team ever and it should slap the bulls hard for 1-3 years before the bulls take back control for the next 10-20 years.

Put simply, I think this move down we've had since January has one more move lower in it before an end of the year run up to new highs... and that higher high should be the last one the bulls see for a couple of years as that's the point the interest rates should be high enough to cause a derivative implosion and down goes the market. When the dust settles in a few years we sheep will experience hyper-inflation most likely with a super strong bull market that roars up to insane levels into the 2020's and later. Anyway, I'll end here as sometimes I get long winded and just want to put my thoughts to paper... which this morning was about the long term outlook. Have a great day.