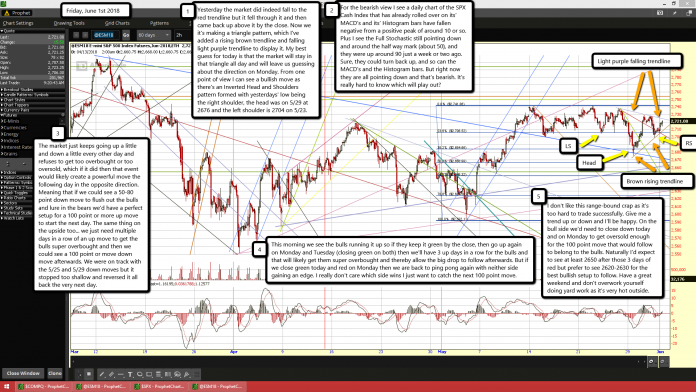 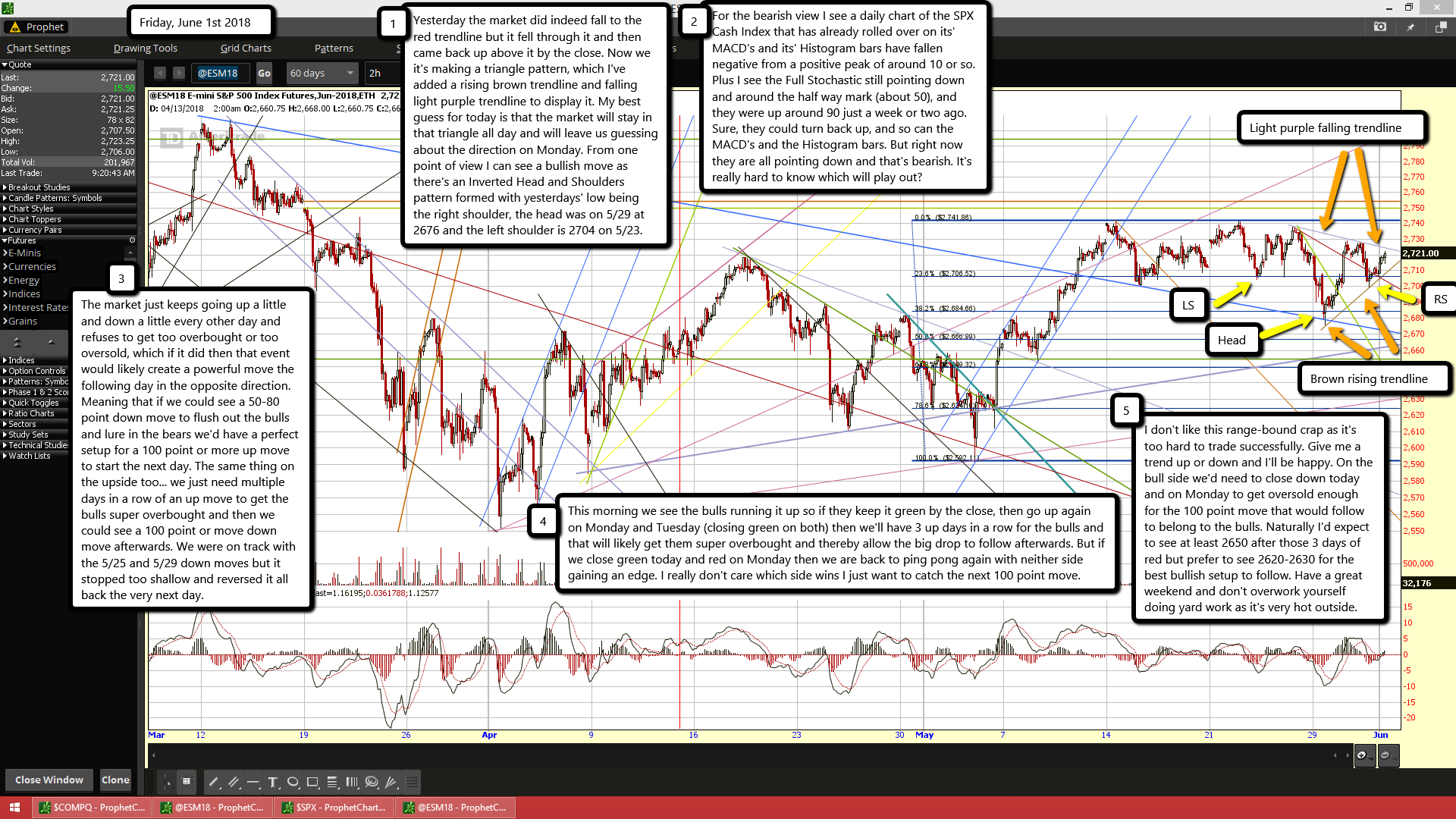 Yesterday the market did indeed fall to the red trendline but it fell through it and then came back up above it by the close. Now we it's making a triangle pattern, which I've added a rising brown trendline and falling light purple trendline to display it. My best guess for today is that the market will stay in that triangle all day and will leave us guessing about the direction on Monday. From one point of view I can see a bullish move as there's an Inverted Head and Shoulders pattern formed with yesterdays' low being the right shoulder, the head was on 5/29 at 2676 and the left shoulder is 2704 on 5/23.

For the bearish view I see a daily chart of the SPX Cash Index that has already rolled over on its' MACD's and its' Histogram bars have fallen negative from a positive peak of around 10 or so. Plus I see the Full Stochastic still pointing down and around the half way mark (about 50), and they were up around 90 just a week or two ago. Sure, they could turn back up, and so can the MACD's and the Histogram bars. But right now they are all pointing down and that's bearish. It's really hard to know which will play out?

The market just keeps going up a little and down a little every other day and refuses to get too overbought or too oversold, which if it did then that event would likely create a powerful move the following day in the opposite direction. Meaning that if we could see a 50-80 point down move to flush out the bulls and lure in the bears we'd have a perfect setup for a 100 point or more up move to start the next day. The same thing on the upside too... we just need multiple days in a row of an up move to get the bulls super overbought and then we could see a 100 point or move down move afterwards. We were on track with the 5/25 and 5/29 down moves but it stopped too shallow and reversed it all back the very next day.

This morning we see the bulls running it up so if they keep it green by the close, then go up again on Monday and Tuesday (closing green on both) then we'll have 3 up days in a row for the bulls and that will likely get them super overbought and thereby allow the big drop to follow afterwards. But if we close green today and red on Monday then we are back to ping pong again with neither side gaining an edge. I really don't care which side wins I just want to catch the next 100 point move.

I don't like this range-bound crap as it's too hard to trade successfully. Give me a trend up or down and I'll be happy. On the bull side we'd need to close down today and on Monday to get oversold enough for the 100 point move that would follow to belong to the bulls. Naturally I'd expect to see at least 2650 after those 3 days of red but prefer to see 2620-2630 for the best bullish setup to follow. Have a great weekend and don't overwork yourself doing yard work as it's very hot outside.