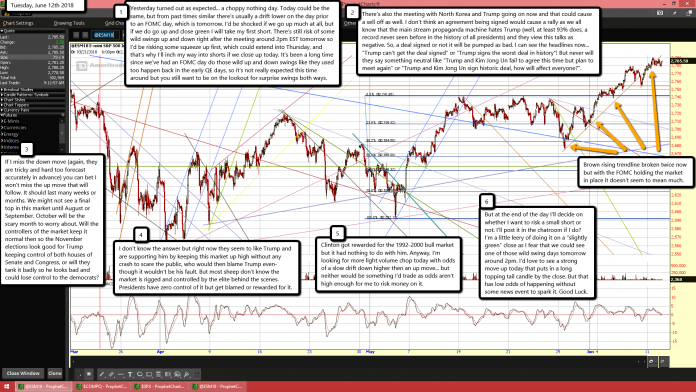 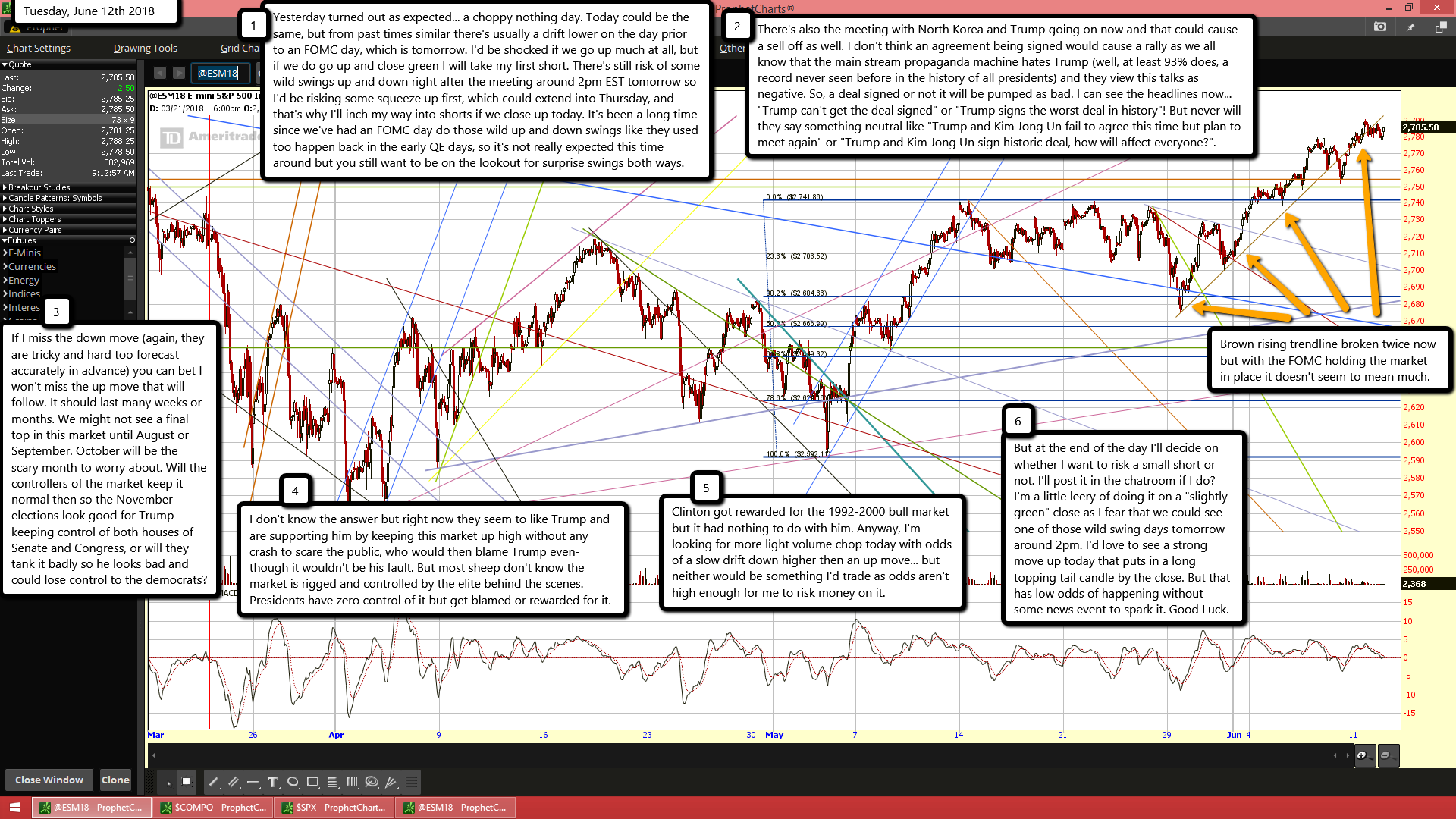 Yesterday turned out as expected... a choppy nothing day. Today could be the same, but from past times similar there's usually a drift lower on the day prior to an FOMC day, which is tomorrow. I'd be shocked if we go up much at all, but if we do go up and close green I will take my first short. There's still risk of some wild swings up and down right after the meeting around 2pm EST tomorrow so I'd be risking some squeeze up first, which could extend into Thursday, and that's why I'll inch my way into shorts if we close up today. It's been a long time since we've had an FOMC day do those wild up and down swings like they used too happen back in the early QE days, so it's not really expected this time around but you still want to be on the lookout for surprise swings both ways.

There's also the meeting with North Korea and Trump going on now and that could cause a sell off as well. I don't think an agreement being signed would cause a rally as we all know that the main stream propaganda machine hates Trump (well, at least 93% does, a record never seen before in the history of all presidents) and they view this talks as negative. So, a deal signed or not it will be pumped as bad. I can see the headlines now... "Trump can't get the deal signed" or "Trump signs the worst deal in history"! But never will they say something neutral like "Trump and Kim Jong Un fail to agree this time but plan to meet again" or "Trump and Kim Jong Un sign historic deal, how will affect everyone?".

The bottom line is simple... the media will spin anything Trump does a bad, and the market therefore will either react neutral or negative... positive is highly unlikely. We have both the FOMC meeting and the NK deal as possible reason for a market drop starting soon. Will it start Wednesday or will they push it out a day or two? I don't know but do think the market is still vulnerable for a sharp drop... at least until both events pass. Overall I'm bullish into this summer/fall as I do see higher prices with a new all time coming. But this week the bears still have a chance at a surprise attack. It should be short leaved though and a great buying opportunity.

If I miss the down move (again, they are tricky and hard too forecast accurately in advance) you can bet I won't miss the up move that will follow. It should last many weeks or months. We might not see a final top in this market until August or September. October will be the scary month to worry about. Will the controllers of the market keep it normal then so the November elections look good for Trump keeping control of both houses of Senate and Congress, or will they tank it badly so he looks bad and could lose control to the democrats?

I don't know the answer but right now they seem to like Trump and are supporting him by keeping this market up high without any crash to scare the public, who would then blame Trump even-though it wouldn't be his fault. But most sheep don't know the market is rigged and controlled by the elite behind the scenes. Presidents have zero control of it but get blamed or rewarded for it.

Clinton got rewarded for the 1992-2000 bull market but it had nothing to do with him. Anyway, I'm looking for more light volume chop today with odds of a slow drift down higher then an up move... but neither would be something I'd trade as odds aren't high enough for me to risk money on it.

But at the end of the day I'll decide on whether I want to risk a small short or not. I'll post it in the chatroom if I do? I'm a little leery of doing it on a "slightly green" close as I fear that we could see one of those wild swing days tomorrow around 2pm. I'd love to see a strong move up today that puts in a long topping tail candle by the close. But that has low odds of happening without some news event to spark it. Good Luck.