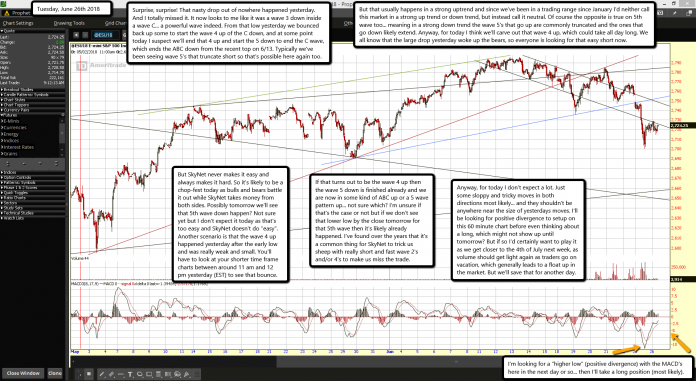 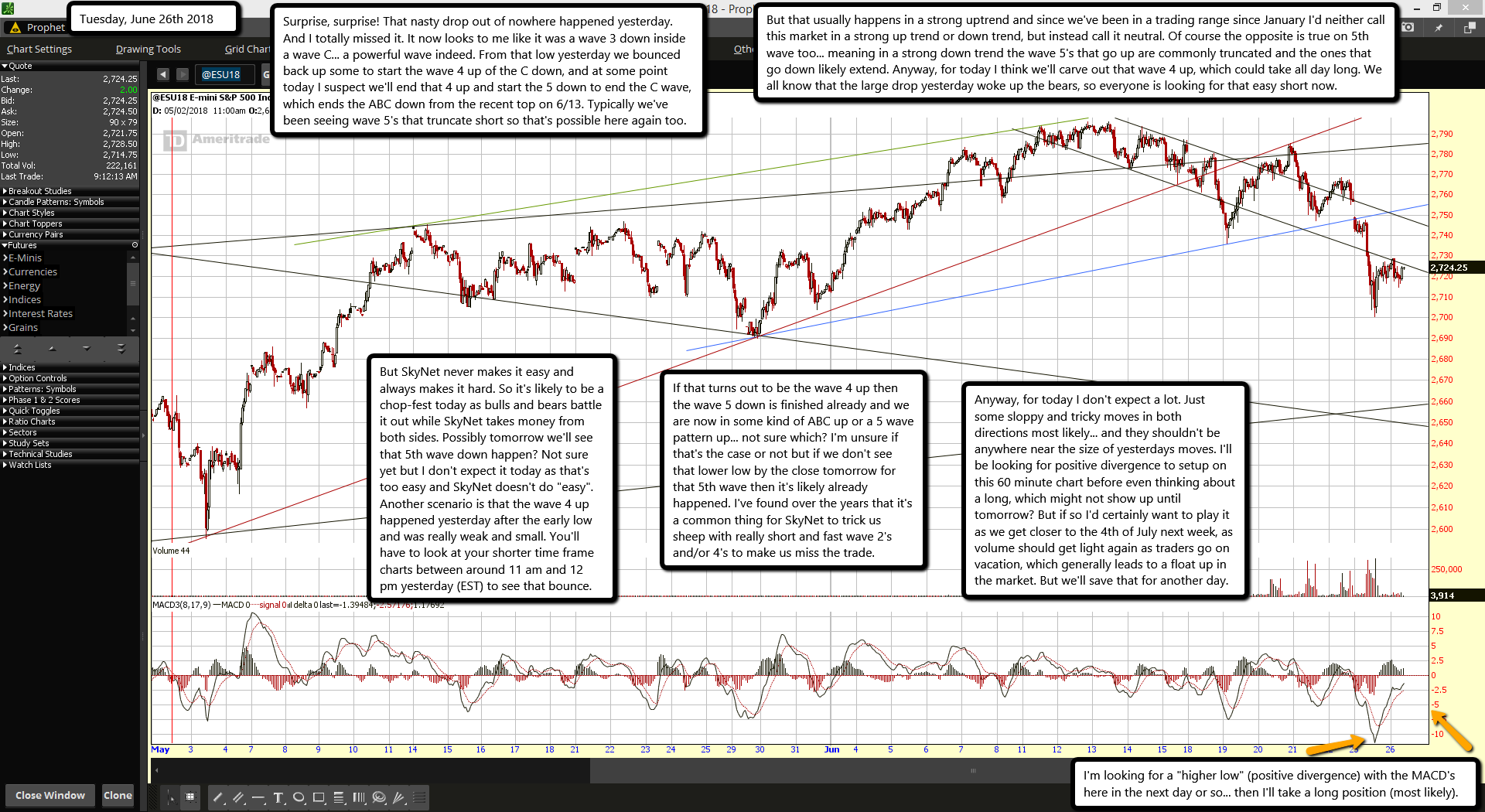 Surprise, surprise! That nasty drop out of nowhere happened yesterday. And I totally missed it. It now looks to me like it was a wave 3 down inside a wave C... a powerful wave indeed. From that low yesterday we bounced back up some to start the wave 4 up of the C down, and at some point today I suspect we'll end that 4 up and start the 5 down to end the C wave, which ends the ABC down from the recent top on 6/13. Typically we've been seeing wave 5's that truncate short so that's possible here again too.

But that usually happens in a strong uptrend and since we've been in a trading range since January I'd neither call this market in a strong up trend or down trend, but instead call it neutral. Of course the opposite is true on 5th wave too... meaning in a strong down trend the wave 5's that go up are commonly truncated and the ones that go down likely extend. Anyway, for today I think we'll carve out that wave 4 up, which could take all day long. We all know that the large drop yesterday woke up the bears, so everyone is looking for that easy short now.

But SkyNet never makes it easy and always makes it hard. So it's likely to be a chop-fest today as bulls and bears battle it out while SkyNet takes money from both sides. Possibly tomorrow we'll see that 5th wave down happen? Not sure yet but I don't expect it today as that's too easy and SkyNet doesn't do "easy". Another scenario is that the wave 4 up happened yesterday after the early low and was really weak and small. You'll have to look at your shorter time frame charts between around 11 am and 12 pm yesterday (EST) to see that bounce.

If that turns out to be the wave 4 up then the wave 5 down is finished already and we are now in some kind of ABC up or a 5 wave pattern up... not sure which? I'm unsure if that's the case or not but if we don't see that lower low by the close tomorrow for that 5th wave then it's likely already happened. I've found over the years that it's a common thing for SkyNet to trick us sheep with really short and fast wave 2's and/or 4's to make us miss the trade.

Anyway, for today I don't expect a lot. Just some sloppy and tricky moves in both directions most likely... and they shouldn't be anywhere near the size of yesterdays moves. I'll be looking for positive divergence to setup on this 60 minute chart before even thinking about a long, which might not show up until tomorrow? But if so I'd certainly want to play it as we get closer to the 4th of July next week, as volume should get light again as traders go on vacation, which generally leads to a float up in the market. But we'll save that for another day.