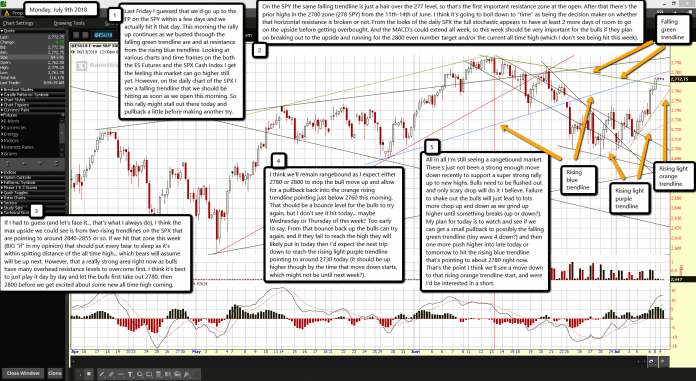 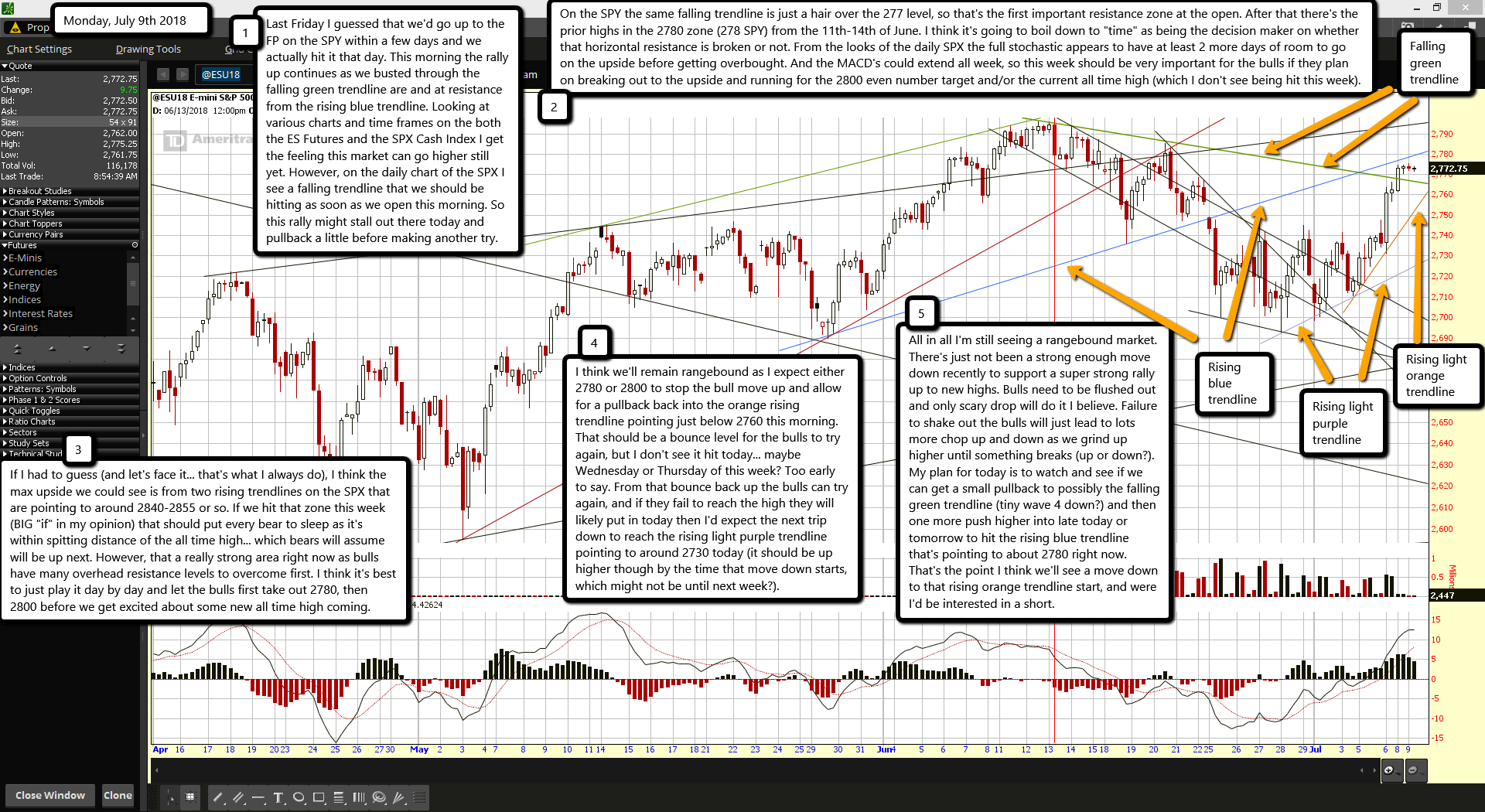 Last Friday I guessed that we'd go up to the FP on the SPY within a few days and we actually hit it that day. This morning the rally up continues as we busted through the falling green trendline are and at resistance from the rising blue trendline. Looking at various charts and time frames on the both the ES Futures and the SPX Cash Index I get the feeling this market can go higher still yet. However, on the daily chart of the SPX I see a falling trendline that we should be hitting as soon as we open this morning. So this rally might stall out there today and pullback a little before making another try.

On the SPY the same falling trendline is just a hair over the 277 level, so that's the first important resistance zone at the open. After that there's the prior highs in the 2780 zone (278 SPY) from the 11th-14th of June. I think it's going to boil down to "time" as being the decision maker on whether that horizontal resistance is broken or not. From the looks of the daily SPX the full stochastic appears to have at least 2 more days of room to go on the upside before getting overbought. And the MACD's could extend all week, so this week should be very important for the bulls if they plan on breaking out to the upside and running for the 2800 even number target and/or the current all time high (which I don't see being hit this week).

If I had to guess (and let's face it... that's what I always do), I think the max upside we could see is from two rising trendlines on the SPX that are pointing to around 2840-2855 or so. If we hit that zone this week (BIG "if" in my opinion) that should put every bear to sleep as it's within spitting distance of the all time high... which bears will assume will be up next. However, that a really strong area right now as bulls have many overhead resistance levels to overcome first. I think it's best to just play it day by day and let the bulls first take out 2780, then 2800 before we get excited about some new all time high coming.

I think we'll remain rangebound as I expect either 2780 or 2800 to stop the bull move up and allow for a pullback back into the orange rising trendline pointing just below 2760 this morning. That should be a bounce level for the bulls to try again, but I don't see it hit today... maybe Wednesday or Thursday of this week? Too early to say. From that bounce back up the bulls can try again, and if they fail to reach the high they will likely put in today then I'd expect the next trip down to reach the rising light purple trendline pointing to around 2730 today (it should be up higher though by the time that move down starts, which might not be until next week?).

All in all I'm still seeing a rangebound market. There's just not been a strong enough move down recently to support a super strong rally up to new highs. Bulls need to be flushed out and only scary drop will do it I believe. Failure to shake out the bulls will just lead to lots more chop up and down as we grind up higher until something breaks (up or down?). My plan for today is to watch and see if we can get a small pullback to possibly the falling green trendline (tiny wave 4 down?) and then one more push higher into late today or tomorrow to hit the rising blue trendline that's pointing to about 2780 right now. That's the point I think we'll see a move down to that rising orange trendline start, and were I'd be interested in a short.