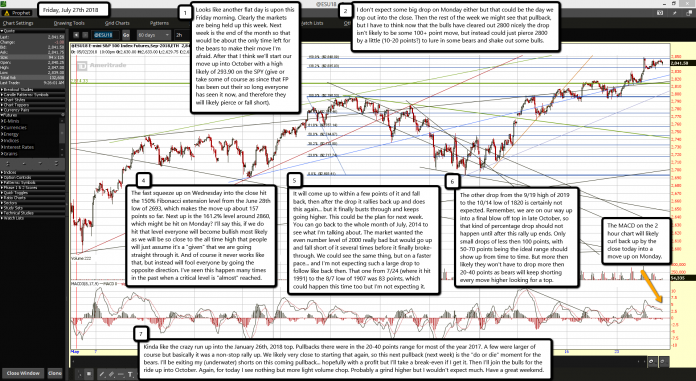 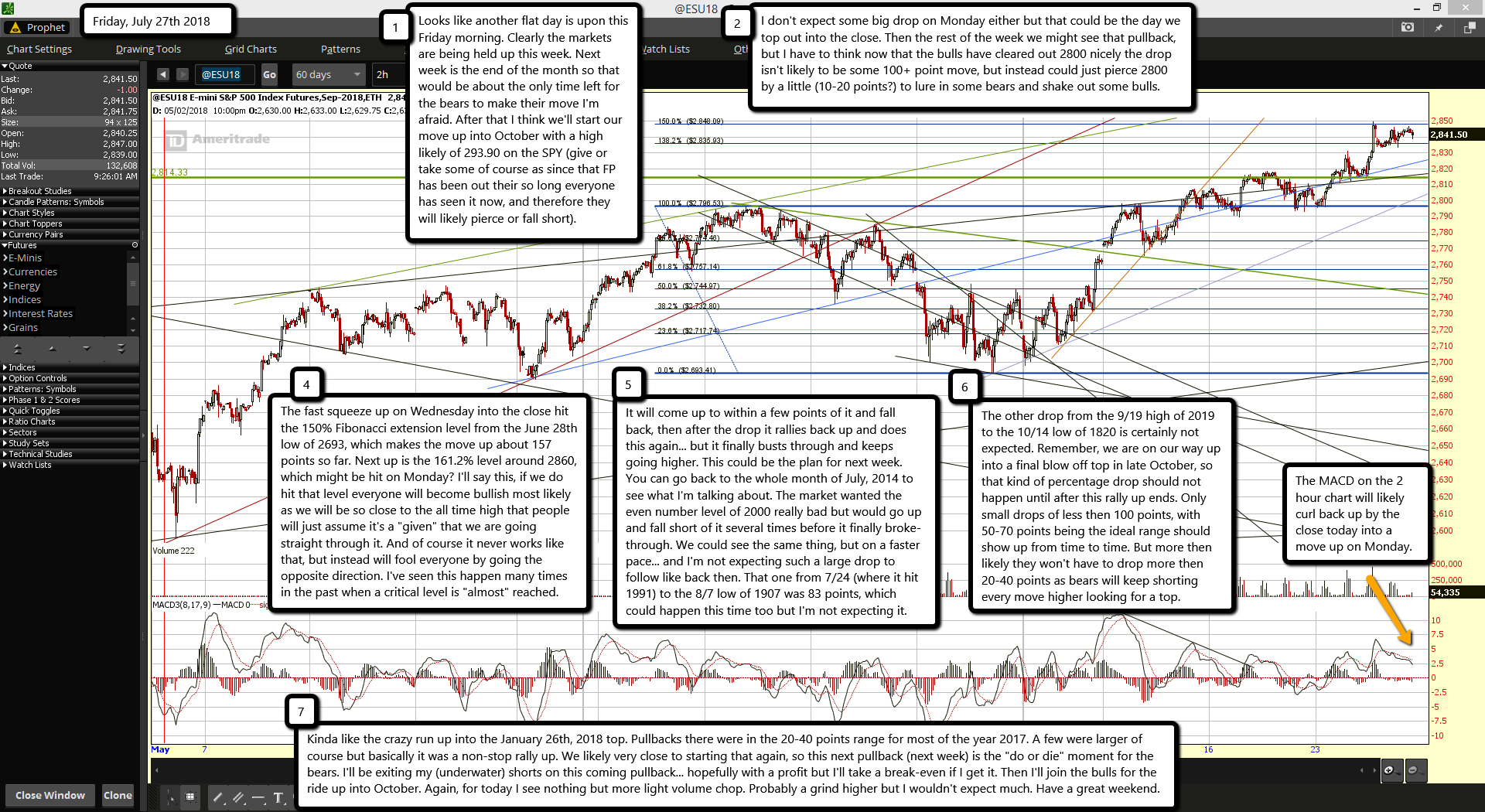 Looks like another flat day is upon this Friday morning. Clearly the markets are being held up this week. Next week is the end of the month so that would be about the only time left for the bears to make their move I'm afraid. After that I think we'll start our move up into October with a high likely of 293.90 on the SPY (give or take some of course as since that FP has been out their so long everyone has seen it now, and therefore they will likely pierce or fall short).

I don't expect some big drop on Monday either but that could be the day we top out into the close. Then the rest of the week we might see that pullback, but I have to think now that the bulls have cleared out 2800 nicely the drop isn't likely to be some 100+ point move, but instead could just pierce 2800 by a little (10-20 points?) to lure in some bears and shake out some bulls.

The fast squeeze up on Wednesday into the close hit the 150% Fibonacci extension level from the June 28th low of 2693, which makes the move up about 157 points so far. Next up is the 161.2% level around 2860, which might be hit on Monday? I'll say this, if we do hit that level everyone will become bullish most likely as we will be so close to the all time high that people will just assume it's a "given" that we are going straight through it. And of course it never works like that, but instead will fool everyone by going the opposite direction. I've seen this happen many times in the past when a critical level is "almost" reached.

It will come up to within a few points of it and fall back, then after the drop it rallies back up and does this again... but it finally busts through and keeps going higher. This could be the plan for next week. You can go back to the whole month of July, 2014 to see what I'm talking about. The market wanted the even number level of 2000 really bad but would go up and fall short of it several times before it finally broke-through. We could see the same thing, but on a faster pace... and I'm not expecting such a large drop to follow like back then. That one from 7/24 (where it hit 1991) to the 8/7 low of 1907 was 83 points, which could happen this time too but I'm not expecting it.

The other drop from the 9/19 high of 2019 to the 10/14 low of 1820 is certainly not expected. Remember, we are on our way up into a final blow off top in late October, so that kind of percentage drop should not happen until after this rally up ends. Only small drops of less then 100 points, with 50-70 points being the ideal range should show up from time to time. But more then likely they won't have to drop more then 20-40 points as bears will keep shorting every move higher looking for a top.

Kinda like the crazy run up into the January 26th, 2018 top. Pullbacks there were in the 20-40 points range for most of the year 2017. A few were larger of course but basically it was a non-stop rally up. We likely very close to starting that again, so this next pullback (next week) is the "do or die" moment for the bears. I'll be exiting my (underwater) shorts on this coming pullback... hopefully with a profit but I'll take a break-even if I get it. Then I'll join the bulls for the ride up into October. Again, for today I see nothing but more light volume chop. Probably a grind higher but I wouldn't expect much. Have a great weekend.