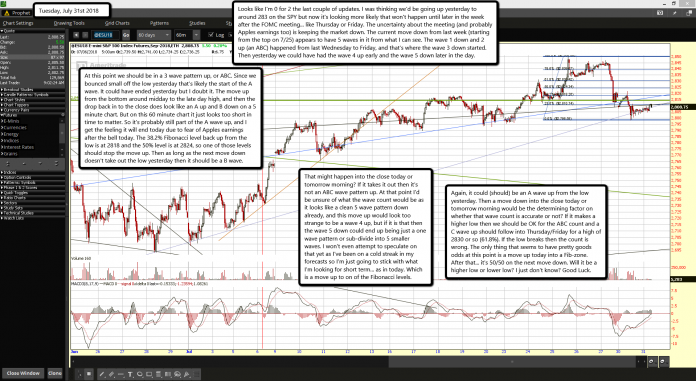 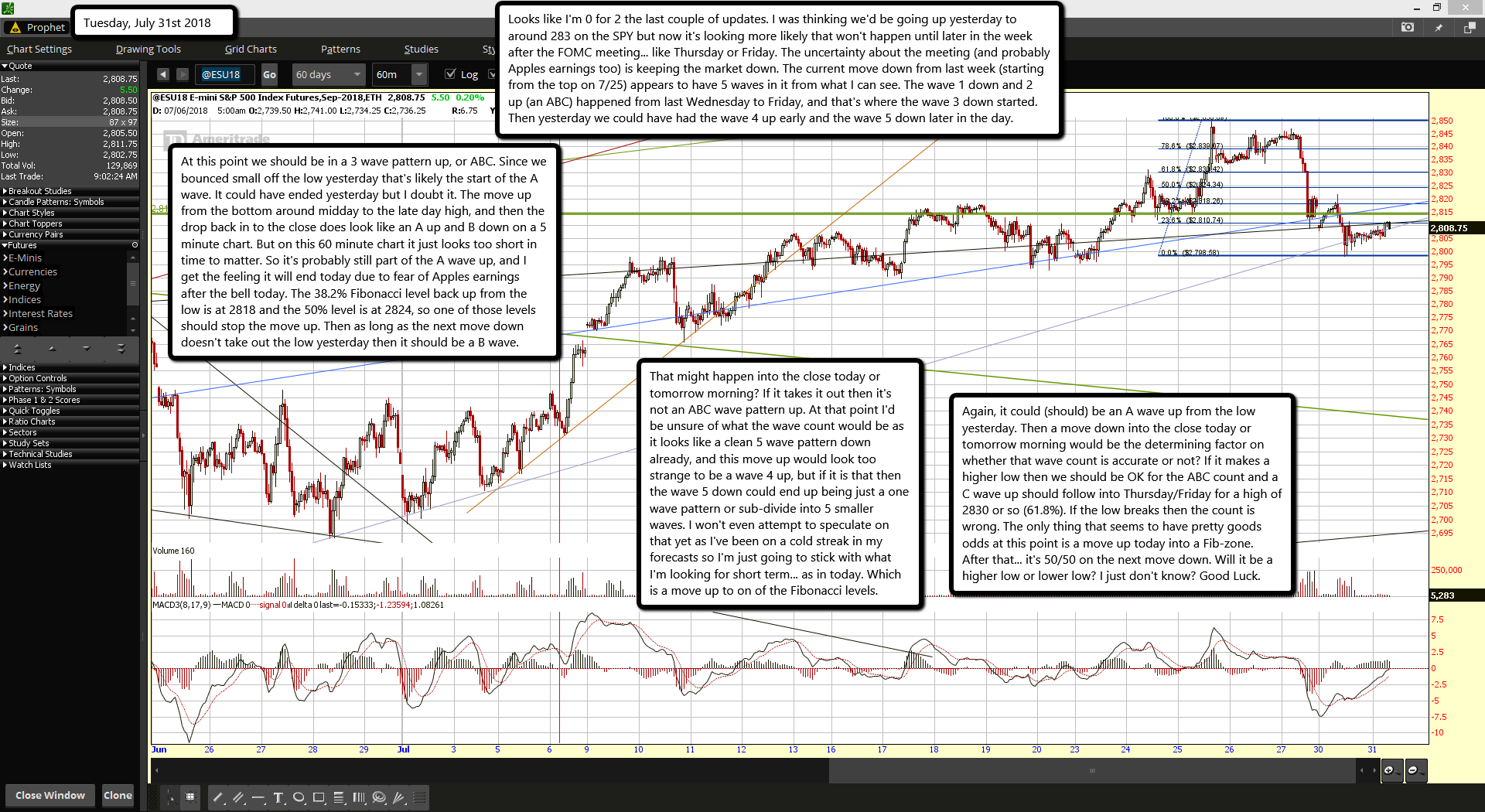 Looks like I'm 0 for 2 the last couple of updates. I was thinking we'd be going up yesterday to around 283 on the SPY but now it's looking more likely that won't happen until later in the week after the FOMC meeting... like Thursday or Friday. The uncertainty about the meeting (and probably Apples earnings too) is keeping the market down. The current move down from last week (starting from the top on 7/25) appears to have 5 waves in it from what I can see. The wave 1 down and 2 up (an ABC) happened from last Wednesday to Friday, and that's where the wave 3 down started. Then yesterday we could have had the wave 4 up early and the wave 5 down later in the day.

At this point we should be in a 3 wave pattern up, or ABC. Since we bounced small off the low yesterday that's likely the start of the A wave. It could have ended yesterday but I doubt it. The move up from the bottom around midday to the late day high, and then the drop back in to the close does look like an A up and B down on a 5 minute chart. But on this 60 minute chart it just looks too short in time to matter. So it's probably still part of the A wave up, and I get the feeling it will end today due to fear of Apples earnings after the bell today. The 38.2% Fibonacci level back up from the low is at 2818 and the 50% level is at 2824, so one of those levels should stop the move up. Then as long as the next move down doesn't take out the low yesterday then it should be a B wave.

That might happen into the close today or tomorrow morning? If it takes it out then it's not an ABC wave pattern up. At that point I'd be unsure of what the wave count would be as it looks like a clean 5 wave pattern down already, and this move up would look too strange to be a wave 4 up, but if it is that then the wave 5 down could end up being just a one wave pattern or sub-divide into 5 smaller waves. I won't even attempt to speculate on that yet as I've been on a cold streak in my forecasts so I'm just going to stick with what I'm looking for short term... as in today. Which is a move up to on of the Fibonacci levels.

Again, it could (should) be an A wave up from the low yesterday. Then a move down into the close today or tomorrow morning would be the determining factor on whether that wave count is accurate or not? If it makes a higher low then we should be OK for the ABC count and a C wave up should follow into Thursday/Friday for a high of 2830 or so (61.8%). If the low breaks then the count is wrong. The only thing that seems to have pretty goods odds at this point is a move up today into a Fib-zone. After that... it's 50/50 on the next move down. Will it be a higher low or lower low? I just don't know? Good Luck.