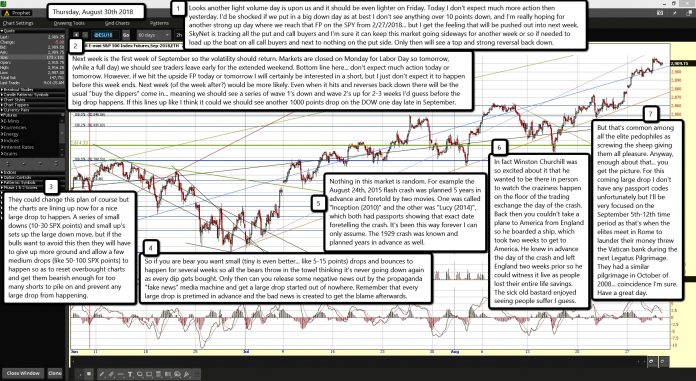 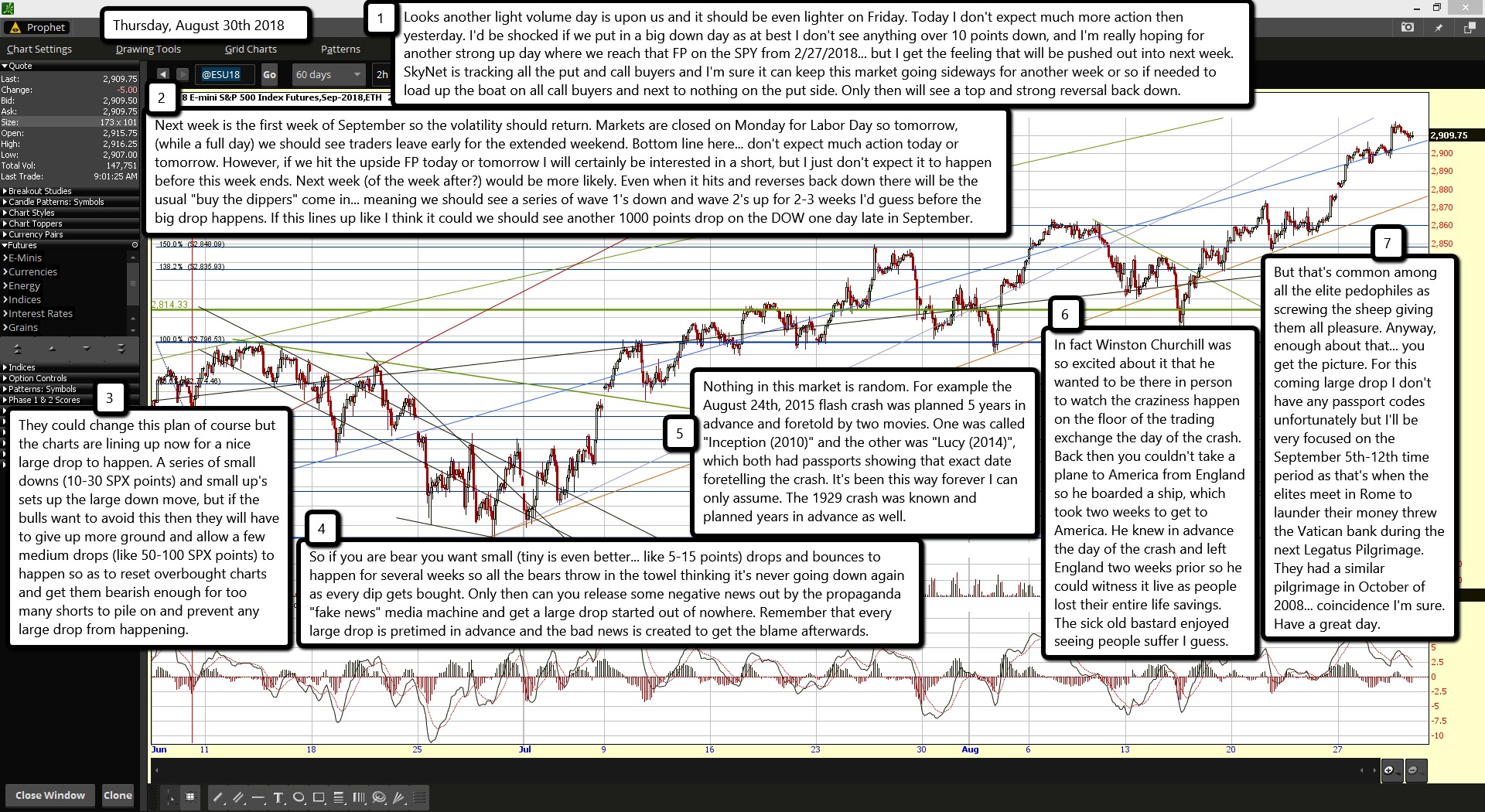 Looks another light volume day is upon us and it should be even lighter on Friday. Today I don't expect much more action then yesterday. I'd be shocked if we put in a big down day as at best I don't see anything over 10 points down, and I'm really hoping for another strong up day where we reach that FP on the SPY from 2/27/2018... but I get the feeling that will be pushed out into next week. SkyNet is tracking all the put and call buyers and I'm sure it can keep this market going sideways for another week or so if needed to load up the boat on all call buyers and next to nothing on the put side. Only then will see a top and strong reversal back down.

Next week is the first week of September so the volatility should return. Markets are closed on Monday for Labor Day so tomorrow, (while a full day) we should see traders leave early for the extended weekend. Bottom line here... don't expect much action today or tomorrow. However, if we hit the upside FP today or tomorrow I will certainly be interested in a short, but I just don't expect it to happen before this week ends. Next week (of the week after?) would be more likely. Even when it hits and reverses back down there will be the usual "buy the dippers" come in... meaning we should see a series of wave 1's down and wave 2's up for 2-3 weeks I'd guess before the big drop happens. If this lines up like I think it could we should see another 1000 points drop on the DOW one day late in September.

They could change this plan of course but the charts are lining up now for a nice large drop to happen. A series of small downs (10-30 SPX points) and small up's sets up the large down move, but if the bulls want to avoid this then they will have to give up more ground and allow a few medium drops (like 50-100 SPX points) to happen so as to reset overbought charts and get them bearish enough for too many shorts to pile on and prevent any large drop from happening.

So if you are bear you want small (tiny is even better... like 5-15 points) drops and bounces to happen for several weeks so all the bears throw in the towel thinking it's never going down again as every dip gets bought. Only then can you release some negative news out by the propaganda "fake news" media machine and get a large drop started out of nowhere. Remember that every large drop is pretimed in advance and the bad news is created to get the blame afterwards.

Nothing in this market is random. For example the August 24th, 2015 flash crash was planned 5 years in advance and foretold by two movies. One was called "Inception (2010)" and the other was "Lucy (2014)", which both had passports showing that exact date foretelling the crash. It's been this way forever I can only assume. The 1929 crash was known and planned years in advance as well.

In fact Winston Churchill was so excited about it that he wanted to be there in person to watch the craziness happen on the floor of the trading exchange the day of the crash. Back then you couldn't take a plane to America from England so he boarded a ship, which took two weeks to get to America. He knew in advance the day of the crash and left England two weeks prior so he could witness it live as people lost their entire life savings. The sick old bastard enjoyed seeing people suffer I guess.

But that's common among all the elite pedophiles as screwing the sheep giving them all pleasure. Anyway, enough about that... you get the picture. For this coming large drop I don't have any passport codes unfortunately but I'll be very focused on the September 5th-12th time period as that's when the elites meet in Rome to launder their money threw the Vatican bank during the next Legatus Pilgrimage. They had a similar pilgrimage in October of 2008... coincidence I'm sure. Have a great day.