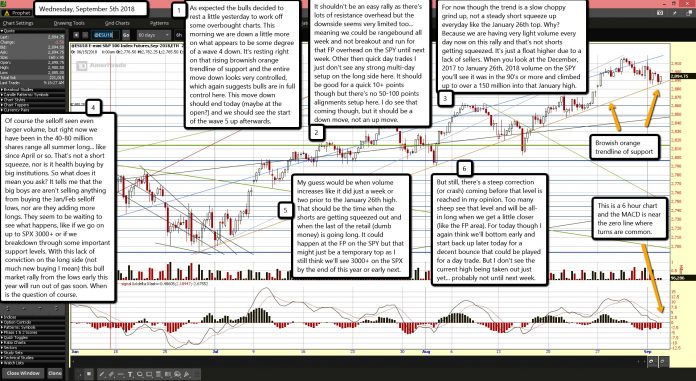 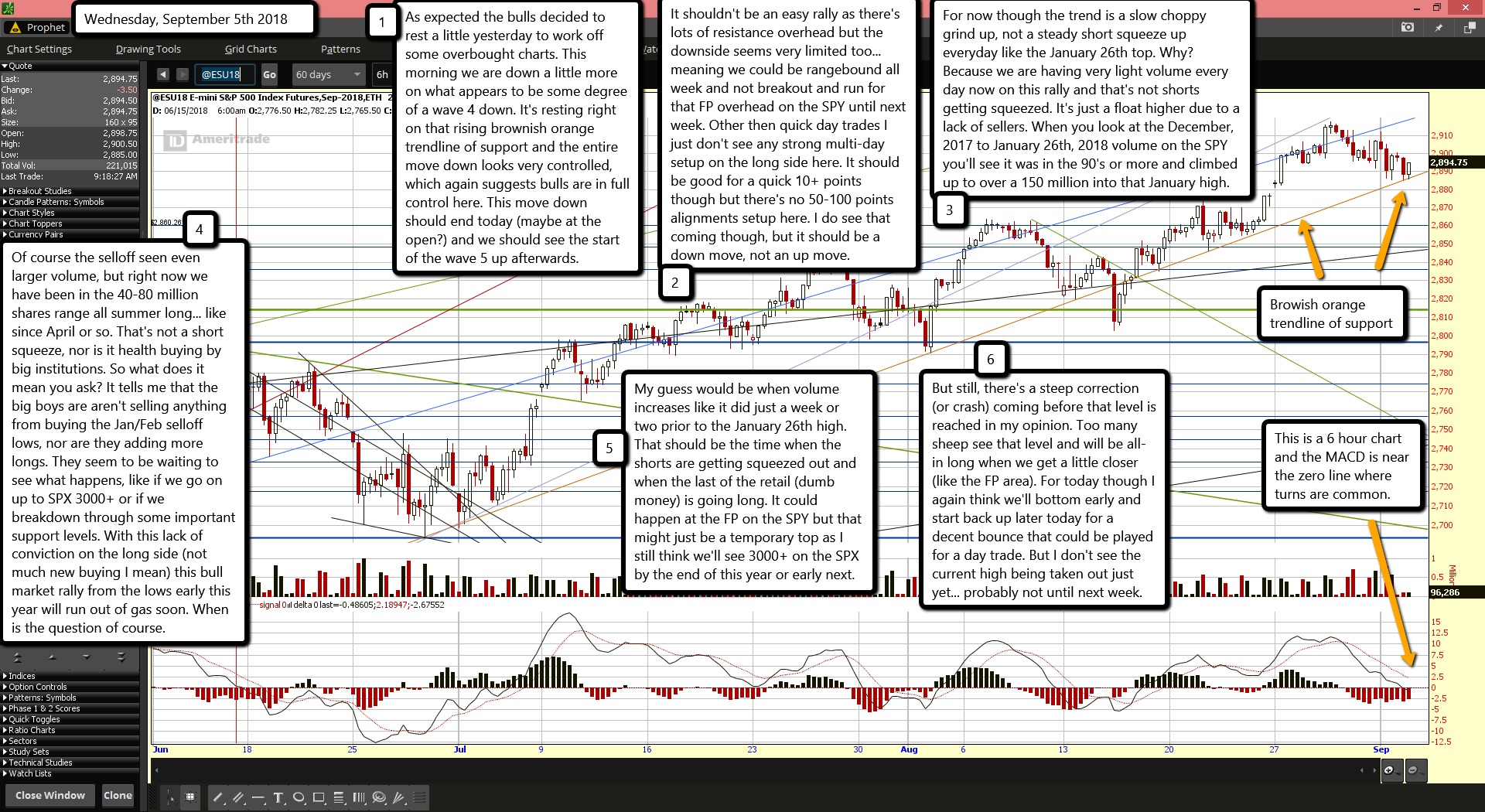 As expected the bulls decided to rest a little yesterday to work off some overbought charts. This morning we are down a little more on what appears to be some degree of a wave 4 down. It's resting right on that rising brownish orange trendline of support and the entire move down looks very controlled, which again suggests bulls are in full control here. This move down should end today (maybe at the open?) and we should see the start of the wave 5 up afterwards.

It shouldn't be an easy rally as there's lots of resistance overhead but the downside seems very limited too... meaning we could be rangebound all week and not breakout and run for that FP overhead on the SPY until next week. Other then quick day trades I just don't see any strong multi-day setup on the long side here. It should be good for a quick 10+ points though but there's no 50-100 points alignments setup here. I do see that coming though, but it should be a down move, not an up move.

For now though the trend is a slow choppy grind up, not a steady short squeeze up everyday like the January 26th top. Why? Because we are having very light volume every day now on this rally and that's not shorts getting squeezed. It's just a float higher due to a lack of sellers. When you look at the December, 2017 to January 26th, 2018 volume on the SPY you'll see it was in the 90's or more and climbed up to over a 150 million into that January high.

Of course the selloff seen even larger volume, but right now we have been in the 40-80 million shares range all summer long... like since April or so. That's not a short squeeze, nor is it health buying by big institutions. So what does it mean you ask? It tells me that the big boys are aren't selling anything from buying the Jan/Feb selloff lows, nor are they adding more longs. They seem to be waiting to see what happens, like if we go on up to SPX 3000+ or if we breakdown through some important support levels. With this lack of conviction on the long side (not much new buying I mean) this bull market rally from the lows early this year will run out of gas soon. When is the question of course.

My guess would be when volume increases like it did just a week or two prior to the January 26th high. That should be the time when the shorts are getting squeezed out and when the last of the retail (dumb money) is going long. It could happen at the FP on the SPY but that might just be a temporary top as I still think we'll see 3000+ on the SPX by the end of this year or early next.

But still, there's a steep correction (or crash) coming before that level is reached in my opinion. Too many sheep see that level and will be all-in long when we get a little closer (like the FP area). For today though I again think we'll bottom early and start back up later today for a decent bounce that could be played for a day trade. But I don't see the current high being taken out just yet... probably not until next week.