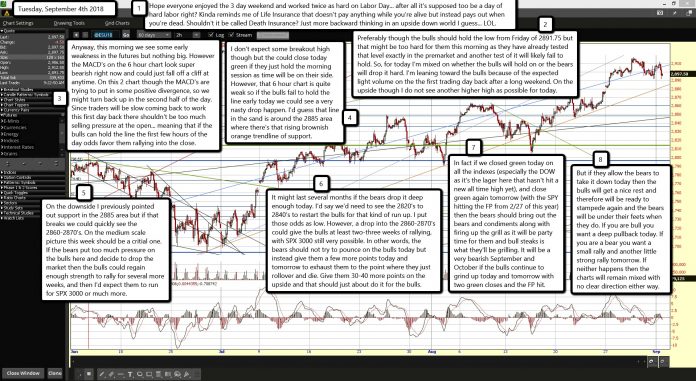 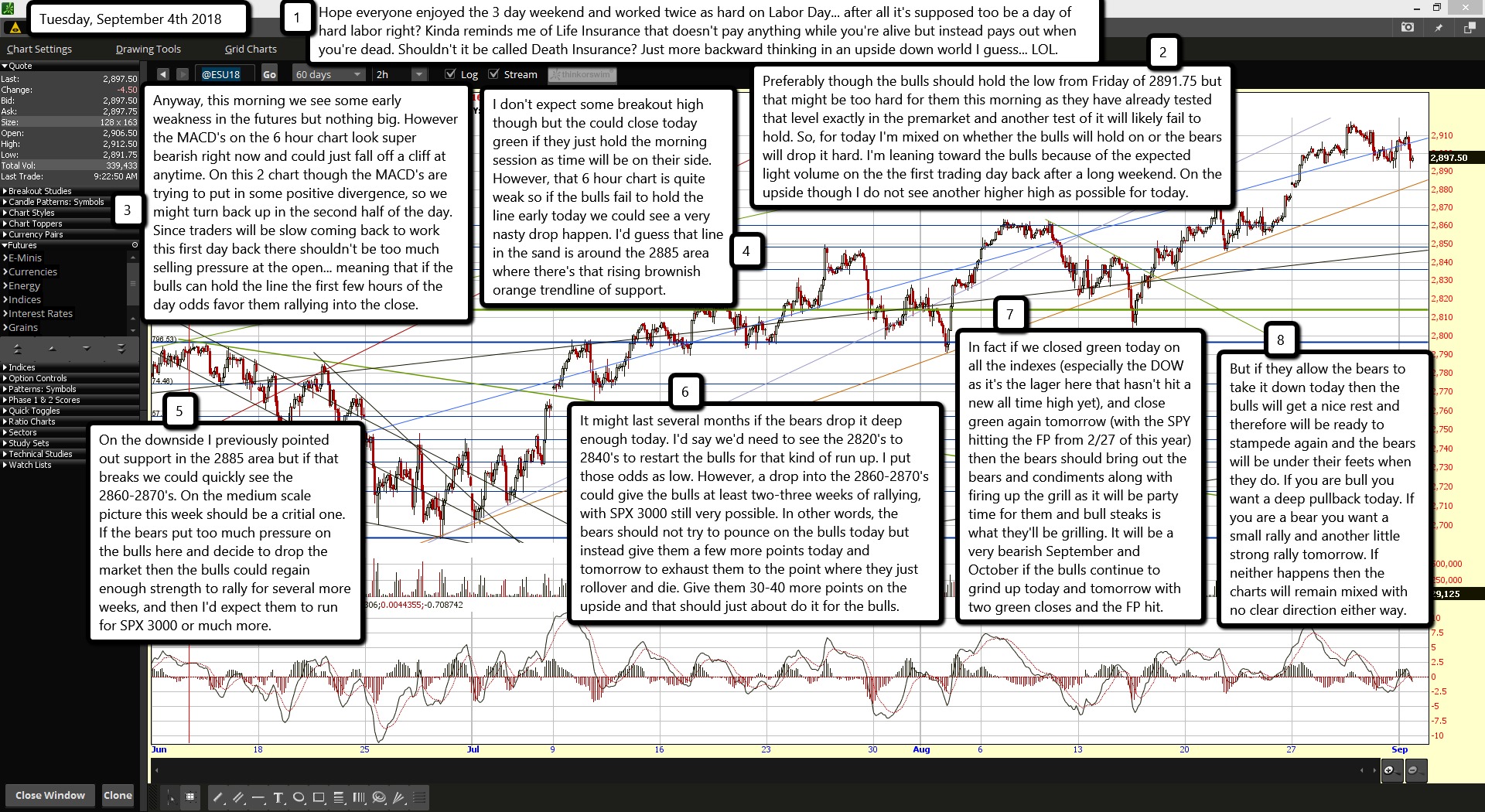 Hope everyone enjoyed the 3 day weekend and worked twice as hard on Labor Day... after all it's supposed too be a day of hard labor right? Kinda reminds me of Life Insurance that doesn't pay anything while you're alive but instead pays out when you're dead. Shouldn't it be called Death Insurance? Just more backward thinking in an upside down world I guess... LOL.

Anyway, this morning we see some early weakness in the futures but nothing big. However the MACD's on the 6 hour chart look super bearish right now and could just fall off a cliff at anytime. On this 2 chart though the MACD's are trying to put in some positive divergence, so we might turn back up in the second half of the day. Since traders will be slow coming back to work this first day back there shouldn't be too much selling pressure at the open... meaning that if the bulls can hold the line the first few hours of the day odds favor them rallying into the close.

I don't expect some breakout high though but the could close today green if they just hold the morning session as time will be on their side. However, that 6 hour chart is quite weak so if the bulls fail to hold the line early today we could see a very nasty drop happen. I'd guess that line in the sand is around the 2885 area where there's that rising brownish orange trendline of support.

Preferably though the bulls should hold the low from Friday of 2891.75 but that might be too hard for them this morning as they have already tested that level exactly in the premarket and another test of it will likely fail to hold. So, for today I'm mixed on whether the bulls will hold on or the bears will drop it hard. I'm leaning toward the bulls because of the expected light volume on the the first trading day back after a long weekend. On the upside though I do not see another higher high as possible for today.

On the downside I previously pointed out support in the 2885 area but if that breaks we could quickly see the 2860-2870's. On the medium scale picture this week should be a critial one. If the bears put too much pressure on the bulls here and decide to drop the market then the bulls could regain enough strength to rally for several more weeks, and then I'd expect them to run for SPX 3000 or much more.

It might last several months if the bears drop it deep enough today. I'd say we'd need to see the 2820's to 2840's to restart the bulls for that kind of run up. I put those odds as low. However, a drop into the 2860-2870's could give the bulls at least two-three weeks of rallying, with SPX 3000 still very possible. In other words, the bears should not try to pounce on the bulls today but instead give them a few more points today and tomorrow to exhaust them to the point where they just rollover and die. Give them 30-40 more points on the upside and that should just about do it for the bulls.

In fact if we closed green today on all the indexes (especially the DOW as it's the lager here that hasn't hit a new all time high yet), and close green again tomorrow (with the SPY hitting the FP from 2/27 of this year) then the bears should bring out the bears and condiments along with firing up the grill as it will be party time for them and bull steaks is what they'll be grilling. It will be a very bearish September and October if the bulls continue to grind up today and tomorrow with two green closes and the FP hit.

But if they allow the bears to take it down today then the bulls will get a nice rest and therefore will be ready to stampede again and the bears will be under their feets when they do. If you are bull you want a deep pullback today. If you are a bear you want a small rally and another little strong rally tomorrow. If neither happens then the charts will remain mixed with no clear direction either way.