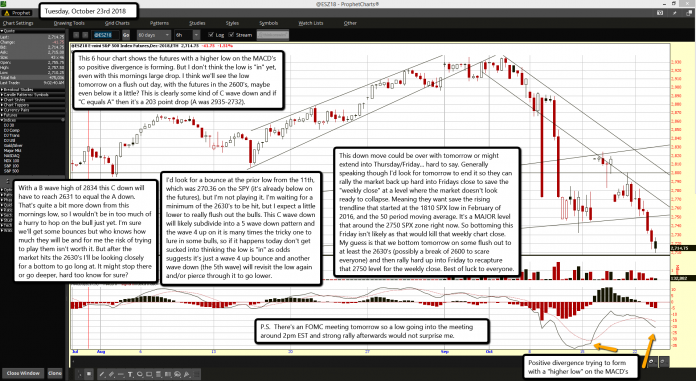 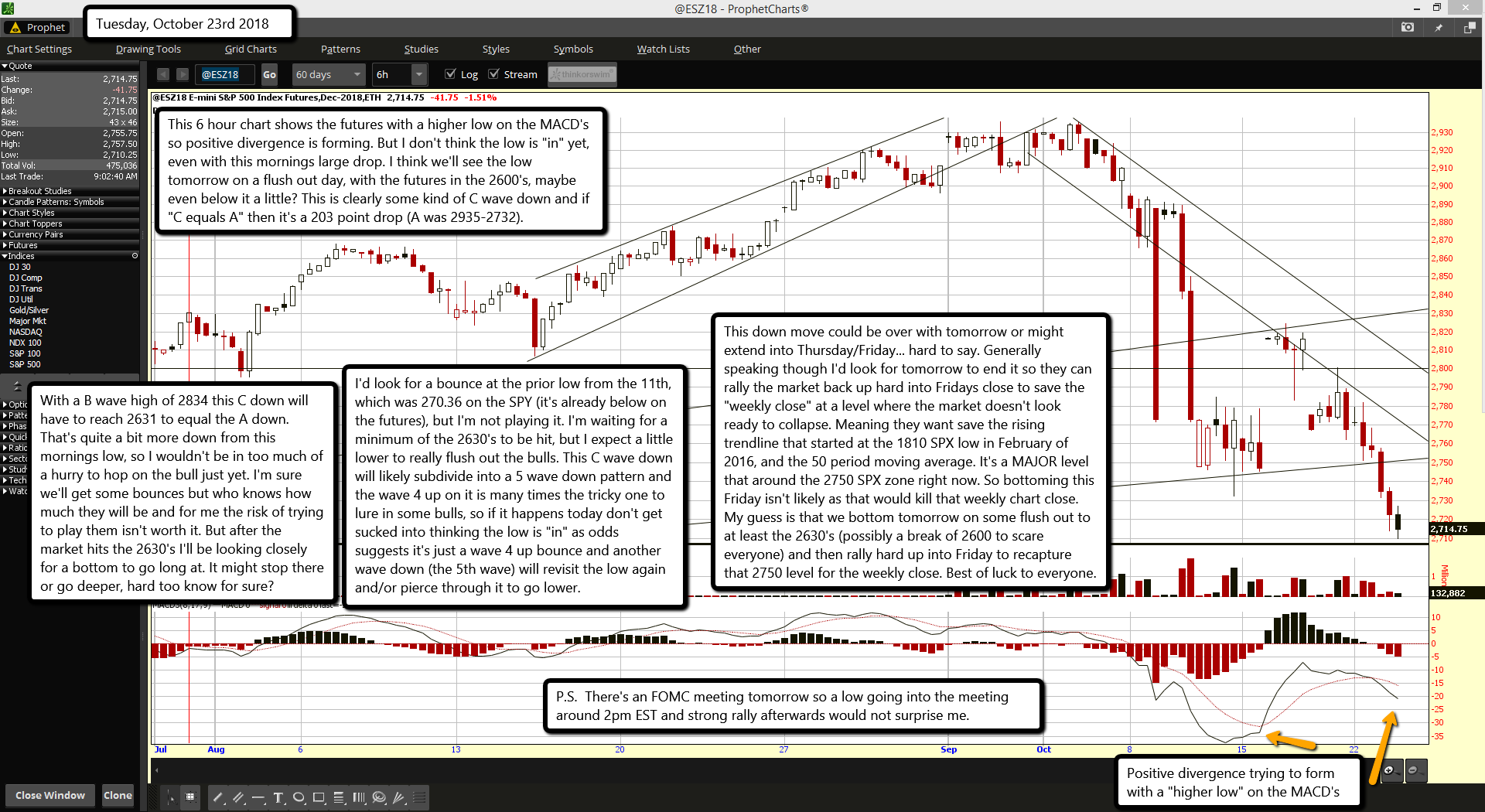 This 6 hour chart shows the futures with a higher low on the MACD's so positive divergence is forming. But I don't think the low is "in" yet, even with this mornings large drop. I think we'll see the low tomorrow on a flush out day, with the futures in the 2600's, maybe even below it a little? This is clearly some kind of C wave down and if "C equals A" then it's a 203 point drop (A was 2935-2732).

With a B wave high of 2834 this C down will have to reach 2631 to equal the A down. That's quite a bit more down from this mornings low, so I wouldn't be in too much of a hurry to hop on the bull just yet. I'm sure we'll get some bounces but who knows how much they will be and for me the risk of trying to play them isn't worth it. But after the market hits the 2630's I'll be looking closely for a bottom to go long at. It might stop there or go deeper, hard too know for sure?

I'd look for a bounce at the prior low from the 11th, which was 270.36 on the SPY (it's already below on the futures), but I'm not playing it. I'm waiting for a minimum of the 2630's to be hit, but I expect a little lower to really flush out the bulls. This C wave down will likely subdivide into a 5 wave down pattern and the wave 4 up on it is many times the tricky one to lure in some bulls, so if it happens today don't get sucked into thinking the low is "in" as odds suggests it's just a wave 4 up bounce and another wave down (the 5th wave) will revisit the low again and/or pierce through it to go lower.

This down move could be over with tomorrow or might extend into Thursday/Friday... hard to say. Generally speaking though I'd look for tomorrow to end it so they can rally the market back up hard into Fridays close to save the "weekly close" at a level where the market doesn't look ready to collapse. Meaning they want save the rising trendline that started at the 1810 SPX low in February of 2016, and the 50 period moving average. It's a MAJOR level that around the 2750 SPX zone right now. So bottoming this Friday isn't likely as that would kill that weekly chart close. My guess is that we bottom tomorrow on some flush out to at least the 2630's (possibly a break of 2600 to scare everyone) and then rally hard up into Friday to recapture that 2750 level for the weekly close. Best of luck to everyone.

P.S.  There's an FOMC meeting tomorrow so a low going into the meeting around 2pm EST and strong rally afterwards would not surprise me.

CORRECTION:  There's no meeting this week.  Next meeting is November 7-8th.