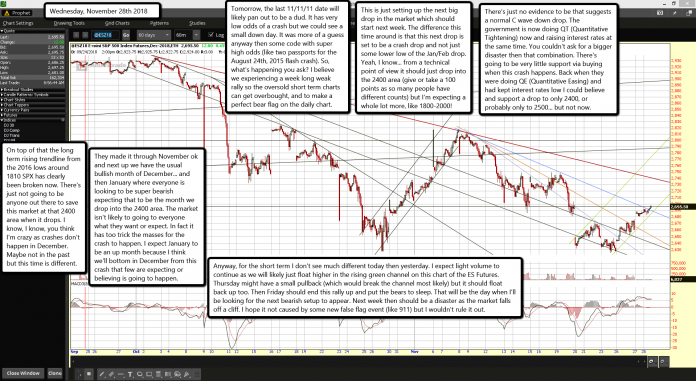 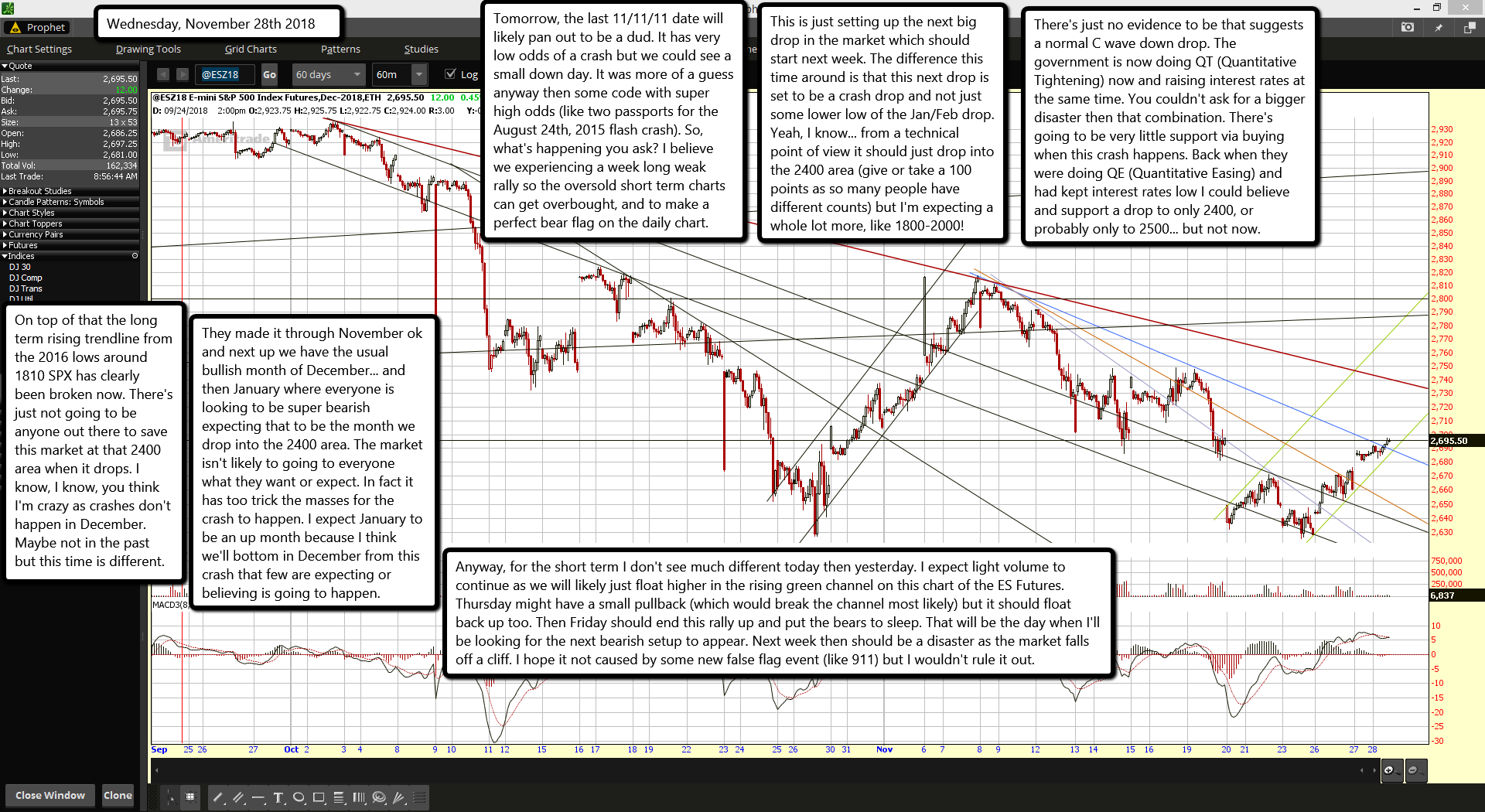 Tomorrow, the last 11/11/11 date will likely pan out to be a dud. It has very low odds of a crash but we could see a small down day. It was more of a guess anyway then some code with super high odds (like two passports for the August 24th, 2015 flash crash). So, what's happening you ask? I believe we experiencing a week long weak rally so the oversold short term charts can get overbought, and to make a perfect bear flag on the daily chart.

This is just setting up the next big drop in the market which should start next week. The difference this time around is that this next drop is set to be a crash drop and not just some lower low of the Jan/Feb drop. Yeah, I know... from a technical point of view it should just drop into the 2400 area (give or take a 100 points as so many people have different counts) but I'm expecting a whole lot more, like 1800-2000!

There's just no evidence to be that suggests a normal C wave down drop. The government is now doing QT (Quantitative Tightening) now and raising interest rates at the same time. You couldn't ask for a bigger disaster then that combination. There's going to be very little support via buying when this crash happens. Back when they were doing QE (Quantitative Easing) and had kept interest rates low I could believe and support a drop to only 2400, or probably only to 2500... but not now.

On top of that the long term rising trendline from the 2016 lows around 1810 SPX has clearly been broken now. There's just not going to be anyone out there to save this market at that 2400 area when it drops. I know, I know, you think I'm crazy as crashes don't happen in December. Maybe not in the past but this time is different.

They made it through November ok and next up we have the usual bullish month of December... and then January where everyone is looking to be super bearish expecting that to be the month we drop into the 2400 area. The market isn't likely to going to everyone what they want or expect. In fact it has too trick the masses for the crash to happen. I expect January to be an up month because I think we'll bottom in December from this crash that few are expecting or believing is going to happen.

Anyway, for the short term I don't see much different today then yesterday. I expect light volume to continue as we will likely just float higher in the rising green channel on this chart of the ES Futures. Thursday might have a small pullback (which would break the channel most likely) but it should float back up too. Then Friday should end this rally up and put the bears to sleep. That will be the day when I'll be looking for the next bearish setup to appear. Next week then should be a disaster as the market falls off a cliff. I hope it not caused by some new false flag event (like 911) but I wouldn't rule it out.