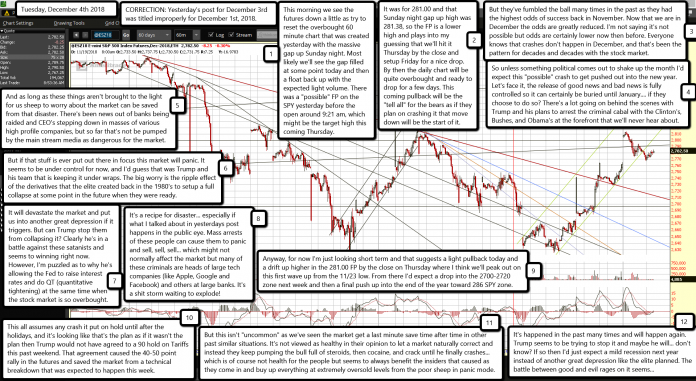 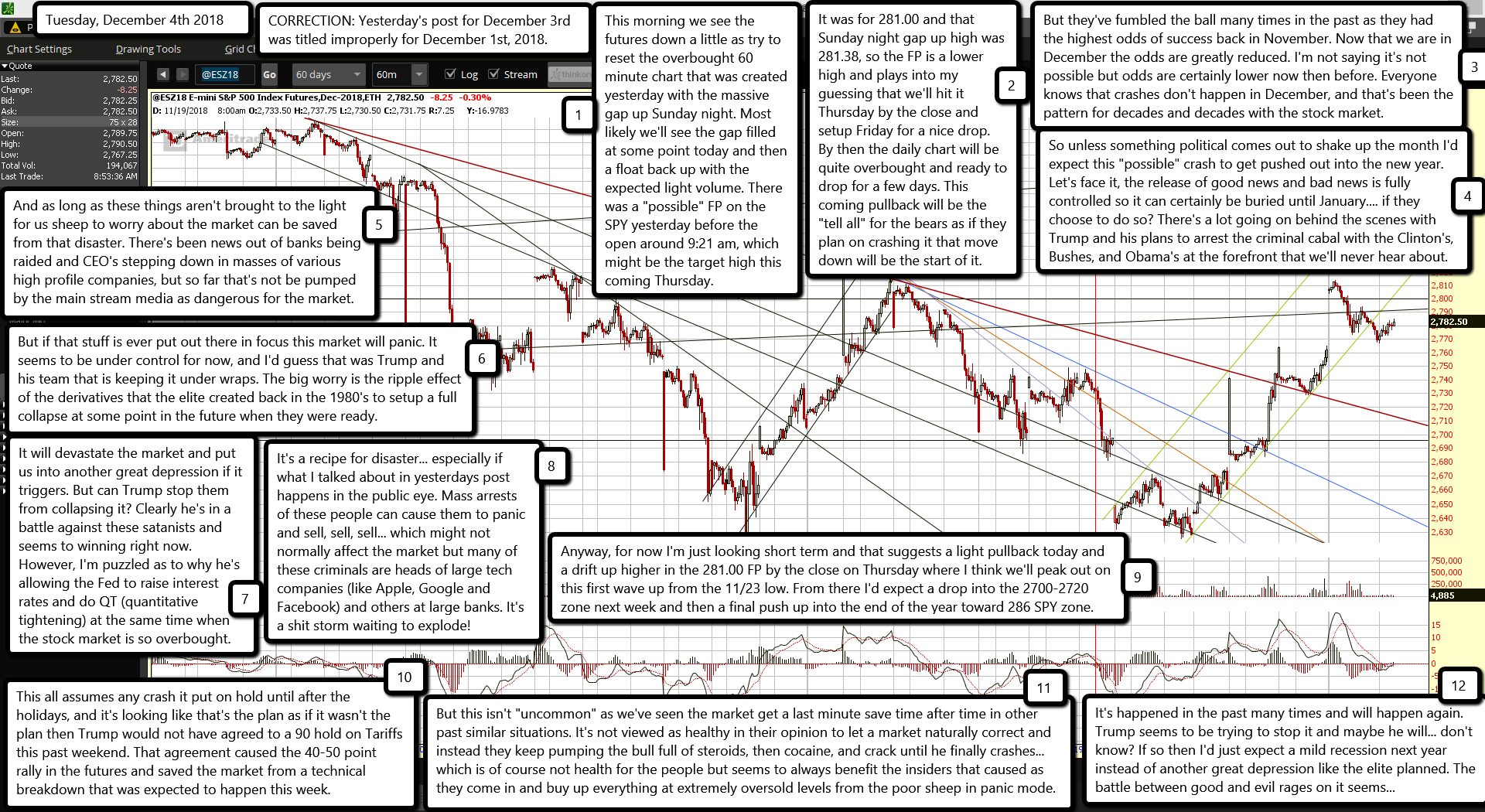 This morning we see the futures down a little as try to reset the overbought 60 minute chart that was created yesterday with the massive gap up Sunday night. Most likely we'll see the gap filled at some point today and then a float back up with the expected light volume. There was a "possible" FP on the SPY yesterday before the open around 9:21 am, which might be the target high this coming Thursday.

It was for 281.00 and that Sunday night gap up high was 281.38, so the FP is a lower high and plays into my guessing that we'll hit it Thursday by the close and setup Friday for a nice drop. By then the daily chart will be quite overbought and ready to drop for a few days. This coming pullback will be the "tell all" for the bears as if they plan on crashing it that move down will be the start of it.

But they've fumbled the ball many times in the past as they had the highest odds of success back in November. Now that we are in December the odds are greatly reduced. I'm not saying it's not possible but odds are certainly lower now then before. Everyone knows that crashes don't happen in December, and that's been the pattern for decades and decades with the stock market.

So unless something political comes out to shake up the month I'd expect this "possible" crash to get pushed out into the new year. Let's face it, the release of good news and bad news is fully controlled so it can certainly be buried until January.... if they choose to do so? There's a lot going on behind the scenes with Trump and his plans to arrest the criminal cabal with the Clinton's, Bushes, and Obama's at the forefront that we'll never hear about.

And as long as these things aren't brought to the light for us sheep to worry about the market can be saved from that disaster. There's been news out of banks being raided and CEO's stepping down in masses of various high profile companies, but so far that's not be pumped by the main stream media as dangerous for the market.

But if that stuff is ever put out there in focus this market will panic. It seems to be under control for now, and I'd guess that was Trump and his team that is keeping it under wraps. The big worry is the ripple effect of the derivatives that the elite created back in the 1980's to setup a full collapse at some point in the future when they were ready.

It will devastate the market and put us into another great depression if it triggers. But can Trump stop them from collapsing it? Clearly he's in a battle against these satanists and seems to winning right now. However, I'm puzzled as to why he's allowing the Fed to raise interest rates and do QT (quantitative tightening) at the same time when the stock market is so overbought.

It's a recipe for disaster... especially if what I talked about in yesterdays post happens in the public eye. Mass arrests of these people can cause them to panic and sell, sell, sell... which might not normally affect the market but many of these criminals are heads of large tech companies (like Apple, Google and Facebook) and others at large banks. It's a shit storm waiting to explode!

Anyway, for now I'm just looking short term and that suggests a light pullback today and a drift up higher in the 281.00 FP by the close on Thursday where I think we'll peak out on this first wave up from the 11/23 low. From there I'd expect a drop into the 2700-2720 zone next week and then a final push up into the end of the year toward 286 SPY zone.

This all assumes any crash it put on hold until after the holidays, and it's looking like that's the plan as if it wasn't the plan then Trump would not have agreed to a 90 hold on Tariffs this past weekend. That agreement caused the 40-50 point rally in the futures and saved the market from a technical breakdown that was expected to happen this week.

But this isn't "uncommon" as we've seen the market get a last minute save time after time in other past similar situations. It's not viewed as healthy in their opinion to let a market naturally correct and instead they keep pumping the bull full of steroids, then cocaine, and crack until he finally crashes... which is of course not health for the people but seems to always benefit the insiders that caused as they come in and buy up everything at extremely oversold levels from the poor sheep in panic mode.

It's happened in the past many times and will happen again. Trump seems to be trying to stop it and maybe he will... don't know? If so then I'd just expect a mild recession next year instead of another great depression like the elite planned. The battle between good and evil rages on it seems...