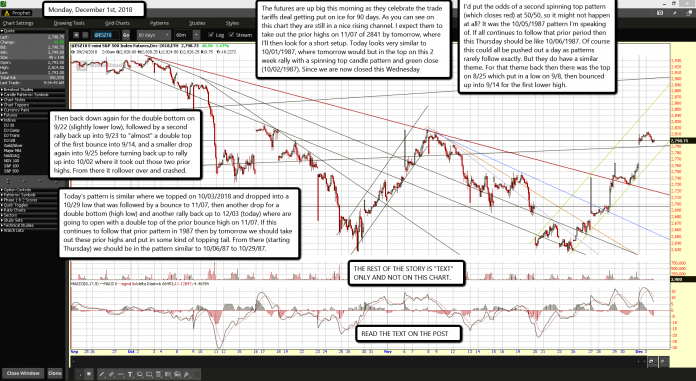 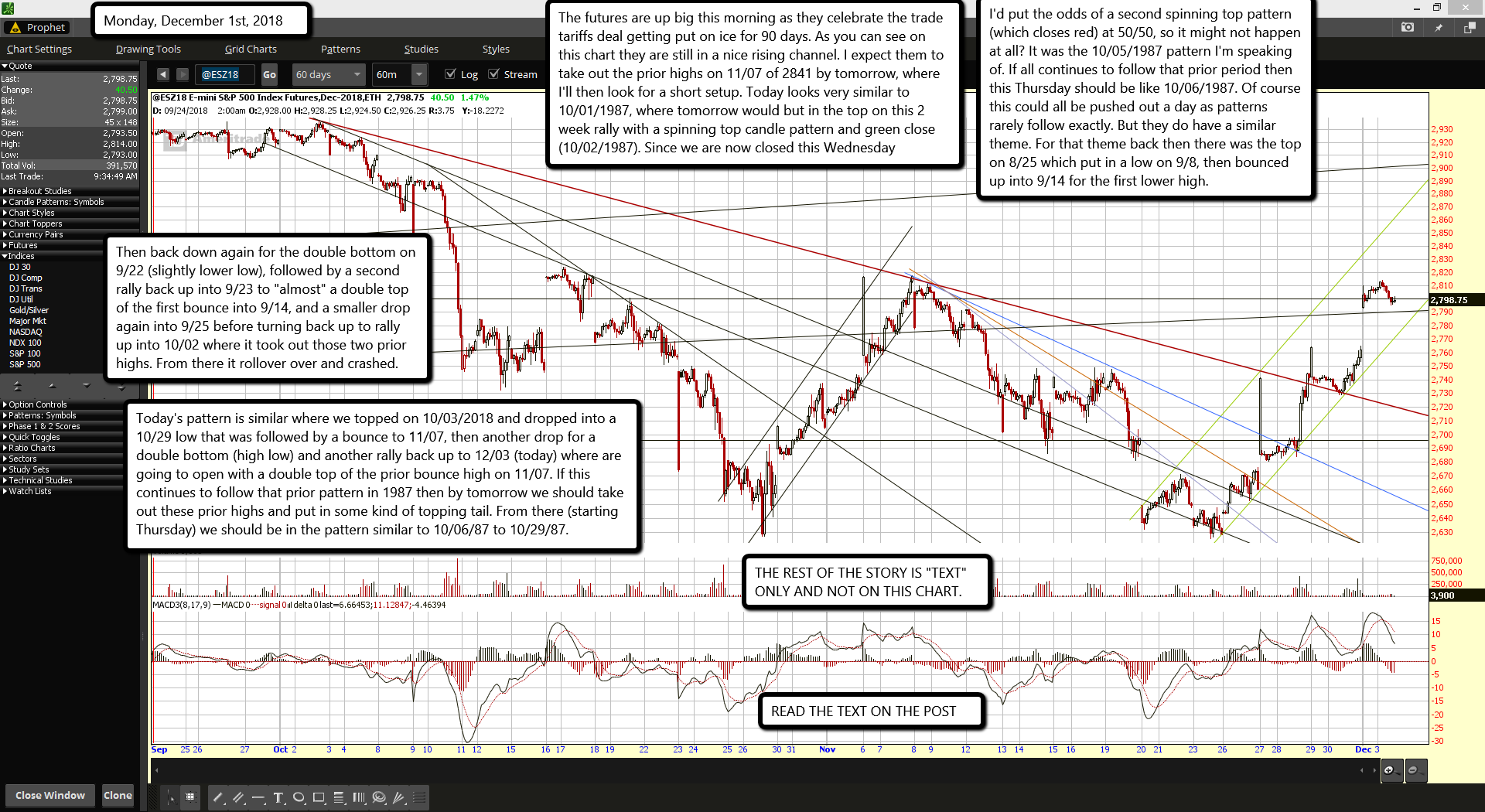 The futures are up big this morning as they celebrate the trade tariffs deal getting put on ice for 90 days. As you can see on this chart they are still in a nice rising channel. I expect them to take out the prior highs on 11/07 of 2841 by tomorrow, where I'll then look for a short setup. Today looks very similar to 10/01/1987, where tomorrow would but in the top on this 2 week rally with a spinning top candle pattern and green close (10/02/1987). Since we are now closed this Wednesday

I'd put the odds of a second spinning top pattern (which closes red) at 50/50, so it might not happen at all? It was the 10/05/1987 pattern I'm speaking of. If all continues to follow that prior period then this Thursday should be like 10/06/1987. Of course this could all be pushed out a day as patterns rarely follow exactly. But they do have a similar theme. For that theme back then there was the top on 8/25 which put in a low on 9/8, then bounced up into 9/14 for the first lower high.

Then back down again for the double bottom on 9/22 (slightly lower low), followed by a second rally back up into 9/23 to "almost" a double top of the first bounce into 9/14, and a smaller drop again into 9/25 before turning back up to rally up into 10/02 where it took out those two prior highs. From there it rollover over and crashed.

Today's pattern is similar where we topped on 10/03/2018 and dropped into a 10/29 low that was followed by a bounce to 11/07, then another drop for a double bottom (high low) and another rally back up to 12/03 (today) where are going to open with a double top of the prior bounce high on 11/07. If this continues to follow that prior pattern in 1987 then by tomorrow we should take out these prior highs and put in some kind of topping tail. From there (starting Thursday) we should be in the pattern similar to 10/06/87 to 10/29/87.

Yeah, there's never been a crash in December... I get it. But we've never had such a shake up in our government either. This "draining the swamp" that Trump is doing has never been done before in the history of our country. Trump plans to arrest a massive amount of criminals with Hillary at company at the top of his list. He's already cleaned up the Judges, and many banksters have stepped down to retire... as well as many top company CEO's. Why? Because they are dirty and they know it's just a matter of time before Trump finds them and those them behind bars where they belong.

The "shake up" that's about to come is going to be historic. What most people don't understand is that all these criminals had protection from the Clintons, Obama's, and Bushes. And the top dog of all of them was none other then George H. Bush... who just died. He protected them all by using his power to seal documents by making them classified. These are documents that Trump has likely had since he took office. The military has been collecting evidence for years now and was just waiting for the right president that could be trusted to enforce the law and go arrest these pedofiles and satanist.

Trump is just the man for the job, but there's one big problem... most of the evidence can't be used in court against them due to it being classified. That all changes now that Bush died as all of those document cease to maintain that "classified" status with his death.

This is why Trump was working so hard on clearing out the corrupt Supreme Court Judges as he's know he'll get to arrest these people after those documents are available... which they now are with the death of GHW Bush. It's a time to celebrate this Wednesday if you are a patriotic American as the death of that murdering satanist opens the path for Trump to do mass arrests now.

It's why he immediately scheduled the Senate to a meeting this Wednesday to start the process of showing the evidence so he can arrest them ASAP. You may not think this is going to affect the stock market but I beg to differ. I expect a full blown crash as thousand of panicked minions sell all their assets and try to flew the country. The banksters will be trying to burn the evidence at midnight via some shredding machine in their office.

But it's too late as Trump already has the means to charge them and throw them in jail. He's now go fair and honest Judges, and "un-classified" proof now that old man Bush died. It's a matter of days to weeks in my opinion before the shit hits the fan as criminals panic. When heads of major banks step down, retired, flea the country... and/or their financial records come out, there's going to be major turmoil in the stock market.

It's the perfect storm as the market is already in what chartists will call a large B wave up of some degree with a large C down down expected to follow afterwards. This C wave down will not just go to the 2400 SPX area (+/- 100 points) as most expect but will end up be a full blown crash... possibly another depression? Too early to tell on that one but it's possible. Anyway, enough about that... good luck to bulls and bears alike.