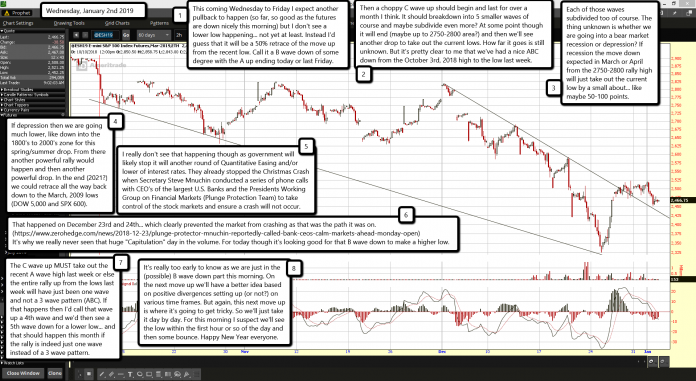 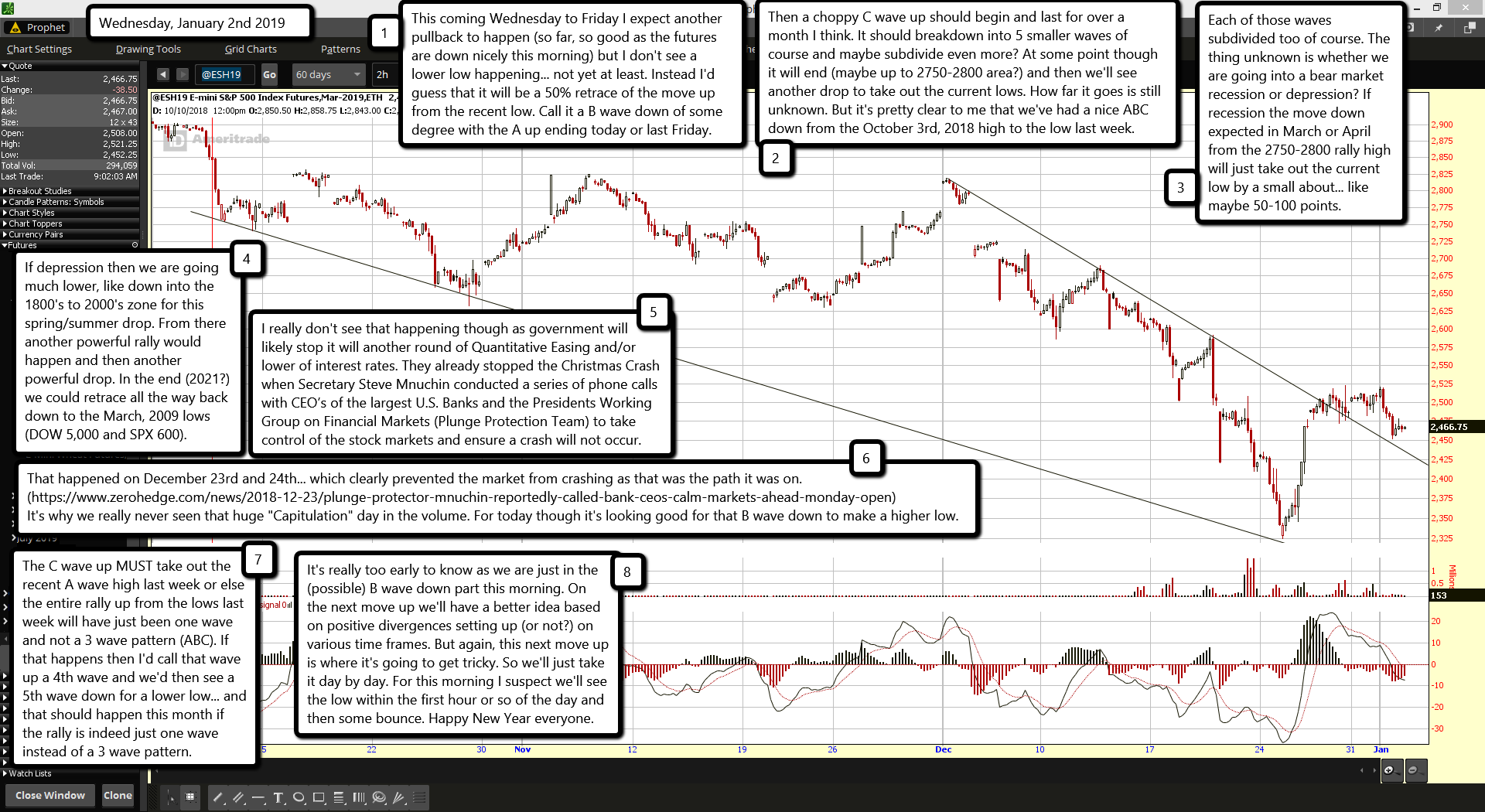 This coming Wednesday to Friday I expect another pullback to happen (so far, so good as the futures are down nicely this morning) but I don't see a lower low happening... not yet at least. Instead I'd guess that it will be a 50% retrace of the move up from the recent low. Call it a B wave down of some degree with the A up ending today or last Friday.

Then a choppy C wave up should begin and last for over a month I think. It should breakdown into 5 smaller waves of course and maybe subdivide even more? At some point though it will end (maybe up to 2750-2800 area?) and then we'll see another drop to take out the current lows. How far it goes is still unknown. But it's pretty clear to me that we've had a nice ABC down from the October 3rd, 2018 high to the low last week.

Each of those waves subdivided too of course. The thing unknown is whether we are going into a bear market recession or depression? If recession the move down expected in March or April from the 2750-2800 rally high will just take out the current low by a small about... like maybe 50-100 points.

I really don't see that happening though as government will likely stop it will another round of Quantitative Easing and/or lower of interest rates. They already stopped the Christmas Crash when Secretary Steve Mnuchin conducted a series of phone calls with CEO’s of the largest U.S. Banks and the Presidents Working Group on Financial Markets (Plunge Protection Team) to take control of the stock markets and ensure a crash will not occur.

That happened on December 23rd and 24th... which clearly prevented the market from crashing as that was the path it was on. (https://www.zerohedge.com/news/2018-12-23/plunge-protector-mnuchin-reportedly-called-bank-ceos-calm-markets-ahead-monday-open) It's why we really never seen that huge "Capitulation" day in the volume. For today though it's looking good for that B wave down to make a higher low.

The C wave up MUST take out the recent A wave high last week or else the entire rally up from the lows last week will have just been one wave and not a 3 wave pattern (ABC). If that happens then I'd call that wave up a 4th wave and we'd then see a 5th wave down for a lower low... and that should happen this month if the rally is indeed just one wave instead of a 3 wave pattern.

It's really too early to know as we are just in the (possible) B wave down part this morning. On the next move up we'll have a better idea based on positive divergences setting up (or not?) on various time frames. But again, this next move up is where it's going to get tricky. So we'll just take it day by day. For this morning I suspect we'll see the low within the first hour or so of the day and then some bounce. Happy New Year everyone.