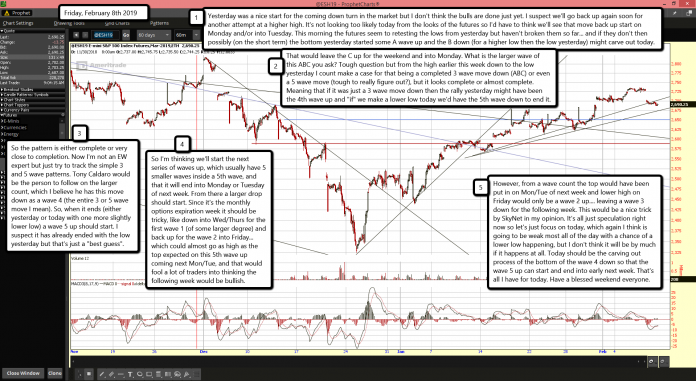 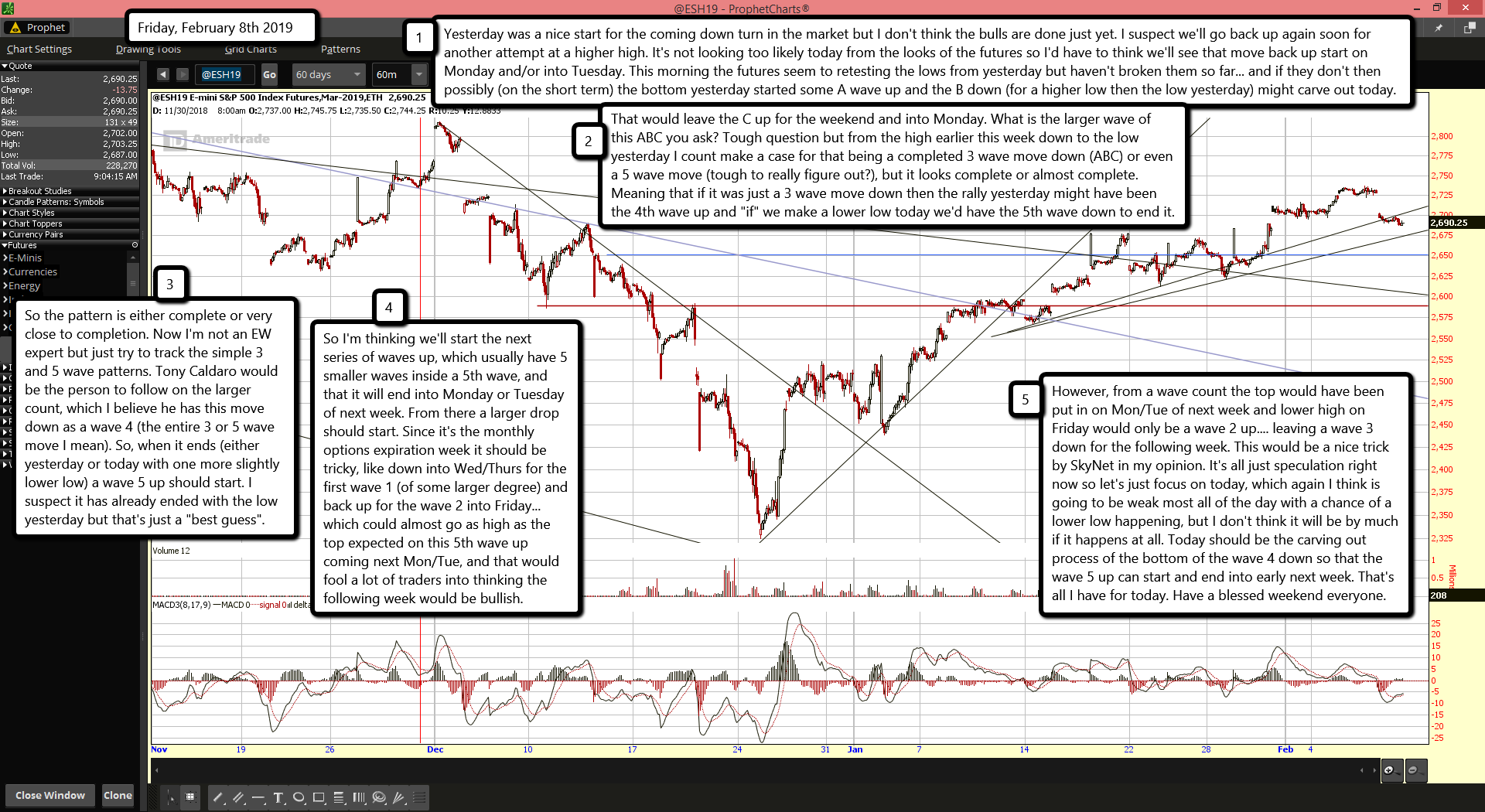 Yesterday was a nice start for the coming down turn in the market but I don't think the bulls are done just yet. I suspect we'll go back up again soon for another attempt at a higher high. It's not looking too likely today from the looks of the futures so I'd have to think we'll see that move back up start on Monday and/or into Tuesday. This morning the futures seem to retesting the lows from yesterday but haven't broken them so far... and if they don't then possibly (on the short term) the bottom yesterday started some A wave up and the B down (for a higher low then the low yesterday) might carve out today.

That would leave the C up for the weekend and into Monday. What is the larger wave of this ABC you ask? Tough question but from the high earlier this week down to the low yesterday I count make a case for that being a completed 3 wave move down (ABC) or even a 5 wave move (tough to really figure out?), but it looks complete or almost complete. Meaning that if it was just a 3 wave move down then the rally yesterday might have been the 4th wave up and "if" we make a lower low today we'd have the 5th wave down to end it.

So the pattern is either complete or very close to completion. Now I'm not an EW expert but just try to track the simple 3 and 5 wave patterns. Tony Caldaro would be the person to follow on the larger count, which I believe he has this move down as a wave 4 (the entire 3 or 5 wave move I mean). So, when it ends (either yesterday or today with one more slightly lower low) a wave 5 up should start. I suspect it has already ended with the low yesterday but that's just a "best guess".

So I'm thinking we'll start the next series of waves up, which usually have 5 smaller waves inside a 5th wave, and that it will end into Monday or Tuesday of next week. From there a larger drop should start. Since it's the monthly options expiration week it should be tricky, like down into Wed/Thurs for the first wave 1 (of some larger degree) and back up for the wave 2 into Friday... which could almost go as high as the top expected on this 5th wave up coming next Mon/Tue, and that would fool a lot of traders into thinking the following week would be bullish.

However, from a wave count the top would have been put in on Mon/Tue of next week and lower high on Friday would only be a wave 2 up.... leaving a wave 3 down for the following week. This would be a nice trick by SkyNet in my opinion. It's all just speculation right now so let's just focus on today, which again I think is going to be weak most all of the day with a chance of a lower low happening, but I don't think it will be by much if it happens at all. Today should be the carving out process of the bottom of the wave 4 down so that the wave 5 up can start and end into early next week. That's all I have for today. Have a blessed weekend everyone.