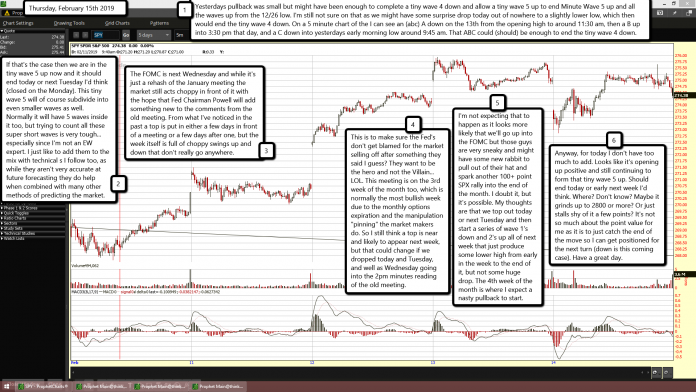 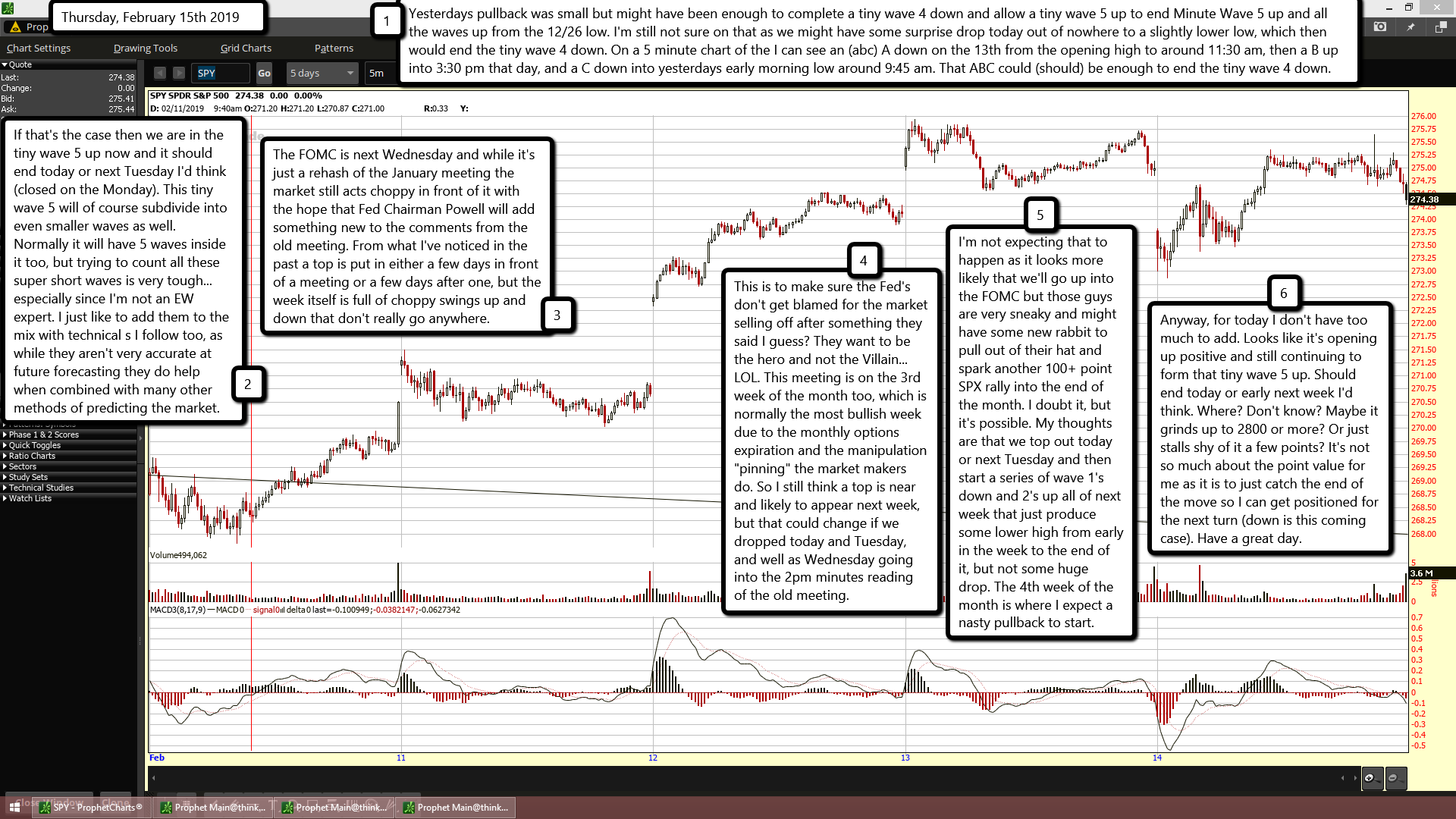 Yesterdays pullback was small but might have been enough to complete a tiny wave 4 down and allow a tiny wave 5 up to end Minute Wave 5 up and all the waves up from the 12/26 low. I'm still not sure on that as we might have some surprise drop today out of nowhere to a slightly lower low, which then would end the tiny wave 4 down. On a 5 minute chart of the I can see an (abc) A down on the 13th from the opening high to around 11:30 am, then a B up into 3:30 pm that day, and a C down into yesterdays early morning low around 9:45 am. That ABC could (should) be enough to end the tiny wave 4 down.

If that's the case then we are in the tiny wave 5 up now and it should end today or next Tuesday I'd think (closed on the Monday). This tiny wave 5 will of course subdivide into even smaller waves as well. Normally it will have 5 waves inside it too, but trying to count all these super short waves is very tough... especially since I'm not an EW expert. I just like to add them to the mix with technical s I follow too, as while they aren't very accurate at future forecasting they do help when combined with many other methods of predicting the market.

The FOMC is next Wednesday and while it's just a rehash of the January meeting the market still acts choppy in front of it with the hope that Fed Chairman Powell will add something new to the comments from the old meeting. From what I've noticed in the past a top is put in either a few days in front of a meeting or a few days after one, but the week itself is full of choppy swings up and down that don't really go anywhere.

This is to make sure the Fed's don't get blamed for the market selling off after something they said I guess? They want to be the hero and not the Villain... LOL. This meeting is on the 3rd week of the month too, which is normally the most bullish week due to the monthly options expiration and the manipulation "pinning" the market makers do. So I still think a top is near and likely to appear next week, but that could change if we dropped today and Tuesday, and well as Wednesday going into the 2pm minutes reading of the old meeting.

I'm not expecting that to happen as it looks more likely that we'll go up into the FOMC but those guys are very sneaky and might have some new rabbit to pull out of their hat and spark another 100+ point SPX rally into the end of the month. I doubt it, but it's possible. My thoughts are that we top out today or next Tuesday and then start a series of wave 1's down and 2's up all of next week that just produce some lower high from early in the week to the end of it, but not some huge drop. The 4th week of the month is where I expect a nasty pullback to start.

Anyway, for today I don't have too much to add. Looks like it's opening up positive and still continuing to form that tiny wave 5 up. Should end today or early next week I'd think. Where? Don't know? Maybe it grinds up to 2800 or more? Or just stalls shy of it a few points? It's not so much about the point value for me as it is to just catch the end of the move so I can get positioned for the next turn (down is this coming case). Have a great day.