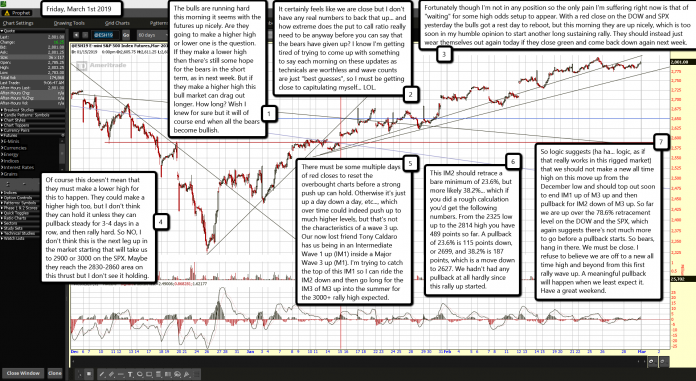 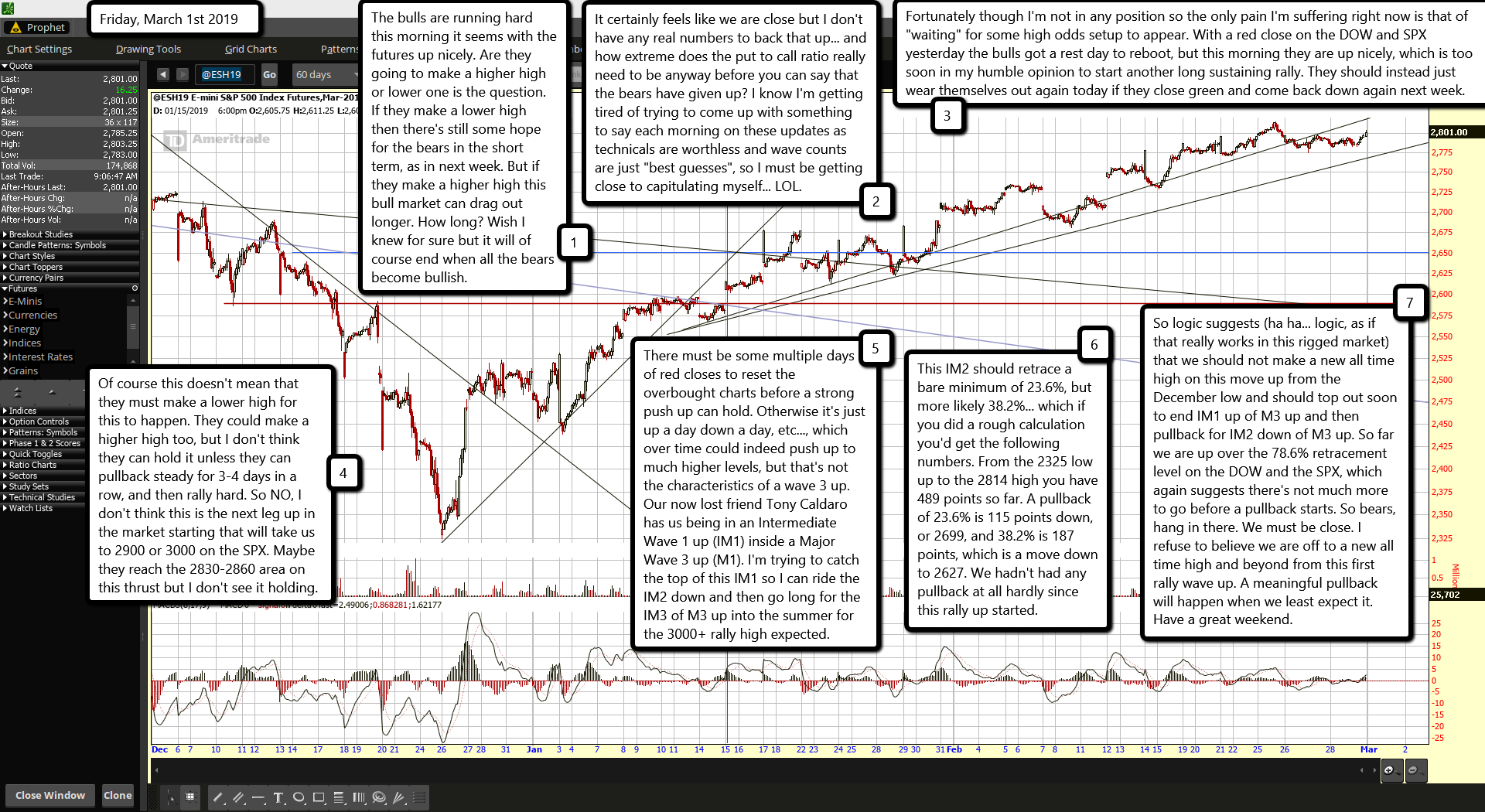 The bulls are running hard this morning it seems with the futures up nicely. Are they going to make a higher high or lower one is the question. If they make a lower high then there's still some hope for the bears in the short term, as in next week. But if they make a higher high this bull market can drag out longer. How long? Wish I knew for sure but it will of course end when all the bears become bullish.

It certainly feels like we are close but I don't have any real numbers to back that up... and how extreme does the put to call ratio really need to be anyway before you can say that the bears have given up? I know I'm getting tired of trying to come up with something to say each morning on these updates as technicals are worthless and wave counts are just "best guesses", so I must be getting close to capitulating myself... LOL.

Fortunately though I'm not in any position so the only pain I'm suffering right now is that of "waiting" for some high odds setup to appear. With a red close on the DOW and SPX yesterday the bulls got a rest day to reboot, but this morning they are up nicely, which is too soon in my humble opinion to start another long sustaining rally. They should instead just wear themselves out again today if they close green and come back down again next week.

Of course this doesn't mean that they must make a lower high for this to happen. They could make a higher high too, but I don't think they can hold it unless they can pullback steady for 3-4 days in a row, and then rally hard. So NO, I don't think this is the next leg up in the market starting that will take us to 2900 or 3000 on the SPX. Maybe they reach the 2830-2860 area on this thrust but I don't see it holding.

There must be some multiple days of red closes to reset the overbought charts before a strong push up can hold. Otherwise it's just up a day down a day, etc..., which over time could indeed push up to much higher levels, but that's not the characteristics of a wave 3 up. Our now lost friend Tony Caldaro has us being in an Intermediate Wave 1 up (IM1) inside a Major Wave 3 up (M1). I'm trying to catch the top of this IM1 so I can ride the IM2 down and then go long for the IM3 of M3 up into the summer for the 3000+ rally high expected.

So logic suggests (ha ha... logic, as if that really works in this rigged market) that we should not make a new all time high on this move up from the December low and should top out soon to end IM1 up of M3 up and then pullback for IM2 down of M3 up. So far we are up over the 78.6% retracement level on the DOW and the SPX, which again suggests there's not much more to go before a pullback starts. So bears, hang in there. We must be close. I refuse to believe we are off to a new all time high and beyond from this first rally wave up. A meaningful pullback will happen when we least expect it. Have a great weekend.