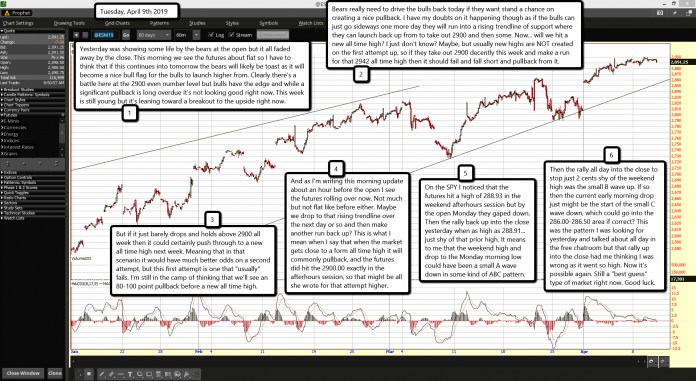 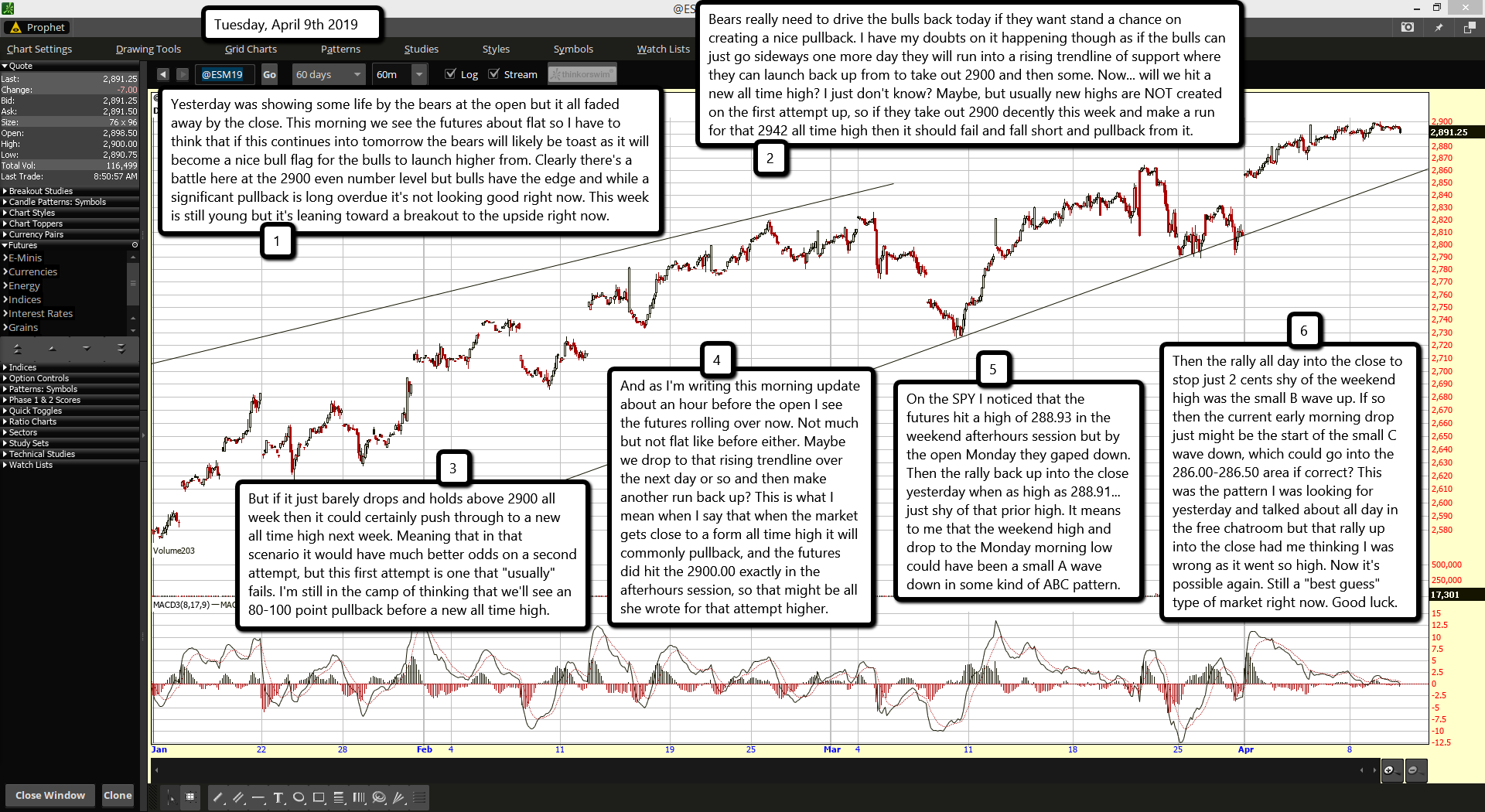 Yesterday was showing some life by the bears at the open but it all faded away by the close. This morning we see the futures about flat so I have to think that if this continues into tomorrow the bears will likely be toast as it will become a nice bull flag for the bulls to launch higher from. Clearly there's a battle here at the 2900 even number level but bulls have the edge and while a significant pullback is long overdue it's not looking good right now. This week is still young but it's leaning toward a breakout to the upside right now.

Bears really need to drive the bulls back today if they want stand a chance on creating a nice pullback. I have my doubts on it happening though as if the bulls can just go sideways one more day they will run into a rising trendline of support where they can launch back up from to take out 2900 and then some. Now... will we hit a new all time high? I just don't know? Maybe, but usually new highs are NOT created on the first attempt up, so if they take out 2900 decently this week and make a run for that 2942 all time high then it should fail and fall short and pullback from it.

But if it just barely drops and holds above 2900 all week then it could certainly push through to a new all time high next week. Meaning that in that scenario it would have much better odds on a second attempt, but this first attempt is one that "usually" fails. I'm still in the camp of thinking that we'll see an 80-100 point pullback before a new all time high.

And as I'm writing this morning update about an hour before the open I see the futures rolling over now. Not much but not flat like before either. Maybe we drop to that rising trendline over the next day or so and then make another run back up? This is what I mean when I say that when the market gets close to a form all time high it will commonly pullback, and the futures did hit the 2900.00 exactly in the afterhours session, so that might be all she wrote for that attempt higher.

On the SPY I noticed that the futures hit a high of 288.93 in the weekend afterhours session but by the open Monday they gaped down. Then the rally back up into the close yesterday when as high as 288.91... just shy of that prior high. It means to me that the weekend high and drop to the Monday morning low could have been a small A wave down in some kind of ABC pattern.

Then the rally all day into the close to stop just 2 cents shy of the weekend high was the small B wave up. If so then the current early morning drop just might be the start of the small C wave down, which could go into the 286.00-286.50 area if correct? This was the pattern I was looking for yesterday and talked about all day in the free chatroom but that rally up into the close had me thinking I was wrong as it went so high. Now it's possible again. Still a "best guess" type of market right now. Good luck.