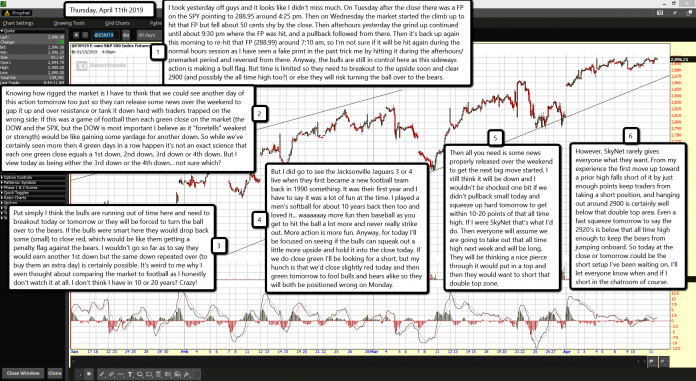 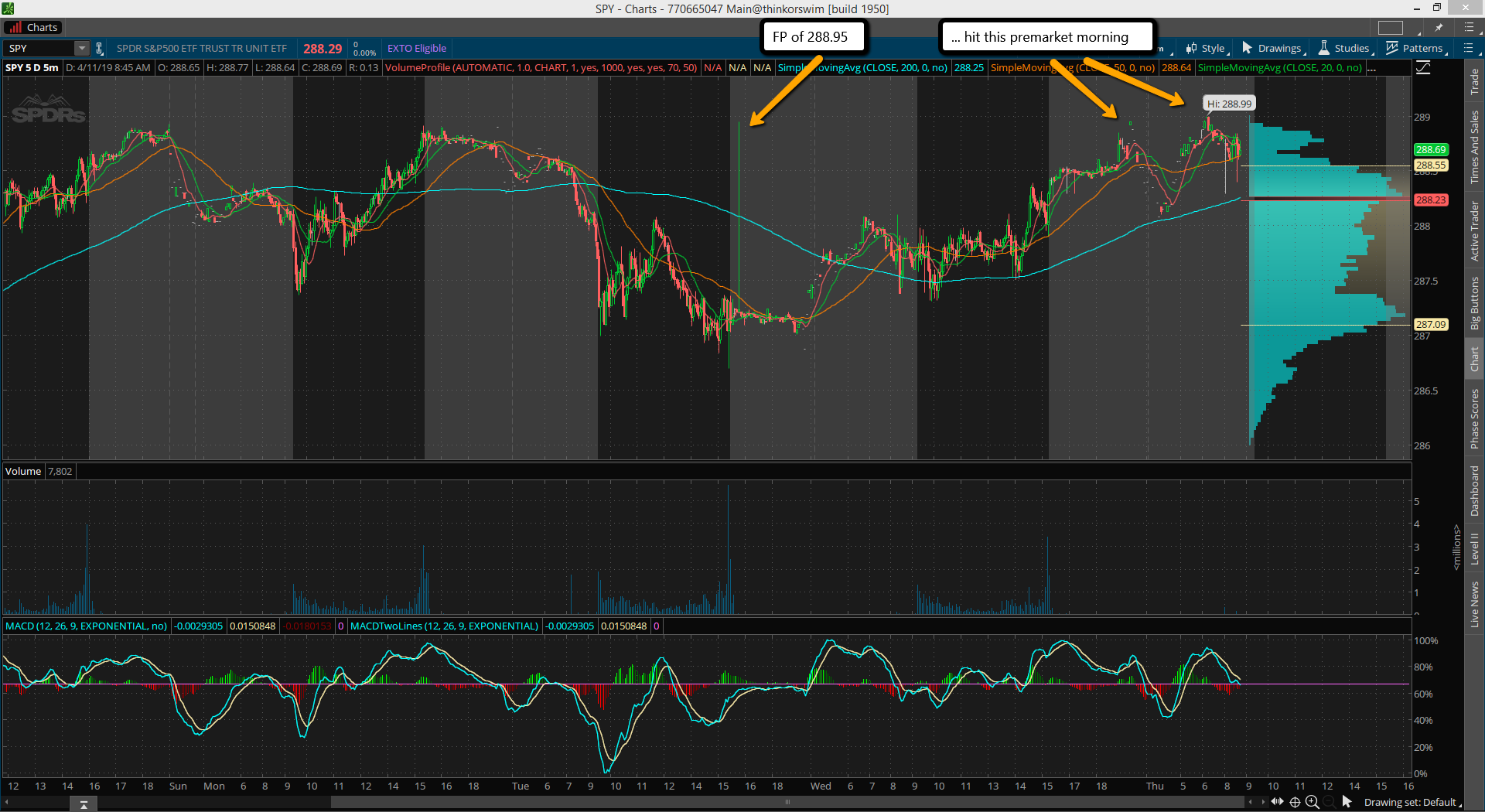 I took yesterday off guys and it looks like I didn't miss much. On Tuesday after the close there was a FP on the SPY pointing to 288.95 around 4:25 pm. Then on Wednesday the market started the climb up to hit that FP but fell about 50 cents shy by the close. Then afterhours yesterday the grind up continued until about 9:30 pm where the FP was hit, and a pullback followed from there. Then it's back up again this morning to re-hit that FP (288.99) around 7:10 am, so I'm not sure if it will be hit again during the normal hours session as I have seen a fake print in the past trick me by hitting it during the afterhours/premarket period and reversed from there. Anyway, the bulls are still in control here as this sideways action is making a bull flag. But time is limited so they need to breakout to the upside soon and clear 2900 (and possibly the all time high too?) or else they will risk turning the ball over to the bears.

Knowing how rigged the market is I have to think that we could see another day of this action tomorrow too just so they can release some news over the weekend to gap it up and over resistance or tank it down hard with traders trapped on the wrong side. If this was a game of football then each green close on the market (the DOW and the SPX, but the DOW is most important I believe as it "foretells" weakest or strength) would be like gaining some yardage for another down. So while we've certainly seen more then 4 green days in a row happen it's not an exact science that each one green close equals a 1st down, 2nd down, 3rd down or 4th down. But I view today as being either the 3rd down or the 4th down... not sure which?

Put simply I think the bulls are running out of time here and need to breakout today or tomorrow or they will be forced to turn the ball over to the bears. If the bulls were smart here they would drop back some (small) to close red, which would be like them getting a penalty flag against the bears. I wouldn't go so far as to say they would earn another 1st down but the same down repeated over (to buy them an extra day) is certainly possible. It's weird to me why I even thought about comparing the market to football as I honestly don't watch it at all. I don't think I have in 10 or 20 years? Crazy!

But I did go to see the Jacksonville Jaguars 3 or 4 live when they first became a new football team back in 1990 something. It was their first year and I have to say it was a lot of fun at the time. I played a men's softball for about 10 years back then too and loved it... waaaaaay more fun then baseball as you get to hit the ball a lot more and never really strike out. More action is more fun. Anyway, for today I'll be focused on seeing if the bulls can squeak out a little more upside and hold it into the close today. If we do close green I'll be looking for a short, but my hunch is that we'd close slightly red today and then green tomorrow to fool bulls and bears alike so they will both be positioned wrong on Monday.

Then all you need is some news properly released over the weekend to get the next big move started. I still think it will be down and I wouldn't be shocked one bit if we didn't pullback small today and squeeze up hard tomorrow to get within 10-20 points of that all time high. If I were SkyNet that's what I'd do. Then everyone will assume we are going to take out that all time high next week and will be long. They will be thinking a nice pierce through it would put in a top and then they would want to short that double top zone.

However, SkyNet rarely gives everyone what they want. From my experience the first move up toward a prior high falls short of it by just enough points keep traders from taking a short position, and hanging out around 2900 is certainly well below that double top area. Even a fast squeeze tomorrow to say the 2920's is below that all time high enough to keep the bears from jumping onboard. So today at the close or tomorrow could be the short setup I've been waiting on. I'll let everyone know when and if I short in the chatroom of course.