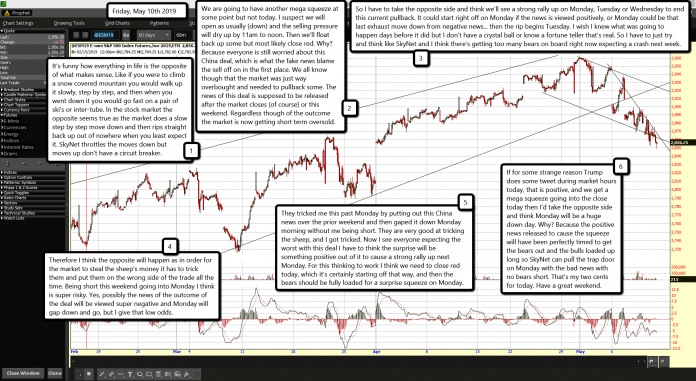 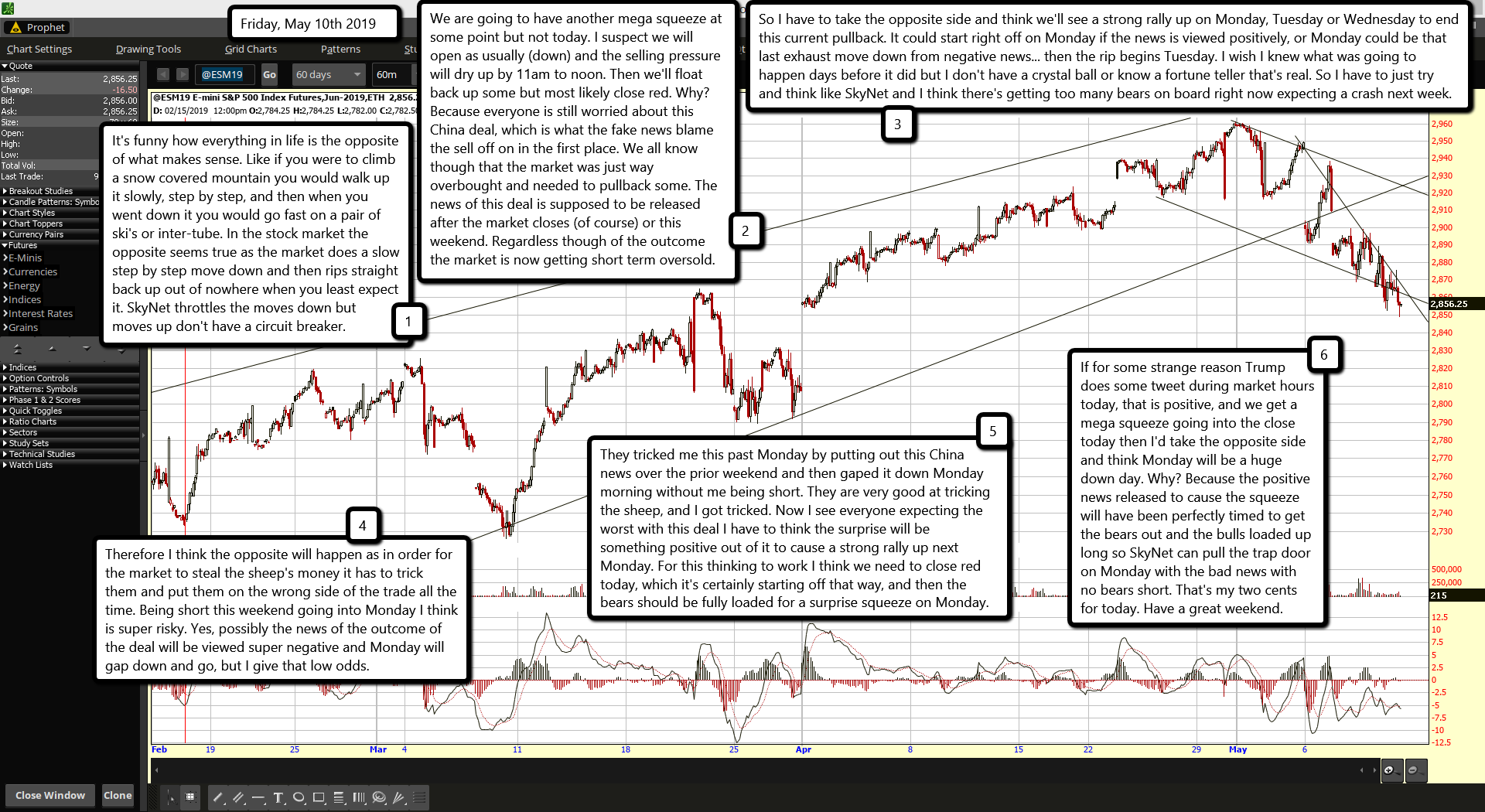 It's funny how everything in life is the opposite of what makes sense. Like if you were to climb a snow covered mountain you would walk up it slowly, step by step, and then when you went down it you would go fast on a pair of ski's or inter-tube. In the stock market the opposite seems true as the market does a slow step by step move down and then rips straight back up out of nowhere when you least expect it. SkyNet throttles the moves down but moves up don't have a circuit breaker.

We are going to have another mega squeeze at some point but not today. I suspect we will open as usually (down) and the selling pressure will dry up by 11am to noon. Then we'll float back up some but most likely close red. Why? Because everyone is still worried about this China deal, which is what the fake news blame the sell off on in the first place. We all know though that the market was just way overbought and needed to pullback some. The news of this deal is supposed to be released after the market closes (of course) or this weekend. Regardless though of the outcome the market is now getting short term oversold.

So I have to take the opposite side and think we'll see a strong rally up on Monday, Tuesday or Wednesday to end this current pullback. It could start right off on Monday if the news is viewed positively, or Monday could be that last exhaust move down from negative news... then the rip begins Tuesday. I wish I knew what was going to happen days before it did but I don't have a crystal ball or know a fortune teller that's real. So I have to just try and think like SkyNet and I think there's getting too many bears on board right now expecting a crash next week.

Therefore I think the opposite will happen as in order for the market to steal the sheep's money it has to trick them and put them on the wrong side of the trade all the time. Being short this weekend going into Monday I think is super risky. Yes, possibly the news of the outcome of the deal will be viewed super negative and Monday will gap down and go, but I give that low odds.

They tricked me this past Monday by putting out this China news over the prior weekend and then gaped it down Monday morning without me being short. They are very good at tricking the sheep, and I got tricked. Now I see everyone expecting the worst with this deal I have to think the surprise will be something positive out of it to cause a strong rally up next Monday. For this thinking to work I think we need to close red today, which it's certainly starting off that way, and then the bears should be fully loaded for a surprise squeeze on Monday.

If for some strange reason Trump does some tweet during market hours today, that is positive, and we get a mega squeeze going into the close today then I'd take the opposite side and think Monday will be a huge down day. Why? Because the positive news released to cause the squeeze will have been perfectly timed to get the bears out and the bulls loaded up long so SkyNet can pull the trap door on Monday with the bad news with no bears short. That's my two cents for today. Have a great weekend.