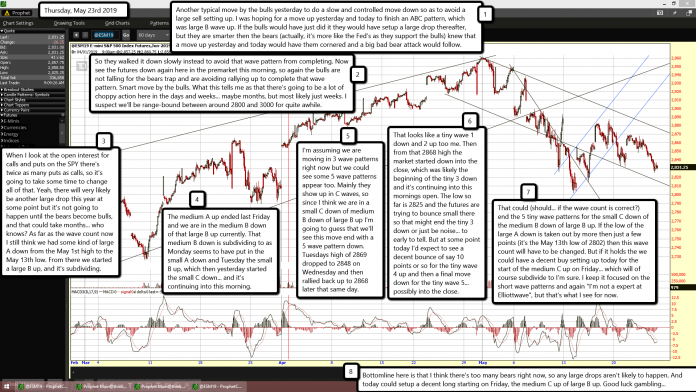 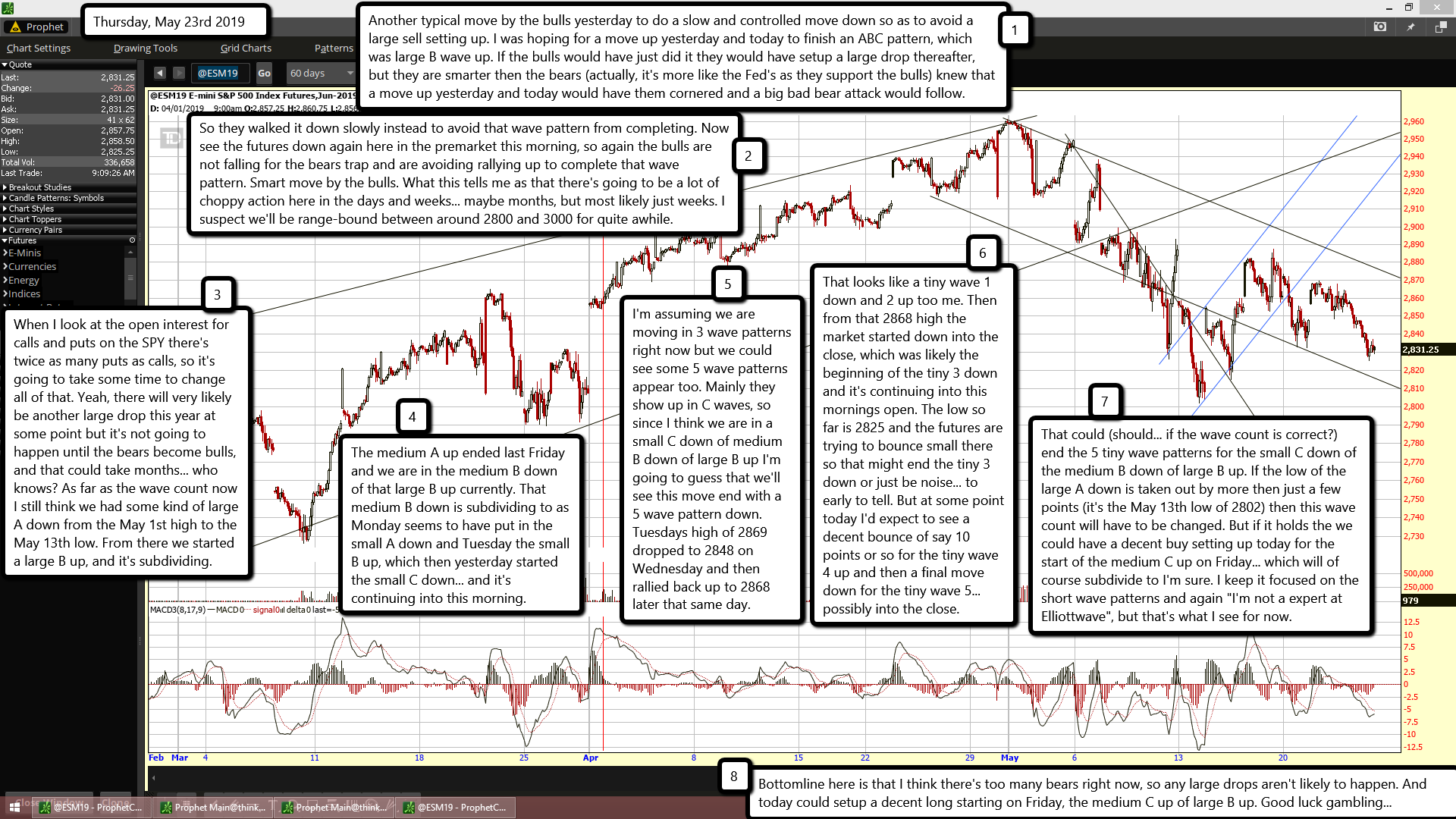 Another typical move by the bulls yesterday to do a slow and controlled move down so as to avoid a large sell setting up. I was hoping for a move up yesterday and today to finish an ABC pattern, which was large B wave up. If the bulls would have just did it they would have setup a large drop thereafter, but they are smarter then the bears (actually, it's more like the Fed's as they support the bulls) knew that a move up yesterday and today would have them cornered and a big bad bear attack would follow.

So they walked it down slowly instead to avoid that wave pattern from completing. Now see the futures down again here in the premarket this morning, so again the bulls are not falling for the bears trap and are avoiding rallying up to complete that wave pattern. Smart move by the bulls. What this tells me as that there's going to be a lot of choppy action here in the days and weeks... maybe months, but most likely just weeks. I suspect we'll be range-bound between around 2800 and 3000 for quite awhile.

When I look at the open interest for calls and puts on the SPY there's twice as many puts as calls, so it's going to take some time to change all of that. Yeah, there will very likely be another large drop this year at some point but it's not going to happen until the bears become bulls, and that could take months... who knows? As far as the wave count now I still think we had some kind of large A down from the May 1st high to the May 13th low. From there we started a large B up, and it's subdividing.

The medium A up ended last Friday and we are in the medium B down of that large B up currently. That medium B down is subdividing to as Monday seems to have put in the small A down and Tuesday the small B up, which then yesterday started the small C down... and it's continuing into this morning.

I'm assuming we are moving in 3 wave patterns right now but we could see some 5 wave patterns appear too. Mainly they show up in C waves, so since I think we are in a small C down of medium B down of large B up I'm going to guess that we'll see this move end with a 5 wave pattern down. Tuesdays high of 2869 dropped to 2848 on Wednesday and then rallied back up to 2868 later that same day.

That looks like a tiny wave 1 down and 2 up too me. Then from that 2868 high the market started down into the close, which was likely the beginning of the tiny 3 down and it's continuing into this mornings open. The low so far is 2825 and the futures are trying to bounce small there so that might end the tiny 3 down or just be noise... to early to tell. But at some point today I'd expect to see a decent bounce of say 10 points or so for the tiny wave 4 up and then a final move down for the tiny wave 5... possibly into the close.

That could (should... if the wave count is correct?) end the 5 tiny wave patterns for the small C down of the medium B down of large B up. If the low of the large A down is taken out by more then just a few points (it's the May 13th low of 2802) then this wave count will have to be changed. But if it holds the we could have a decent buy setting up today for the start of the medium C up on Friday... which will of course subdivide to I'm sure. I keep it focused on the short wave patterns and again "I'm not a expert at Elliottwave", but that's what I see for now.

Bottomline here is that I think there's too many bears right now, so any large drops aren't likely to happen. And today could setup a decent long starting on Friday, the medium C up of large B up. Good luck gambling...