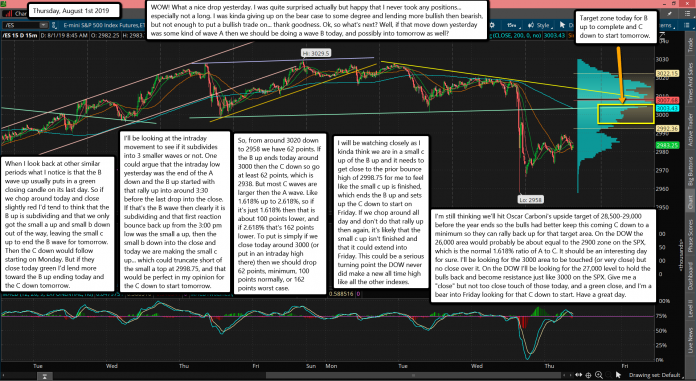 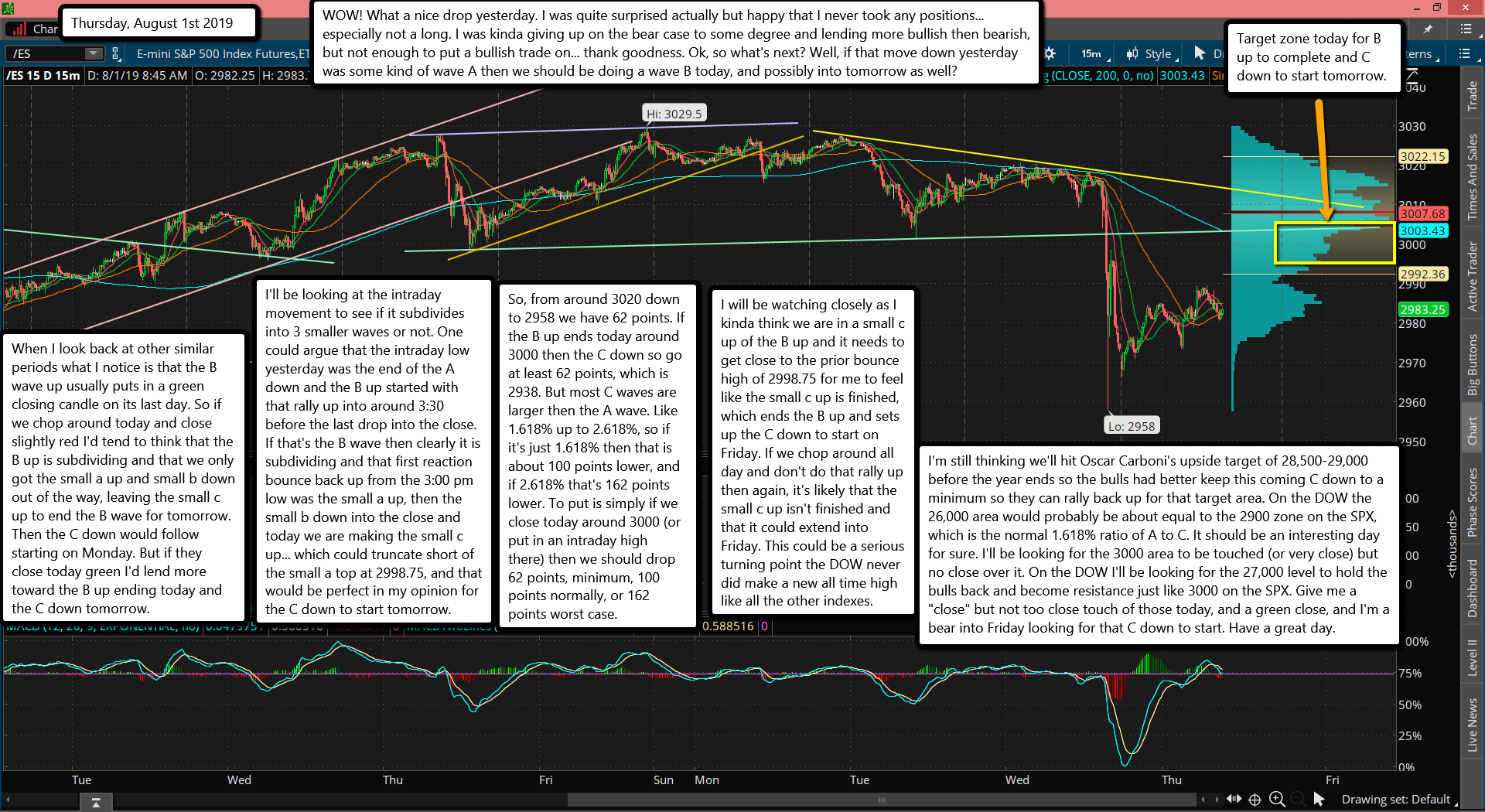 WOW! What a nice drop yesterday. I was quite surprised actually but happy that I never took any positions... especially not a long. I was kinda giving up on the bear case to some degree and lending more bullish then bearish, but not enough to put a bullish trade on... thank goodness. Ok, so what's next? Well, if that move down yesterday was some kind of wave A then we should be doing a wave B today, and possibly into tomorrow as well?

When I look back at other similar periods what I notice is that the B wave up usually puts in a green closing candle on its last day. So if we chop around today and close slightly red I'd tend to think that the B up is subdividing and that we only got the small a up and small b down out of the way, leaving the small c up to end the B wave for tomorrow. Then the C down would follow starting on Monday. But if they close today green I'd lend more toward the B up ending today and the C down tomorrow.

I'll be looking at the intraday movement to see if it subdivides into 3 smaller waves or not. One could argue that the intraday low yesterday was the end of the A down and the B up started with that rally up into around 3:30 before the last drop into the close. If that's the B wave then clearly it is subdividing and that first reaction bounce back up from the 3:00 pm low was the small a up, then the small b down into the close and today we are making the small c up... which could truncate short of the small a top at 2998.75, and that would be perfect in my opinion for the C down to start tomorrow.

I will be watching closely as I kinda think we are in a small c up of the B up and it needs to get close to the prior bounce high of 2998.75 for me to feel like the small c up is finished, which ends the B up and sets up the C down to start on Friday. If we chop around all day and don't do that rally up then again, it's likely that the small c up isn't finished and that it could extend into Friday. This could be a serious turning point the DOW never did make a new all time high like all the other indexes.

I'm still thinking we'll hit Oscar Carboni's upside target of 28,500-29,000 before the year ends so the bulls had better keep this coming C down to a minimum so they can rally back up for that target area. On the DOW the 26,000 area would probably be about equal to the 2900 zone on the SPX, which is the normal 1.618% ratio of A to C. It should be an interesting day for sure. I'll be looking for the 3000 area to be touched (or very close) but no close over it. On the DOW I'll be looking for the 27,000 level to hold the bulls back and become resistance just like 3000 on the SPX. Give me a "close" but not too close touch of those today, and a green close, and I'm a bear into Friday looking for that C down to start. Have a great day.