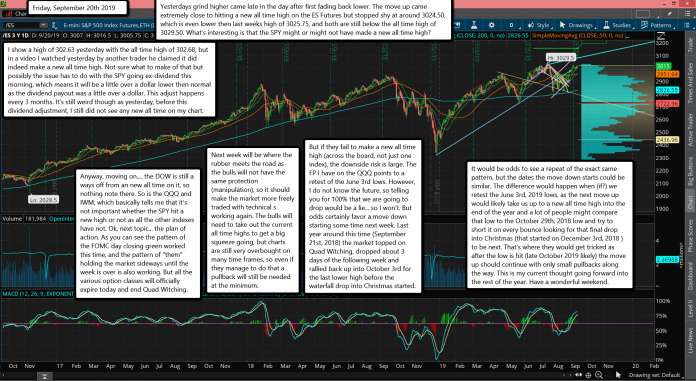 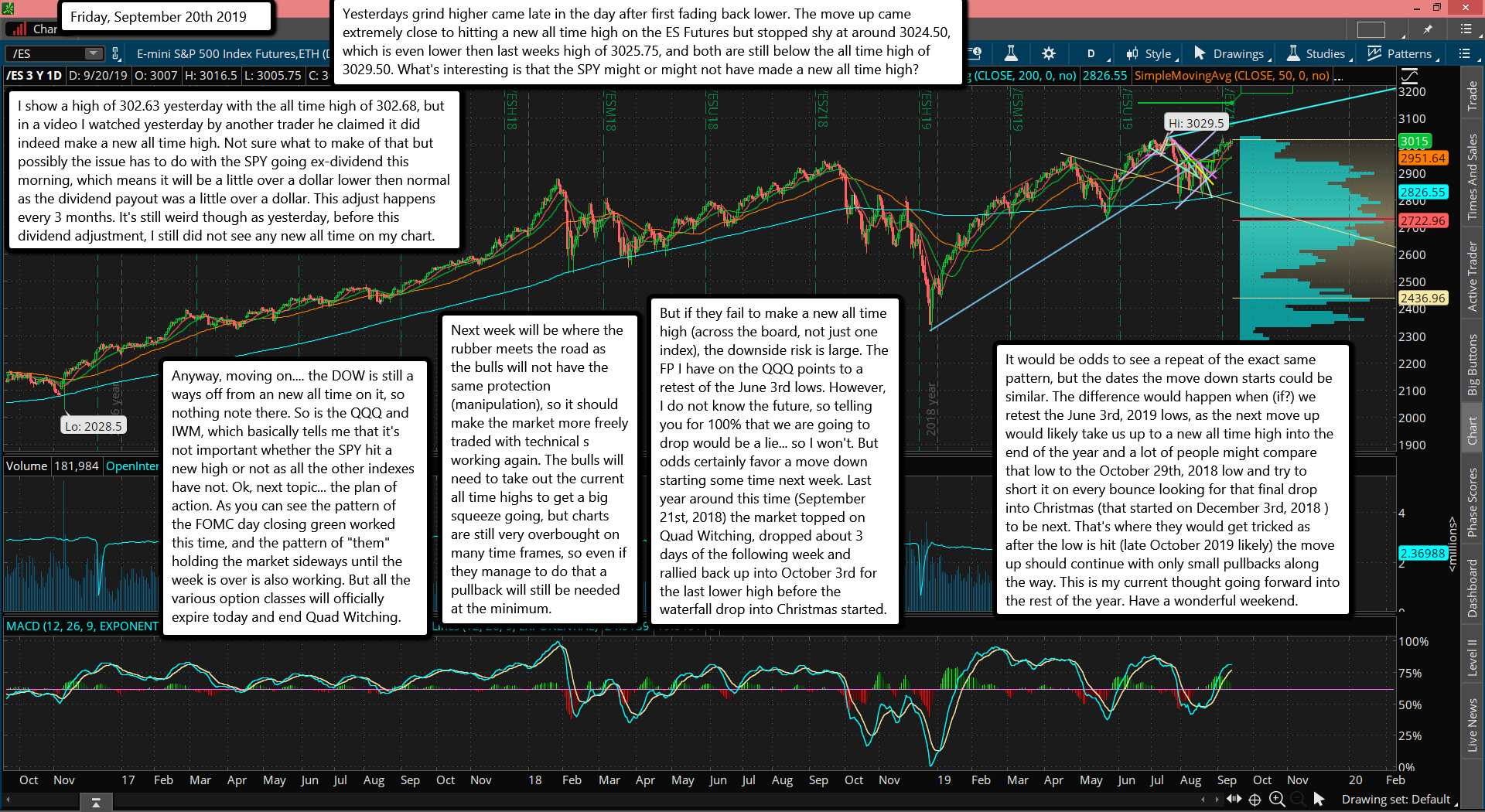 Yesterdays grind higher came late in the day after first fading back lower. The move up came extremely close to hitting a new all time high on the ES Futures but stopped shy at around 3024.50, which is even lower then last weeks high of 3025.75, and both are still below the all time high of 3029.50. What's interesting is that the SPY might or might not have made a new all time high?

I show a high of 302.63 yesterday with the all time high of 302.68, but in a video I watched yesterday by another trader he claimed it did indeed make a new all time high. Not sure what to make of that but possibly the issue has to do with the SPY going ex-dividend this morning, which means it will be a little over a dollar lower then normal as the dividend payout was a little over a dollar. This adjust happens every 3 months. It's still weird though as yesterday, before this dividend adjustment, I still did not see any new all time on my chart.

Anyway, moving on.... the DOW is still a ways off from an new all time on it, so nothing note there. So is the QQQ and IWM, which basically tells me that it's not important whether the SPY hit a new high or not as all the other indexes have not. Ok, next topic... the plan of action. As you can see the pattern of the FOMC day closing green worked this time, and the pattern of "them" holding the market sideways until the week is over is also working. But all the various option classes will officially expire today and end Quad Witching.

Next week will be where the rubber meets the road as the bulls will not have the same protection (manipulation), so it should make the market more freely traded with technical s working again. The bulls will need to take out the current all time highs to get a big squeeze going, but charts are still very overbought on many time frames, so even if they manage to do that a pullback will still be needed at the minimum.

But if they fail to make a new all time high (across the board, not just one index), the downside risk is large. The FP I have on the QQQ points to a retest of the June 3rd lows. However, I do not know the future, so telling you for 100% that we are going to drop would be a lie... so I won't. But odds certainly favor a move down starting some time next week. Last year around this time (September 21st, 2018) the market topped on Quad Witching, dropped about 3 days of the following week and rallied back up into October 3rd for the last lower high before the waterfall drop into Christmas started.

It would be odds to see a repeat of the exact same pattern, but the dates the move down starts could be similar. The difference would happen when (if?) we retest the June 3rd, 2019 lows, as the next move up would likely take us up to a new all time high into the end of the year and a lot of people might compare that low to the October 29th, 2018 low and try to short it on every bounce looking for that final drop into Christmas (that started on December 3rd, 2018 ) to be next. That's where they would get tricked as after the low is hit (late October 2019 likely) the move up should continue with only small pullbacks along the way. This is my current thought going forward into the rest of the year. Have a wonderful weekend.