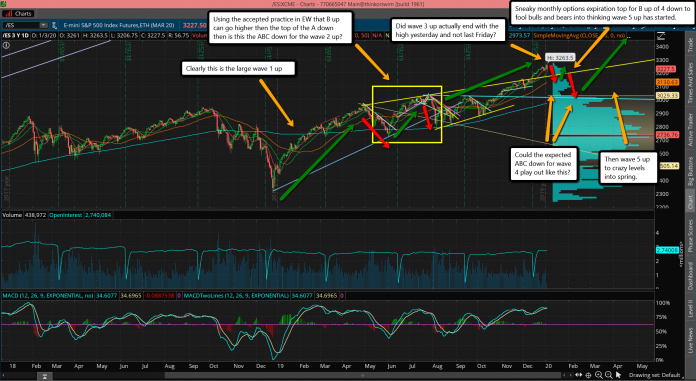 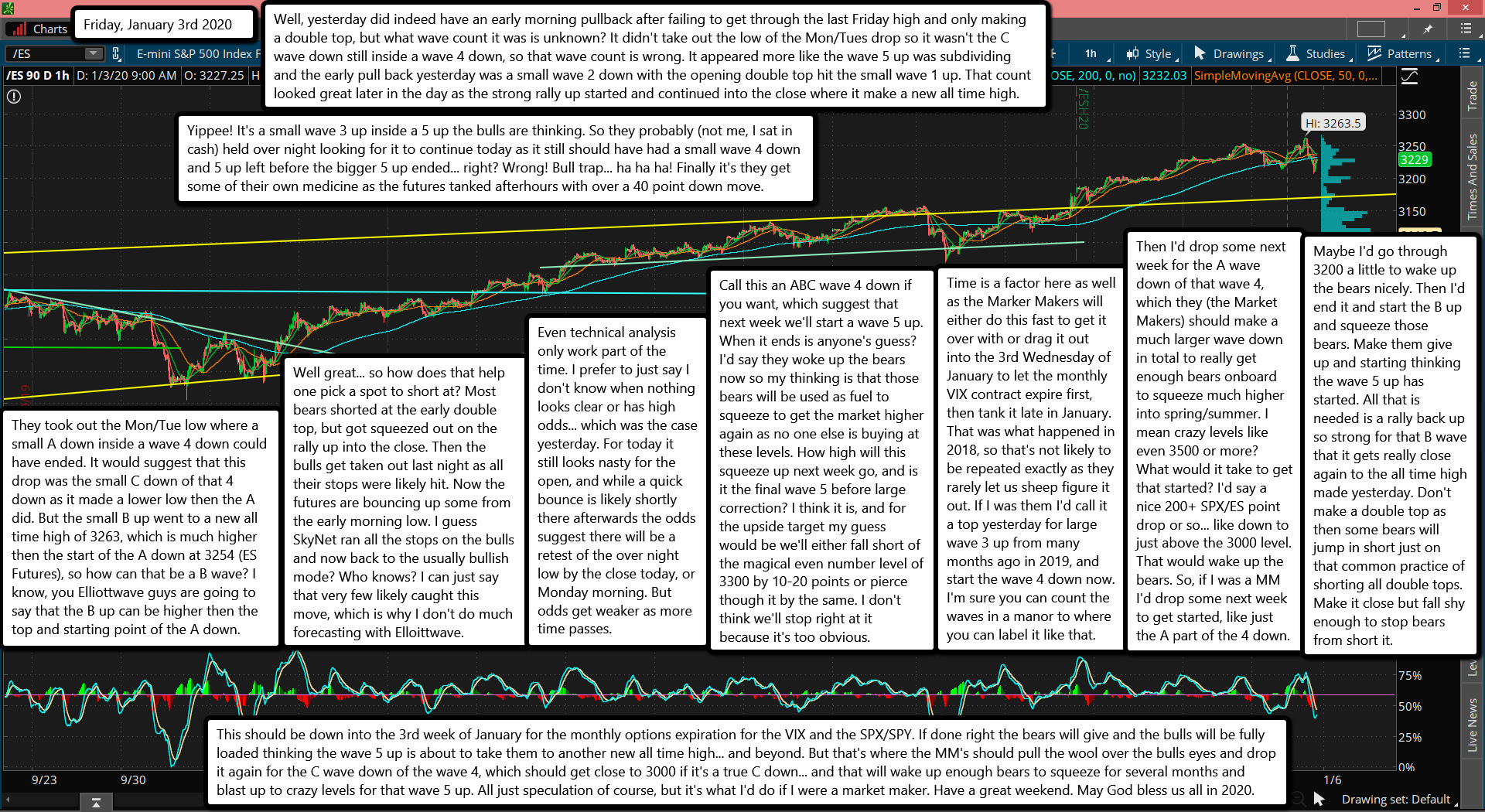 Well, yesterday did indeed have an early morning pullback after failing to get through the last Friday high and only making a double top, but what wave count it was is unknown? It didn't take out the low of the Mon/Tues drop so it wasn't the C wave down still inside a wave 4 down, so that wave count is wrong. It appeared more like the wave 5 up was subdividing and the early pull back yesterday was a small wave 2 down with the opening double top hit the small wave 1 up. That count looked great later in the day as the strong rally up started and continued into the close where it make a new all time high.

Yippee! It's a small wave 3 up inside a 5 up the bulls are thinking. So they probably (not me, I sat in cash) held over night looking for it to continue today as it still should have had a small wave 4 down and 5 up left before the bigger 5 up ended... right? Wrong! Bull trap... ha ha ha! Finally it's they get some of their own medicine as the futures tanked afterhours with over a 40 point down move.

They took out the Mon/Tue low where a small A down inside a wave 4 down could have ended. It would suggest that this drop was the small C down of that 4 down as it made a lower low then the A did. But the small B up went to a new all time high of 3263, which is much higher then the start of the A down at 3254 (ES Futures), so how can that be a B wave? I know, you Elliottwave guys are going to say that the B up can be higher then the top and starting point of the A down.

Well great... so how does that help one pick a spot to short at? Most bears shorted at the early double top, but got squeezed out on the rally up into the close. Then the bulls get taken out last night as all their stops were likely hit. Now the futures are bouncing up some from the early morning low. I guess SkyNet ran all the stops on the bulls and now back to the usually bullish mode? Who knows? I can just say that very few likely caught this move, which is why I don't do much forecasting with Elloittwave.

Even technical analysis only work part of the time. I prefer to just say I don't know when nothing looks clear or has high odds... which was the case yesterday. For today it still looks nasty for the open, and while a quick bounce is likely shortly there afterwards the odds suggest there will be a retest of the over night low by the close today, or Monday morning. But odds get weaker as more time passes.

Call this an ABC wave 4 down if you want, which suggest that next week we'll start a wave 5 up. When it ends is anyone's guess? I'd say they woke up the bears now so my thinking is that those bears will be used as fuel to squeeze to get the market higher again as no one else is buying at these levels. How high will this squeeze up next week go, and is it the final wave 5 before large correction? I think it is, and for the upside target my guess would be we'll either fall short of the magical even number level of 3300 by 10-20 points or pierce though it by the same. I don't think we'll stop right at it because it's too obvious.

Time is a factor here as well as the Marker Makers will either do this fast to get it over with or drag it out into the 3rd Wednesday of January to let the monthly VIX contract expire first, then tank it late in January. That was what happened in 2018, so that's not likely to be repeated exactly as they rarely let us sheep figure it out. If I was them I'd call it a top yesterday for large wave 3 up from many months ago in 2019, and start the wave 4 down now. I'm sure you can count the waves in a manor to where you can label it like that.

Then I'd drop some next week for the A wave down of that wave 4, which they (the Market Makers) should make a much larger wave down in total to really get enough bears onboard to squeeze much higher into spring/summer. I mean crazy levels like even 3500 or more? What would it take to get that started? I'd say a nice 200+ SPX/ES point drop or so... like down to just above the 3000 level. That would wake up the bears. So, if I was a MM I'd drop some next week to get started, like just the A part of the 4 down.

Maybe I'd go through 3200 a little to wake up the bears nicely. Then I'd end it and start the B up and squeeze those bears. Make them give up and starting thinking the wave 5 up has started. All that is needed is a rally back up so strong for that B wave that it gets really close again to the all time high made yesterday. Don't make a double top as then some bears will jump in short just on that common practice of shorting all double tops. Make it close but fall shy enough to stop bears from short it.

This should be down into the 3rd week of January for the monthly options expiration for the VIX and the SPX/SPY. If done right the bears will give and the bulls will be fully loaded thinking the wave 5 up is about to take them to another new all time high... and beyond. But that's where the MM's should pull the wool over the bulls eyes and drop it again for the C wave down of the wave 4, which should get close to 3000 if it's a true C down... and that will wake up enough bears to squeeze for several months and blast up to crazy levels for that wave 5 up. All just speculation of course, but it's what I'd do if I were a market maker. Have a great weekend. May God bless us all in 2020.