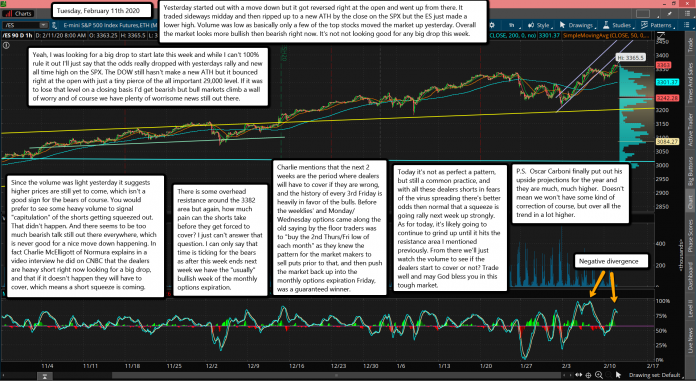 Yesterday started out with a move down but it got reversed right at the open and went up from there. It traded sideways midday and then ripped up to a new ATH by the close on the SPX but the ES just made a lower high. Volume was low as basically only a few of the top stocks moved the market up yesterday. Overall the market looks more bullish then bearish right now. It's not not looking good for any big drop this week.

Yeah, I was looking for a big drop to start late this week and while I can't 100% rule it out I'll just say that the odds really dropped with yesterdays rally and new all time high on the SPX. The DOW still hasn't make a new ATH but it bounced right at the open with just a tiny pierce of the all important 29,000 level. If it was to lose that level on a closing basis I'd get bearish but bull markets climb a wall of worry and of course we have plenty of worrisome news still out there.

Since the volume was light yesterday it suggests higher prices are still yet to come, which isn't a good sign for the bears of course. You would prefer to see some heavy volume to signal "capitulation" of the shorts getting squeezed out. That didn't happen. And there seems to be too much bearish talk still out there everywhere, which is never good for a nice move down happening. In fact Charlie McElligott of Normura explains in a video interview he did on CNBC that the dealers are heavy short right now looking for a big drop, and that if it doesn't happen they will have to cover, which means a short squeeze is coming.

There is some overhead resistance around the 3382 area but again, how much pain can the shorts take before they get forced to cover? I just can't answer that question. I can only say that time is ticking for the bears as after this week ends next week we have the "usually" bullish week of the monthly options expiration.

Charlie mentions that the next 2 weeks are the period where dealers will have to cover if they are wrong, and the history of every 3rd Friday is heavily in favor of the bulls. Before the weeklies' and Monday/Wednesday options came along the old saying by the floor traders was to "buy the 2nd Thurs/Fri low of each month" as they knew the pattern for the market makers to sell puts prior to that, and then push the market back up into the monthly options expiration Friday, was a guaranteed winner.

Today it's not as perfect a pattern, but still a common practice, and with all these dealers shorts in fears of the virus spreading there's better odds then normal that a squeeze is going rally next week up strongly. As for today, it's likely going to continue to grind up until it hits the resistance area I mentioned previously. From there we'll just watch the volume to see if the dealers start to cover or not? Trade well and may God bless you in this tough market.

P.S.  Oscar Carboni finally put out his upside projections for the year and they are much, much higher.  Doesn't mean we won't have some kind of correction of course, but over all the trend in a lot higher.